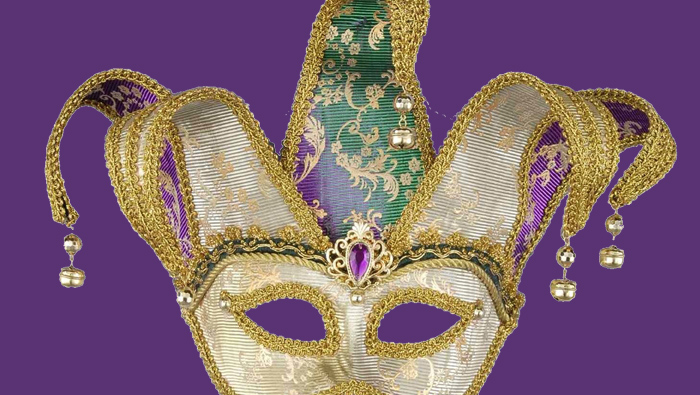 Grab your groggers and make some noise, because Purim arrives the evening of Saturday, March 11. This joyous, raucous festival commemorates the thwarting of a plot to kill the Jews of ancient Persia. Purim is unlike any other Jewish holiday – Jews drink to excess, don fanciful costumes and masks, put on plays and carnivals, and, oh yes, make a lot of noise.

Purim is both a celebration of the Jewish people’s resilience in the face of its enemies and a time to raise a glass, raise the roof and turn convention on its head. It is also a time of giving and charity. Purim is hands down the most jubilant day on the Hebrew calendar. The story of how Purim came to be is something of a mystery, but who doesn’t love a mystery?

The origins of Purim are shrouded by time and are the subject of endless debate. The most astonishing possibility is that Purim initially may not have been a Jewish holiday. Purim may have been adapted from a pagan festival, possibly Babylonian in origin. The names Mordechai and Esther from the Purim story appear to have been derived from the names of the Babylonian gods Marduk and Ishtar.

The Purim story is found in the Book of Esther, also known as the Megillah, which means scroll in Hebrew. The Megillah has been dated to approximately 400 BCE and was the final book to be added to the Tanach, or Hebrew Bible. The Purim story is one of only two books in the Tanach not to mention the name of G-d. Many biblical scholars consider the events to be apocryphal.

Public reading of the Book of Esther on Purim has been documented from at least the third century BCE. Writing in the first century, Roman-Jewish historian Flavius Josephus described observance of the holiday, then known as Mordechai Day. After the destruction of the Temple in Jerusalem, the rabbis began to formalize Purim observance, such as deciding to read the whole Megillah (thus the phrase the whole megillah!). The holiday continued to evolve until the end of the Talmudic era around the fifth century CE, when it began to resemble the festival we celebrate today.

Purim plays, or spiels, which are humorous, lighthearted or even ribald retellings of the Purim story, gained popularity in the Middle Ages, as did Purim carnivals. The custom of donning costumes on Purim began around the same time. Purim is the one day when it is halachically permissible to cross-dress. With the influence of Italian commedia dell’arte in the 17th century, Purim masquerades and balls became widespread, as did the prominence of Purim jesters and fools.

In modern times, biblical costumes compete with superheroes and Disney princesses on Purim. Purim is often referred to as Jewish Halloween. There is also a touch of April Fools’ Day in the air as the day is full of frivolity, silliness and lighthearted fun. For example, the Jewish  newspaper The Forward publishes an annual Purim issue called The Backward, which is filled with satirical articles, jokes and nonsense.

Purim is also time to rejoice in the perseverance of the Jewish people in spite of our many detractors over the years. The perpetrator of the diabolical plot to kill the Jews was Haman, royal vizier to King Ahasuerus. Haman was presumed to be a descendant of King Agag of Amalek, the Amalekites being a perennial enemy of the Jews. Amalek and Haman are understood to represent foes of the Jewish people – past, present and future. The Purim practice of shouting and making noise with groggers is meant to blot out the name of Haman and by extension all the enemies of the Jews. Thus by blotting out Haman’s name we are erasing him from memory, at least temporally, aided of course by a few stiff drinks. Purim is a chance for Jews to really let their hair down. In the Talmud, Jews are advised to drink on Purim until one cannot distinguish between the phrases “cursed be Haman” and “blessed be Mordechai.”

Purim has traditionally been a time for tzedakah or charity. This tradition comes from the Book of Esther (9:22), which instructs Jews to give portions of food to their friends and relatives (mishloach manot) and to the poor (matanot l’evyonim). This helps to make sure everyone in the community can participate in the Purim feast. Make Purim a time for tzedakah, or social justice, by donating to a local food bank or Jewish Family and Child Services. Another charitable Purim tradition is known as the giving of the half coins (or Machatzit Ha Shekel). At the time of the Second Temple, Jews were required to donate a half shekel toward upkeep of the Temple and purchase of sacrificial animals during the Hebrew month of Adar (Purim is on the 14th of Adar). In the spirit of this tradition, some Jews make a donation to their synagogue or havurah or give a gift of coins to a beggar.

In the Purim story, Queen Esther hides her Jewish identity from her king. In the Talmud, it is said that Queen Esther subsisted primarily on beans to observe the dietary laws on the down low, so it is customary to eat dishes featuring beans and chickpeas on Purim. The most well-known Purim treat is hamantaschen, so named for its resemblance to Haman’s tri-cornered hat. The folded pastry is filled with fruit or poppy seeds. Kreplach are also popular on Purim. Think of them as a sort of savory version of hamantaschen. While they also look like the hat of the wicked Haman, they are essentially a meat dumpling. For dessert you can bake a Shikkera babka, which translates as “drunken grandma.” It is a babka cake popularly drizzled with whiskey-laced syrup.

While only a minor festival, Purim appeals to young and old alike, and has become a treasured tradition. In the Book of Esther it is written “that these days (of Purim) should be remembered and kept throughout every generation, every family, every province, every city…” (9:28). Therefore, it’s up to each of us to keep the spirit of the holiday alive. So this Purim, raise your glass high, curse Haman and drink deeply to life! L’Chaim!