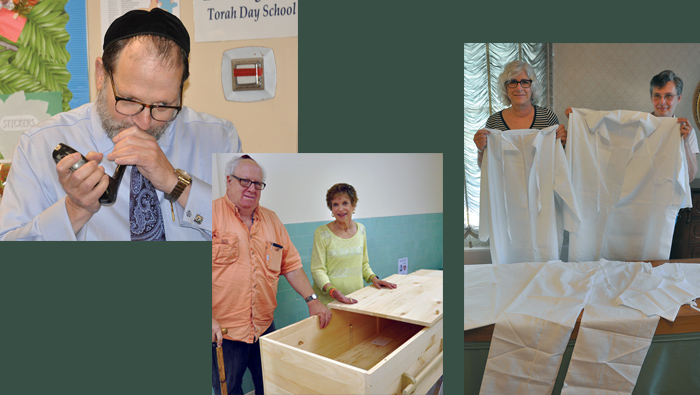 Judaism requires the utmost respect be given to the deceased.

Volunteers at two burial societies (see box) in the Portland area provide the ultimate kindness at the end of life as they perform the traditional ritual of preparing individuals for burial. Chevra kadisha literally translates as “holy society.”

“The chevra kadisha is dedicated to holiness,” says Rabbi Tzvi Fischer of the Portland Kollel. “Our tradition teaches us that people live on. Their soul lives on as well as their actions live on in this world … through the people they impacted.”

Volunteers carry out the ritual of washing, purifying and dressing the deceased, with men caring for men and women caring for women to maintain modesty even in death. Since Judaism promotes the dignity of all with all being treated equally in death, the deceased is dressed in simple shrouds and buried in a plain wooden (usually pine) box.

“Probably about half of the Jewish burials (we do) don’t have tahara,” according to Cameron Holmes, general manager of the 162-year-old, family-owned funeral home where both chevras frequently carry out the mitzvah. “We try to educate them (the family) on what the chevra can do.”

Making sure the community knows about the significance and meaning of tahara is important to volunteers of both chevra, who also perform tahara at River View Cemetery Funeral Home and Young’s Funeral Home.  Technically tahara is the continuous stream of water poured over the body to act as a mikvah to purify the body for the final transition in the lifecycle. But Rabbi Fischer says that the term has come to be used for the entire preparation, from washing and dressing the body to placing the deceased in the casket.

“If people knew about it ahead of time, they would want it,” says Rochelle Rosenberg, who leads Chevra Kavod Hamet. “We have to go out to people and talk to the rabbis and go to hospitals and talk to the chaplains.”

Rochelle’s predecessor, Sandy Axel, adds, “One of the beauties of Jewish burial practice is it is very structured. It is about honoring and taking care of the person who has died. After burial it shifts to taking care of the mourner.”

Respecting the dead is the primary focus of tahara, says Michael Rosenberg, who has organized the Chevra Kadisha of Portland for more than 20 years. “We have performed tahara on people who are not halachically Jewish. We have to respect the dead – that is universal. There is nothing wrong with performing an act of kindness for the dead.”

Michael says he often relies on Rabbi Elhanon Zohn, head of the chevra in the Queens and a recognized expert, for advice on any issues that arise. “There is nothing he hasn’t seen, and he talks you through it,” says Michael.

Volunteers of both chevras say that performing the burial ritual is incredibly rewarding.

“It’s natural to have apprehensions, but when you get to helping it feels natural and unintimidating,” says Michael. “You feel love and respect for the person in front of you, who is totally helpless and needs your help. After helping once, a lot of people say, ‘please call me again.’ ”

“It’s a very special feeling,” he adds. “You feel you are doing something important, and it gets deep into who we are as a people.”

Charlie Rosenblum has been a chevra volunteer since 1997 and is also a member of the joint Shir Tikvah, Kol Shalom and P’nai Or cemetery committee that oversees the Jewish cemetery at River View Cemetery.

After a friend from Torah study took him to observe tahara, Charlie says, “It struck me that this is something I can do and I should do.”

Sharon Segal also was moved when she went to her first tahara. “I saw the film “Plain Pine Box” and it really spoke to me,” says Sharon, who has been a chevra volunteer for about five years. “We are the last people to see this person. It feels spiritual and holy and like you are doing something really good.”

Typically families who choose tahara have a $60 charge added to their funeral home bill to cover supplies for the procedure. However, that fee is waived for burials coordinated by Hesed Shel Emet, a nonprofit that provides an honored burial for individuals who could not afford to plan for their own Jewish burial in keeping with the traditions and practices of Judaism.

Though the chevra volunteers speak generally about the mitzvot they perform, each tahara is anonymous. The family does not know who volunteered to prepare their loved one for burial, and the participants do not speak of it publically.

That contributes to the selfless mitzvah, as neither the deceased nor the family can thank the volunteer for offering this ultimate kindness.