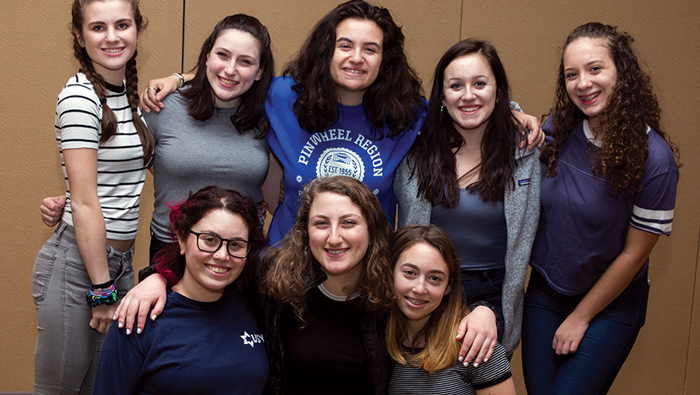 “My favorite part of convention every year is opening session,” says Glass. Before it begins, the regions meet in separate rooms wearing matching shirts that represent their region. One by one, regions run into the main ballroom singing their song and cheering. I have never witnessed as much ruach (spirit) as I do at opening session, and this year did not disappoint.”

As regional president, Hannah introduced the Pinwheel Region through a song on stage in front of the convention. When all the regions are in the ballroom, the teens sing and dance to Israeli pop music and Jewish songs.

“One of the best parts is reuniting with friends who you hadn’t seen yet in the middle of all the craziness,” says Hannah. “A room full of nearly 1,000 staff and USYers passionately singing Jewish songs is definitely an unforgettable and unique experience and an image that will stick with me.”

“This was a wonderful opportunity for our teens from Portland to become a part of the larger Jewish world,” says Neveh Shalom Education Director Rabbi Eve Posen, who joined the teens at the convention. “They joined together with 600 other teens who are passionate about their Judaism and learned together, sang together and had a wonderful time building friendships that will last a lifetime.”

This year’s conventions marked the creation of USY’s partnership with NOAM, its sister youth movement that reaches Masorti teens globally. USY hosted young adults from 10 countries including Israel, Argentina, Ukraine and Uganda to kick off a yearlong pairing of NOAM’s global chapters with USY regions. This new program will help foster lasting relationships among Jewish teens from diverse backgrounds, as well as global learning initiatives and social action projects.

The Pinwheel Region has been paired with the NOAM chapters in Madrid, Spain.

“We are excited to bring together our teens to create global connections and discuss their shared future as leaders of Masorti/Conservative Judaism,” said Rabbi David Levy, USCJ’s senior director, teen learning.

The convention focused on the theme Chazak, Chazak, v’Nitchazek, which translates to Be Strong, Be Strong, May We Be Strengthened. Through interactive educational programming, community service, and talks from peers and leading professionals, the convention built teens’ capacity as Jewish leaders, individuals and advocates.

“USYers will leave feeling empowered to create positive change … and build a stronger future for themselves (and) their communities,” said teen co-chairs Noa Rose and Harrison Steier. “We will grow together and learn to overcome modern challenges in a Jewish context.”

The convention also exposed teens to local Texas culture, which included visits to the Fort Worth Stockyards, a large-scale kosher BBQ at “the World’s Largest Honky-Tonk,” Billy Bob’s Texas, and a private evening at the Perot Museum of Nature and Science.