Photo: Ed and Jill Neuwelt with the bust of Aristides de Sousa Mendes and Henri Dyner, who was 3 years old when his parents and grandparents received visas from Aristides allowing the family to escape to Portugal.

A Portland couple had a memorable trip this summer when they joined a tour group that included descendants of both Holocaust survivors and the Portuguese diplomat who issued visas to allow them to escape Nazi-occupied Europe.

From June 28 to July 10, Jill and Edward Neuwelt joined the trip to “Retrace the footsteps of the rescuer Aristides de Sousa Mendes and the refugees he saved in 1940.” The guided tour began in Bordeaux, France, and ended in Lisbon, Portugal.

As the daughter of refugees who returned to Vienna after World War II, Jill has had a life-long interest in 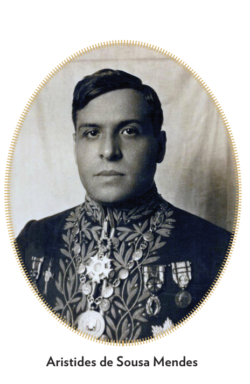 the Holocaust, but her parents did not discuss it. She moved to the states in her 20s, married Ed, and raised her family. In 2000, she began working with Holocaust survivors at Jewish Family and Child Service. After retiring in 2012, she took a Portland State University course about the Holocaust. While the course was excellent, she says Aristides was not mentioned.

That lack of recognition for saving an estimated 30,000 refugees at great cost to himself and his family is one reason Aristides family and the Sousa Mendes Foundation organized the summer journey.

Silverio de Sousa Mendes, the grandson of Aristides, wrote in an introduction to the journey, “Aristides de Sousa Mendes and his wife, Angelina de Sousa Mendes, who in June 1940, granted visas to an estimated 30,000 Jewish and non-Jewish refugees against (Portuguese Prime Minister Antonio de Oliveira) Salazar’s orders, should guide us in complex times such as today, when Europe faces the largest refugee drama since the Second World War. If there were more awareness, especially on the part of politicians, influencers and other decision makers… the world would not be as it is.”

When Jill read about the trip, she and Ed signed up. Jill says Ed “went to do me a favor, but it far exceeded his expectations.”

Ed, a professor of neurology at OHSU and the director of the University’s Blood-Brain Barrier Program, agrees he went to “humor her, but it was really an impressive experience.”

“That man paid a heavy price for his commitment to saving Jews,” says Jill. For disobeying Salazar’s order not to issue visas to Jewish and stateless refugees, Sousa Mendes was stripped of his diplomatic post and was unable to earn a living to support his 15 children, who were blacklisted and prevented from attending university in Portugal, where Salazar remained Prime Minister until 1968 and his authoritarian regime continued until 1974.

The family also lost their ancestral home, Casa do Passal.

“They have a school where he had his home until he couldn’t afford it,” says Ed. “They are using his (Aristides) life as a theme for the students … to right wrongs… I was very impressed with that.” 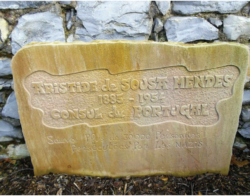 Ed encouraged the high school and university teachers on the trip to seek statistical information on how studying rescuers such as Aristides could impact their students.

Dyner wrote about his reason for joining the journey: “To reconnect to a distant past and very important phase of my early life. This trip is also in memory of my parents, who had the good fortune and intuition to undertake to flee from Europe at the right time, thereby saving my life. And last but not least, to remember Aristides de Sousa Mendes, this outstanding, righteous and principled human being who, through his sacrifice, dedication and bravery, saved so many people, including our family. His example stands out today more than ever before when we see with trepidation a rebirth of Nationalism and increase in unashamed racism and bigotry.”

'Portland couple retraces steps of Holocaust hero' has no comments