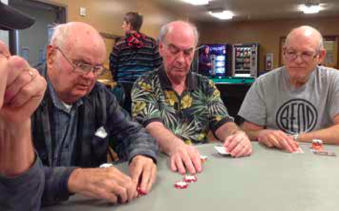 My father is 82. When he told me about the Thursday poker game at the Elsie Stuhr Senior Center in Beaverton, it sounded like a great idea. I’d learn to play cards and see my dad, who always attended the Thursday dance in the large ballroom down the hall. When I sat down for the first time, I felt a little out of place, being far younger than the rest of the people around the poker table.

I’ll never forget that game. I had a very good hand and ended up going one on one with a gentle, angelic-looking woman named Barbara. I bet big. She matched me. When I turned my cards over, I felt intensely guilty for what I was about to do to her. She looked my hand over, nodded slightly and said in a grandmotherly voice, “I’m sorry, dear.” I had a flush. She had a full house and took half of my chips without batting an eye.

That’s when the lesson began.

I’ve always looked at older people through the lens of a life already lived. They were the sum total of their traits: false teeth, gray hair and bad hearing. I had no connection to them. Their chapter was over. I was still in the middle of mine.

Then I got to know them. There was Ken, who used to be a fireman and did watercolors when he travelled through Europe. And Nick, who used to build ships, and Jerry the former accountant. Every one of those people at the table used to be my age, with families and jobs and responsibilities. They walked without canes and had busy, packed lives and hurried from place to place because the day just didn’t have enough hours in it. Just a few short years ago, they lived my life. And in a few short years, I would be living theirs. In fact, it’s happening now. To a 20-something, I’m ancient.

That wasn’t the lesson, though.

I co-wrote a book about getting rid of mental garbage: a guide that acts like waste management for your mind. Barbara was interested in the book and bought a copy. When she finished it, she bought five more and handed them out to her family to read. Nick bought one for himself. Two weeks later, he bought another one for his ex-wife. Word spread, and pretty soon the folks in the ballroom were buying copies.

Why would people in their supposed “twilight” years be interested in a book about mental trash? I thought about the friendships I was forming around that poker table, and the answer slowly became clear. It doesn’t matter that a person is 70 or 80 years old. They want to get rid of the burdens they’ve been carrying around no less than a person in his or her 30s.

This realization blew up the stereotype I’ve had about older people: they’re rigid, they’re done learning and they can’t (and don’t want to) change. You see, I had this notion that once a person retires, they magically shed all of the emotional burdens they carried throughout their life. However, once I began to see those people at the Stuhr Center as having burdens no different from mine, I realized the folly of my thinking. We all want a lighter load, no matter how old we are.

Now I don’t care if Rick can’t hear me very well, or that Mike’s hand trembles when he deals. It doesn’t mean they’re old, any more than having a driver’s license means I’m young. They’re just people living their lives. They still have dreams and desires and ambitions just like me. Sure, they may look different than they did 30 years ago, but the desire to dump their trash is no different from anyone else. Knowing that I’ll still be working to better myself gives me something to look forward to, even when my back starts to hunch over and my skin starts to wrinkle.

The Torah considers old age a virtue and a blessing, and Leviticus instructs us to honor and respect the elderly. What I’ve learned is that respect goes a lot deeper than just giving up your seat on the bus. It’s recognizing that the elderly aren’t invisible – that their decades of hard work, achievement and learning aren’t suddenly worthless just because they don’t have a job or they’re past a certain age.

A year has gone by, and I still play poker at the Stuhr Center. Truth be told, I’m not much of a card player, but I don’t care. When I come away from that table, I feel like a winner.

Steven Kaufman is co-author of the book The Garbageman’s Guide To Life: How To Get Out of the Dumps (thegarbagemansguide.com). Known among friends as a brainiac with an incessant curiosity, Steven graduated with honors from Stanford University. He traveled the world helping Fortune 500 companies clean up their operations and now spends his time talking trash – that is, passionately teaching and speaking about waste management for the mind.

'Poker, aging and taking out the trash' has no comments