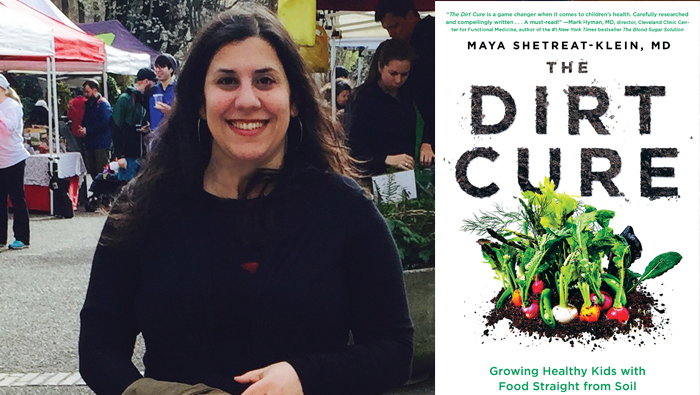 “When many of us grew up, getting dirty was something we all did,” says Dr. Maya Shetreat-Klein, a pediatric neurologist and urban farmer. “We were outside playing with friends, rolling down hills. We have given up something critical we had as children and are not offering it to our children. It seems to strike a chord for many people.”

In her 2016 book, The Dirt Cure: Growing Healthy Kids with Food Straight from the Soil, she discusses how the national obsession with over-sanitization – of kids’ bodies, their homes, even the soil that grows their food – does far more harm than good (see box).

“Portland is a community that is very open to these ideas,” says the pediatric neurologist and urban farmer who came to Portland in March to deliver a keynote address at the Nutritional Therapy Association’s eighth annual conference. Already a well-known international lecturer, since her book came out she has been in high demand as a speaker. The following week she was in Denver participating in the Nutrition and Health Conference, where she spoke about a paper published in Nature about soil biodiversity and human health.

Her book presents two principles for parents: buy and cook the healthiest natural foods; and encourage children to play in nature. Both practices expose children to the health benefits of life-sustaining microbes and nutrients found in fertile soil.

“The main point of my book is to understand the health of our bodies – our inner terrain – is a reflection of our outer terrain – the world around us,” she says.

She also discusses the “old friends” theory she studied at the University of Arizona, where she completed a two-year fellowship in integrative medicine and is now a member of the faculty. The theory postulates that the presence of micro-organisms and parasites present throughout human evolution “taught” the immune system tolerance so it did not overreact to every foreign body. Numerous studies have tied the rise of autoimmune and allergic conditions to decreased exposure to microbes.

“There has been some refining that improves the old friends theory,” she says. “For instance, we know bacteria can be helpful. Now we know it’s not just the amount of bacteria, but also the diversity of bacteria.”

One practice she promotes in both her book and talks is “forest bathing,” which improves emotional health as well as increasing contact with varied bacteria and other microbes. “Spending quiet time in the forest” has many benefits, she says. “It makes people calmer, sleep better, have lower cortisol levels (a marker of stress), lower inflammation markers and higher anti-cancer proteins in the blood.”

Additionally, she believes that children benefit from having pets or contact with animals.

“Data show that young children exposed to pets in the early years are less likely to develop allergies of all kinds later in life,” she says.

Dr. Shetreat-Klein says the connection between humans and the natural world fits in well with Jewish teachings. She is a member of the Hebrew Institute of Riverdale, an open Orthodox congregation.

“The Jewish people believe strongly in the idea of tikkun olam, healing the world, and pikuach nefesh, saving a life,” she says. “Those two concepts together embody the philosophy I am speaking about – one deeply connected to the health of the world around us. And that we … are charged as custodians.”

Dr. Shetreat-Klein is an integrative pediatric neurologist with a medical degree from Albert Einstein College of Medicine, where she was awarded the Edward Padow Award for Excellence in Pediatrics and graduated with a special distinction in research in child neurology for her original work on autism. She teaches integrative neurology at Albert Einstein College of Medicine, New York Medical College, and the University of Medicine and Dentistry of New Jersey.

Children are part of a growing and massive health crisis in which chronic illness has become the new normal. The culprit? Our national obsession with over-sanitization.

In The Dirt Cure, Dr. Maya Shetreat-Klein proves that it’s possible to reverse this trend by allowing our children exposure to microbes, feeding them fresh food from healthy soil and encouraging time in close contact with nature.

Based on cutting-edge medicine that she has pioneered, The Dirt Cure empowers parents to transform their children’s health by understanding the profound connection of their bodies and minds to nature and to food from nutrient- and microbe-rich soil. In a book that Dr. Mark Hyman calls “game-changing” and Dr. Andrew Weil says will turn “the prevailing paradigm on its head,” integrative pediatric neurologist and mother of three, Dr. Shetreat-Klein, shows parents how to keep their kids healthy based on two essential principles:  First, heal them from the inside out (buy and cook the healthiest natural foods); and second, heal them from the outside in (playing in nature). Both of these practices expose children to the health benefits of the rich repository of life-sustaining microbes and nutrients found in fertile soil.