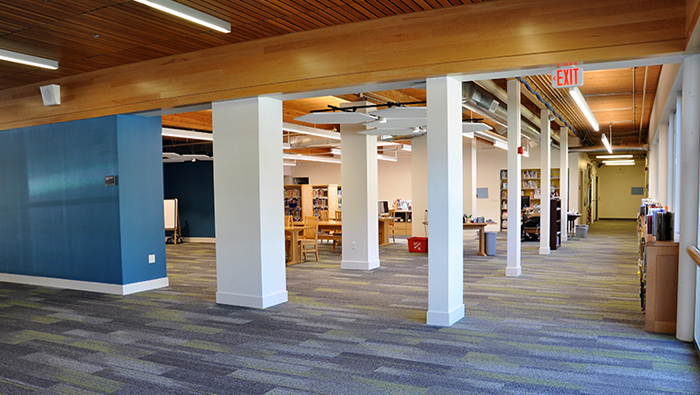 The open vista that greets students and visitors entering Portland Jewish Academy is now the physical manifestation of the open, collaborative learning environment that has long been a hallmark of the Jewish day school.

PJA has renovated the lobby, removed walls between hallways and the library, and reorganized the open space and adjacent rooms to create a Learning Commons, which integrates traditional library and technology resources.

“The concept started in colleges,” says PJA Executive Director Steve Albert. “The traditional library has evolved into a learning commons that supports technology, collaboration and project-based learning in flexible space.”

When the Min Zidell Education Wing was added to the Mittleman Jewish Community Center in 1987, it featured traditional classrooms and hallways.

“Now they have the creative space to support the learning that was already happening.” says Steve, adding that the Learning Commons provides the space for students to gather and collaborate more efficiently.

Although the school adopted the concept to give students the space and resources to pursue the project-based learning the school has long used, it has become so much more.

At any given time, the Learning Commons may be populated with middle schoolers collaborating on a project, preschoolers listening to a story, teachers planning projects and parents consulting the librarian about good books for their children. Acoustic panels on walls and below the ceiling confine the noise from the diverse activities, enabling comfortable multiuse.

“It will promote independence and reinforce our student-centered philosophy,” says Merrill. “We’ve seen students who learn in different ways access different kinds of spaces in which to do their learning. The old traditional system is not compatible to everybody. We need to give kids different ways of being together. And we’ve seen it happening.”

Steve says they also plan to leverage the space to expand community building beyond the school. He’s already talked to groups such as BBYO and the Institute for Judaic Studies about ways they might use the space. Additionally, PJA will showcase the space at the annual auction in December. While the dinner and live auction will still be in the MJCC Auditorium, the social hour and silent auction will be in the Learning Commons.

“I think it has a lot of potential for communal use,” says Merrill, noting it is ideal for various programs, teaching and social gatherings.

As part of the renovation, many bookshelves were relocated from the center of the library space to along the walls, with the Judaic collection moved into the Beit Midrash (“house of learning”). The former Beit Knesset (“house of assembly”) still contains the ark and Torah scrolls. The renovation also added a full kitchen in the existing Project Room, repurposed the Collab Lab as a dedicated Music Room, constructed a new library workroom and two new student conference rooms, and built a private student lavatory.

While many members of the community contributed funds for the renovation, three donations are recognized with plaques in the new space. Lee and Becky Holzman made a donation in honor of long-time PJA teacher Dina Feuer, now retired. Jason Zidell and Family dedicated the Story Corner in honor of Jay Zidell. In recognition of the importance Hilde Jacob, z”l, placed on education, the estate of Hilde and Heinz Jacob contributed funds to the project. Their grandson, Mark Eiseman, attended PJA through elementary and middle school.

“Education was very important to her,” says Hilde’s daughter Becky. “She left Germany during the war, where education was taken away from her.”

After Jewish students were pushed out of regular school, Hilde attended a Jewish day school and felt truly at home, says Becky. When she came to the states, she was put into a girls’ school where she was not able to take science. Despite her limited English, she demanded to go to a school where she could study science. She attended Portland’s Washington High School, graduating with honor, before enrolling in Reed College. When she ran out of money for tuition at the private college, she hitchhiked to Eugene, where she graduated from the University of Oregon. She taught preschool at Congregation Neveh Shalom’s Foundation School and then spent three decades as the congregation’s librarian.