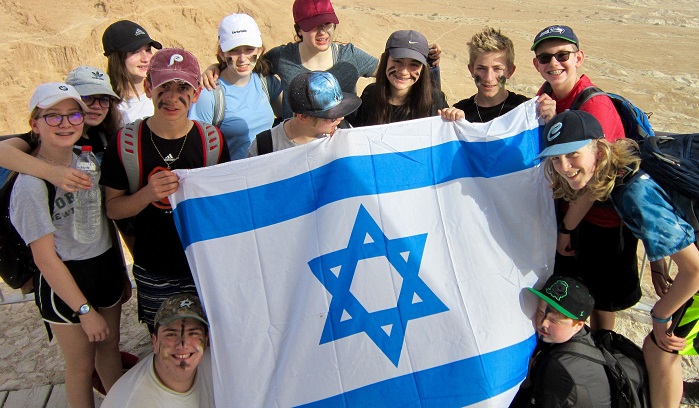 PHOTO: Portland Jewish Academy eighth-graders on top of Masada during their class trip to Israel in March.

Portland Jewish Academy began taking its eighth-graders to Israel when the day school expanded to eighth grade for the 1997/98 school year. Since then, except for three years during and after the Second Intifada, members of all of PJA’s graduating classes have been able to experience the land they had learned so much about.

This year 13 PJA eighth-graders experienced the sights, sounds and flavors of Israel March 12-27 on a trip with two other Jewish day schools. The students explored the country from Mount Hermon in the North to Sde Boker, a kibbutz in the southern Negev desert where David Ben Gurion is buried.

“We met with many different people from different cultures and religions, which is what makes Israel special,” says PJA trip coordinator Shahar Eden. “We met with sixth-grade students in their school in Ashdod, we rode camels and listened to a Bedouin talk about their nomadic lifestyle. We walked around Ussefiya and had lunch with the Druze community of the village. We danced and sampled Ethiopian food in Gedera, and had a conversation with local Muslim women in the village of Ein Rafa near Jerusalem while visiting their mosque.”

Born in Israel, Shahar moved to the United States when he was 23. He has been teaching at PJA for seven years and has led the Israel trip for four years.

“The trip allows the eighth-grade students to explore places they have been learning about for many years as students at PJA,” says Shahar. “It gives them the opportunity to visit sites that they only saw in pictures, to talk to Israeli students their age, to taste food that they have only sampled in Portland – sorry, Israel has better falafel – and to experience firsthand the complexity of the Jewish and modern State of Israel as they travel through that magical place.”

Some of the trip highlights included floating in the Dead Sea after hiking up Masada, spending Shabbat in Jerusalem, visiting the Kotel, partying on a disco boat on the Sea of Galilee and meeting Israeli middle school students.

PJA student Brianne Sass was especially moved by the visit to Yad Vashem, Israel’s Holocaust memorial, which she says helped her understand what people went through during the Holocaust. “The most incredible part of Yad Vashem is how it made me feel,” says Brianne. “After walking through the winding path to get to the light at the end of the triangular tunnel, I could really feel the weight of all of the history. I started to miss all of the people that perished in the Holocaust like they are a missing part of my family.”

She says Yad Vashem’s children’s memorial was especially powerful: “In the first room you can see many pictures of different children, and you feel sad that these innocent children have died. The second room was really powerful. You can see millions of lights flickering in the pitch black room. Only then did I truly understand the numbers of how many children were killed.”

Eighth-grader Bella Philips has dreamed of going to Israel since she was in second grade.

“As soon as I took a step off of the plane, I knew Israel was special,” says Bella. “It had this vibe that made me so happy. … everywhere we went, there was a new thing that just made the trip a little bit better. We went everywhere! The Dead Sea, Masada, Kotel, Ben Yehuda Street, the markets and even the small juice stores!”

For Lev Barnett, the class trip was a return. Lev and his family lived in Israel for six months when he was in fourth grade. At that time, studying in a Hebrew-speaking school was tough, but after he left Lev says “I found myself wishing I could go back. Then when I joined PJA, I actually could.”

In the company of his school friends, Israel was even better than he remembered. “The activities ranged from a graffiti tour in Tel Aviv where we got another view of Israeli culture to a peaceful bike ride in the Hula (Valley),” says Lev. “I loved it.”

For all the students, Israel is now a real place with tastes and textures etched in their memories.