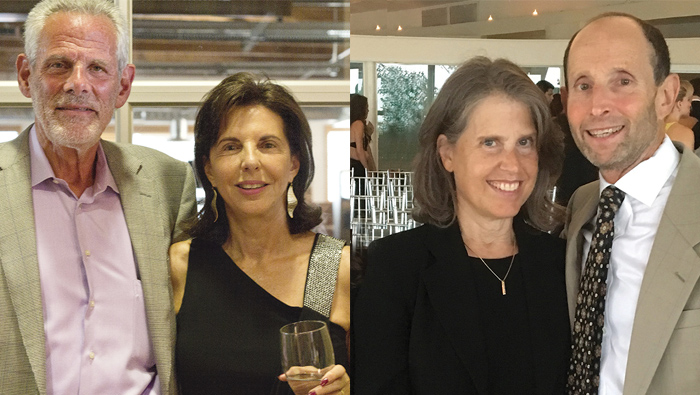 For two Portland philanthropic couples, the Portland Jewish Academy’s annual auction in December is a time to come together and invest in Jewish education. Jay and Diane Zidell and Steve “Rosy” Rosenberg and Ellen Lippman say they view Jewish education as vital for the future of Jewish people.

Both couples have matched Mitzvah Moment donations at the annual auction for the past few years. When they upped their commitment three years ago to match sponsorships, as well, sponsorship levels rose and have done so each year since.

Sponsorships, ranging from $360 to $10,800, come from individuals and businesses that support PJA. Last year sponsorships totaled approximately $75,000. Each year during the auction, everyone in attendance gets to raise their number to support the school during the Mitzvah Moment. Attendees can “bid” to donate at levels ranging from $36 to $25,000. Last year’s Mitzvah Moment gifts totaled about $125,000. With the double matches from the two couples, the school reaped nearly $375,000 from the Mitzvah Moment and $225,000 from sponsorships. In total, last year’s auction raised more than $620,000, including revenue from the auction itself.

“PJA is at the top of our list as far as charitable giving,” Jay says. “Both my wife and I have concerns about some of the trends we see within the Portland Jewish community and in order to stem some of those trends we see, we think it’s critically important that we capture our youth as early as possible and give them the opportunity to have a high-quality education. This means both secular and Jewish education, and hopefully that will keep them inside the tent for a longer period of time.”

This year, for the first time, a Zidell family member, the couple’s granddaughter, is at the school. She is in kindergarten. “We’ve always been dedicated to supporting PJA, but I am delighted to see my granddaughter attending,” Diane says.

Jay believes the social environment at PJA significantly impacts a child’s Jewish identity. Students who attend are able to grow up with other kids who have similar interests, and that “ultimately strengthens the Jewish fabric of the community,” Jay says.

Jay and Diane say in recent years they have increased their support in other Jewish agencies and activities that are primarily youth or young adult focused, including B’nai B’rith Camp, Hillel and Moishe House. The couple believes that investing in youth is essential to ensure a strong future for the Jewish people and the Portland community.

“It really empowers people to feel good about the gift they are giving, no matter the size,” Rosy says. He hopes it motivates others to be charitable, as well.

“Our donations are allowing kids to go to school who otherwise couldn’t,” Rosy says. “One of the great things about the school is that over half of the kids have some sort of financial assistance.”

Rosy and Ellen’s twin daughters, Mara and Ilyana, attended the school through elementary and middle school. They credit PJA for giving their girls the best education possible and believe an all-encompassing, all-day Jewish education is the best way to immerse kids in Jewish learning.

Rosy and Ellen say they have been involved with the Mittleman Jewish Community Center and PJA since they moved to Portland, but didn’t begin to provide financial support until their girls started school.

The Zidell family, however, always has. In fact, the Min Zidell Education Wing is named in honor of Jay’s mother.

“They supported the school when my girls were enrolled, and now that his granddaughter is, I feel it’s important to support his family,” Rosy says.

Rosy and Ellen see giving to PJA as an investment in the future. “Everything else we give to is current or the past. Children are the future and the most important,” Rosy says.

“PJA provides a powerful connection in a concentrated way,” Rosy says. “I believe it’s hard to find meaningful connections in the Jewish world without a Jewish education.”

Steve Albert, the Execute Director at the JCC and PJA, says the support from the donations is critical to the school on many levels.

“Their support of PJA’s operations allows us to offer a tremendous amount of need-based financial aid, which allows us to better serve the community. In addition, these funds support faculty professional development, the development and implementation of our new interdisciplinary Makerspace, field trips and special programs.”

Steve says their generosity inspires others and helps build a culture of philanthropy. “We are tremendously grateful for their support.”

WHEN: 4:30 pm • Dec. 11
WHERE: Mittleman Jewish Community Center, 6651 SW
Capitol Hwy., Portland
WHY: Founded in 1961 as Hillel Academy, the first class had
26 students in grades 3-6. Now, 55 years later, we have over
325 children enrolled in our infant toddler program, preschool,
lower school and middle school. As we educate more of our
community’s children, the auction’s impact becomes even
greater. Over half of PJA students receive some scholarship
support, which reflects our diverse student body.
TICKETS/INFO: $75 until Dec. 1 at pjaproud.org/auction