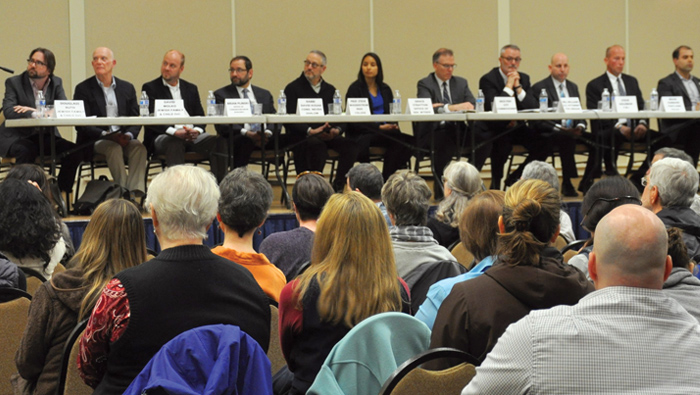 More than 200 people turned out for an April 4 town hall meeting on dealing with the increase in hate crimes. The gathering was held at the Mittleman Jewish Community Center, one of more than 100 JCCs and other Jewish organizations that received bomb threats, all of which were hoaxes. Though an American-Israeli teen was arrested on suspicion of making the threats a few days before the gathering, concern over the climate of hate in the country remained high.

The 11-member panel included government, law enforcement, academic, religious and social service representatives. MJCC Executive Director Steve Albert noted that the gender imbalance of the panel (only one woman participated) was not intentional.

Sen. Merkley was on the Senate floor in the midst of a 15-hour filibuster protesting President Trump’s nominee for the Supreme Court. In the statement he sent the town hall, Sen. Merkley said, “I am shocked, saddened and disgusted by the surge in hate crimes that has swept the nation. … This is intolerable. This is not who we are as Americans. … For centuries, America has been a beacon for the oppressed and downtrodden around the world, no matter their faith or country of origin.”

Sen. Wyden’s statement noted, “I am committed to working with all of you to root out this virus of hate that is poisoning our country. As the child of Jewish immigrants who fled Nazi Germany in the 1930s, I stand solidly with you now and always in pushing back against all signs of hatred.”

Rep. Bonamici’s letter said, “Words have consequences and we must all be cognizant of what we say and how it is received. Insensitive or incendiary remarks on social media or elsewhere in the public domain can be misconstrued and inflame prejudiced viewpoints.”

Portland Police Officer Brian Hubbard noted, “Social media plays into this frenzy. It gives everybody a voice and they feed off of each other.”

FBI agent Steve Goldman assured the crowd that “Hate crimes are a priority for the FBI.”

Portland City Commissioner Nick Fish said, “There is a white nationalist in the White House, and he is advising my president.” Fish added that Portland is joining lawsuits filed by other cities in defense of its stand as a Sanctuary City.

Professor Steven Wasserstrom put the situation in historical perspective. “In the 1990s there was an uptick in the extreme right wing. It seemed to go away after 9/11. … Groups have come out of the woodwork after the election.”

Two counselors from Jewish Family & Child Service spoke on how people can cope with the stress related to hate crimes and how they can help their children cope. David Molko suggested people focus on balance. “Recognize these are incidents and we can carry on with our lives.”

Rabbi David Kosak also addressed ways to react on both a communal and spiritual level. On the communal front, he encouraged people to pursue both friendship and activism to maintain resilience. He urged people to “form relationships around difference.”