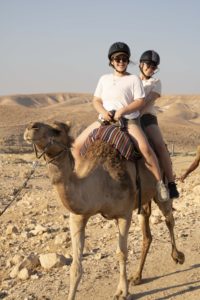 A group of students from Oregon came to Israel on a Birthright trip and along the way they discovered a side of Israel they hadn’t expected.

When 40 or so students from the United States came to Israel on a Birthright trip with Israel Outdoors in July they received an unexpected extra – some ISRAEL21c programming.

The students, mostly from either Oregon State University or the University of Oregon, arrived in Israel on June 27 and left on July 9. One of the co-staffers running the trip was Rachel Poulin, ISRAEL21c’s Outreach and Engagement Coordinator.

Every day, Poulin integrated ISRAEL21c articles and videos into the day’s events for the trip, introducing the kids to content related to the experiences they were having that day.

On the way to the Dead Sea, for example, the students read the article 9 eerie and stunning photos of the disappearing Dead Sea. In Tel Aviv, the article of the day was 10 top reasons to visit Tel Aviv in 2019. While at Mount Herzl, it was Finding the story buried under every soldier’s gravestone.

“The idea was to provide additional educational content and context on every day of the trip in an effort to enhance the already amazing Birthright experience,” said Poulin. “At the end of every day, we had an evening ritual of discussing our highlights of the day while also discussing the article of the day.”

On the last day of the trip, ISRAEL21c Editor Nicky Blackburn hosted the students at a special event in Jaffa with other ISRAEL21c staff, including Abigail Klein Leichman, to provide more insight into the nonprofit organization.

“It was wonderful to meet the students and to hear their impressions of Israel,” said Blackburn. “I was excited to see how much they had learned, not just about the history of Israel, but also about contemporary Israel and how the country is at the forefront of so much innovation and cultural change. It was clearly a meaningful experience for them and helped change their perspective on Israel.” 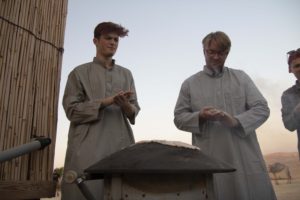 “Before this I was really invested in Israel, but I was mostly focused on politics and the conflict,” said Jasmin Lewin, a student at the University of Oregon. “But there’s a lot more. There’s art, culture, religion, history … and I didn’t see any of that before I got to come here.”

Thomas Tandberg, from the same university, agreed. Reading ISRAEL21c “really humanizes the region and the country,” he said. “It’s not just conflict; it’s real human people behind all of this.”

During the trip, ISRAEL21c also ran a photo/video contest aimed at capturing the essence of 21st century Israel. Winners, all from the University of Oregon, were Natasha Astrakhan for her photo at the Dead Sea, and Tal Hit and Niv Cohen for their videos.

Poulin, who co-staffed the trip with Oregon Hillel’s Innovation Director, Loren Murphy, said: “Integrating ISRAEL21c content into the Birthright trip curriculum opened participants’ eyes to an entirely new lens of Israel, allowing them to connect to the place in even deeper levels and contexts. They responded very well to the content.

“I am excited for participants to go home and continue using ISRAEL21c as a resource, as well as share it with their online communities and beyond,” she added.

Three of the Birthright participants from the trip will be joining the ISRAEL21c Digital Ambassador program next year. To learn more about the program, or to join, click here.

You can enjoy the winning photo and some of the other excellent photographs entered in the photo competition as part of the article on Israel21c here.

'Oregon Hillel students experience Birthright with Israel21c' has no comments