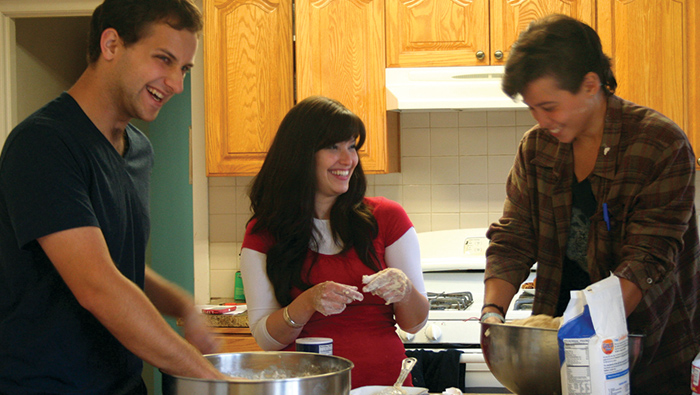 Robby Gottesman, a senior in physics at Reed College, sits in SE Chabad House’s front room across from Rebbetzin Chani Bialo. His first time at Chabad was just two weeks ago when a friend brought him along for Shabbat dinner. Now, he is ready to make challah, something he always wanted to learn.

“We were pretty secular,” he says about his upbringing in Los Angeles. “We went to synagogue for the High Holidays, but we weren’t into the whole Jewish culture.” Soon, at Chani’s request, he puts on a kippah, walks into the kitchen, ritually washes his hands and gets out a 5-pound bag of flour.

Robby’s entree to Chabad is not unusual and may impact his future attachment to Judaism according to a recent study about Chabad-Lubavitch on college campuses. Commissioned by the Hertog Foundation, an educational philanthropy, the study found interaction often begins with a friendly, fun Shabbat or holiday meal. Personal connection with the rabbi or rebbetzin deepens the involvement and can have a lasting effect on students, including religious beliefs and practices, Jewish community involvement, Jewish learning, dating and marriage, attachment to Israel and donating to Jewish causes. Chabad, the study found, has its greatest impact on students from less religiously observant backgrounds. Those raised Reform who were active with Chabad had a 113% increase in their overall engagement compared to their counterparts who hadn’t been active with Chabad during college. For students raised with “no denomination,” Jewish engagement was 107% higher.

The study noted an “extraordinary level of concern” shown by the emissaries toward each student along with acceptance of all levels of religious observance. While the rabbi and rebbetzin are scrupulous in their personal observance, they do not consider those who don’t follow these practices to be any less Jewish than they are. In 2000 Chabad had 30 student centers on U.S. campuses; today, there are 198. Each Chabad center is self-supporting, does its own fundraising and depends on individual charitable donations.

Southeast Chabad in Portland consists of two back-to-back ranch houses directly across from Reed College. Rabbi Dov and Rebbetzin Chani Bialo live in one house with their seven children and use the other for the community. On this day, the communal kitchen buzzes with challah making for Shabbat, for the upcoming Rosh Hashanah holiday and for their “Loaves of Love” project where they give challah away each week. Chani says the bread is made with love; they use their hands, never a mixer. Besides, no home electric mixer is large enough to handle 20-something loaves of challah.

Other students arrive, wash their hands and get going. Students check for blood spots as they add eggs after Chani explains blood is not kosher. Emma Chomsky, a Reed freshman, met Chani and Rabbi Dov at school. “They were talking to people and very friendly,” she says. “I am Jewish, not practicing but …” Emma was born in Nicaragua, grew up in Mexico City and plans to major in environmental studies or biology.
“What do you do besides Chabad?” Robby asks.

“That’s it,” Chani says. “That’s our passion. We grew up knowing we wanted to open a Chabad House, a place where people can have a home away from home. We devote our life to Chabad because we love it, and we love you guys. We have no other agenda.”

With the challah put aside to rise, it’s time for making cards. The Loaves of Love project involves collecting names of students and neighbors who would like a challah and passing them out along with a handmade greeting card. Everyone sits at a long table in the living room and selects colored cardstock, crayons and pens.

Liat Kastner has graduated from Reed but was back at Chabad for a visit. When she heard Liat had just been to the dentist, Chani warmed up a cup of hot soup.

“I’ve learned a lot about my Jewish identity,” Liat says about her college experience with Chabad. They’ve been wonderful, so open-hearted and open-minded.  I never had a close friend as observant as Chani. Chani never says, ‘This is what you’re supposed to do.’ She says, ‘This is my perspective, how I see the world. Some people do this and some don’t.’ ”

Sophomore Miriam Bern also talks about Chabad as she draws: “They are the most welcoming family.” she says. “No matter what I’m going through, they’re here for me and have given me so many tools. They’ve made me a more positive person, and I’m grateful for that. I don’t know where I’d be without them.”

The University of Oregon in Eugene also has a Chabad House, in fact it was one of the early campus Chabads.

Chabad at U of O was established about 15 years ago by Rabbi Asi Spiegel and his family. After the Spiegel family made Aliyah to Israel, Rabbi Berel and Rivky Gurevitch arrived to take over the center.

“We’ve been in some sort of contact with anywhere between 200 and 250 students,” says Rabbi Gurevitch of the couple’s first year in Eugene. “Besides weekly Shabbat dinners and weekly classes, we also host both religious and social programs during the week. For example, we have  kosher BLTs – bagels, lox and tefillin, Girls’ Night Out, Jewish movie nights and holiday programs.”

In a recent phone interview, Rebbetzin Rivky Gurevitch said, “I’ve had close relationships with most of the girls. I’m even in touch with one of the student’s mothers.”

“Judaism is not the main focus of our conversations,” says the rebbetzin. “It’s more like relationships, life on campus, family and the best nail salons around. Some students are Reform or Conservative, but most are unaffiliated or don’t even know they’re Jewish. They say their mom’s mom is Jewish.

“On Friday nights, we always have matzo balls and chicken soup. The first course is a huge array of salads followed by chicken with vegetables on the side. We’ve had chocolate lovers Shabbat, Italian, Mexican and Middle Eastern. We have Girls’ Night Out. Once, a bunch of girls came over for a makeup course. We do social events like sushi making or movie night, and we also have classes. Last year we had Pizza and Parshah where we talked about the weekly portion of the Torah.

Linda Guilan is a junior at the University of Oregon. “I was raised away from the Jewish community and being back in touch is great,” she said in a phone interview. “Chabad is welcoming and loving to all of the students. It’s truly been my home away from home.

There’s always something going on at Chabad.

“Rivky has a Rosh Hodesh event every month, says Linda. “They’re fun, and it’s empowering to see how valued women are in the Jewish community. During finals week when we’re up all night studying, Chabad has a midnight breakfast. We have a support system at every turn.”

For more information on the Hertog study visit bjpa.org and type “Hertog” in the top right search box. For information about Chabad in Oregon, visit chabadoregon.com.