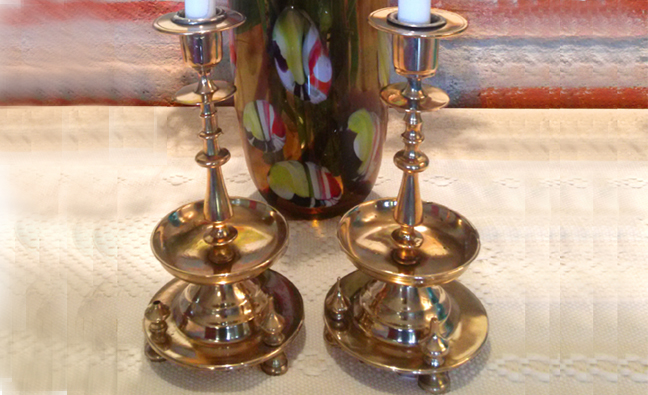 I entered the classroom of 32 seventh graders at the worst time imaginable – seventh period on a Friday afternoon, the weekend before winter break. I knew the deck was stacked against me. I had been warned by the very enthusiastic teacher who asked me to read my short story as part of her unit on ethnic literature that this class was a “rowdy” group.

I came prepared with two grocery bags, one filled with boxes of donuts and soda and the other with my copy of Chicken Soup for the Jewish Soul and my grandmother’s candlesticks. I knew one thing for certain: even if the students didn’t understand my story, they would appreciate the Jewish tradition that learning should be a sweet experience.  Munching on donuts while listening to me read would capture their stomachs, if not their hearts.

I scanned the overcrowded classroom: typical adolescents sporting pimples, nose rings, hair gel and Attitude. When the teacher introduced me as the local author who wrote a short story called “Grandmother’s Candlesticks,” eyes rolled, chairs tilted back and notebooks opened in preparation for some serious doodling.

I would have given anything for my grandmother to be able to see what transpired in the classroom that day. For during a period of less than an hour, a multicultural group of boisterous teens came together in a rare moment of understanding, compassion and kinship.

How did the story about a pair of brass candlesticks secretly brought over from Russia in the lining of a coat capture the minds and hearts of children who had never heard of a pogrom or of the Jewish Sabbath? Why did the image of my aging grandmother struggling to remain central in the lives of her children touch their imaginations and their souls? And who would have imagined that as I read about my grandmother handing me the candlesticks with her blessing before she died, students would break down sobbing, remembering their own grandmothers, aunts, uncles and parents who had died too soon, leaving them with too little.

When I finished reading, I passed the heavy brass candlesticks, covered in years of wax, up and down the rows of students. They seemed to feel the weight of tradition in their hands as they gently handed the candlesticks to one another. I asked if anyone wanted to share their feelings or ask me questions about what I wrote.

At first no one spoke. Then a pale-looking girl stood and walked to the front of the room, sniffling and wiping her nose with the back of her sleeve. She asked if she could read a poem she had written for her father, who had died in the hospital less than three months before. She had been carrying it around with her since he died, but had never read it to anyone. In a child’s whisper, she spoke directly to her father in couplet form, without hesitation or fear. As she walked back to her seat, friends crowded around her hugging her small frame, handing her a Kleenex, offering her support.

Then a tough-looking young man who had scribbled throughout my reading stood up and told his story. He didn’t have a grandmother or a grandfather, he said, or even a mother. They had all been killed by a drunk driver when he was 4. He wished he had something like the brass candlesticks, something they had shared together with old wax or fingerprints on it, because it was like having a piece of them with you forever.

As child after child told of a “tia,” “abuela” or “nana” with whom they had lived, loved and lost, the classroom became a sanctuary for years of unspoken grief. The bell rang, but no one wanted to leave.

I gathered my things, hugged a few of the students and said goodbye. I had almost reached my car when I heard someone call my name.

Turning toward the voice, I stared into the face of Celeste, one of the students in the class who hadn’t said a word.

“Would you please talk to my father?” she implored. “I really want to go to Phoenix … to the cemetery to see my grandpa … he died a while ago. I can’t get there by myself. I have to go, but he won’t take me.”

Her words came out like choked staccato notes: short, sharp and pointed.
“Well, honey, I could call him if you want but …”

“You don’t have to,” she interrupted, “he’s sitting right over there in that pickup truck.”

I slowly turned my head and saw a very big truck across the parking lot. I walked toward it and awkwardly looked into the face of a man I had never met and told him how much it would mean to his daughter if she could visit her grandfather’s grave to have the chance to tell him what was on her mind and in her heart.

He grunted, said he’d think about it and revved the engine, which was my signal that the conversation had ended. I felt bad, thinking that I hadn’t helped the situation much and that Celeste would never have the closure she so desperately needed with her grandfather.

Weeks later I received a letter on notebook paper from Celeste. Tears filled my eyes when I read her words. Her father had taken her to Phoenix to visit her grandfather. She was lucky, she said, because now she could visit him whenever they went there. She had written me the letter so that I would have something permanent to keep by which to remember her. Not as nice as those candlesticks, she wrote, but something special just the same.

Amy Hirshberg Lederman has written more than 300 columns and essays that have been published nationwide. amyhirshberglederman.com