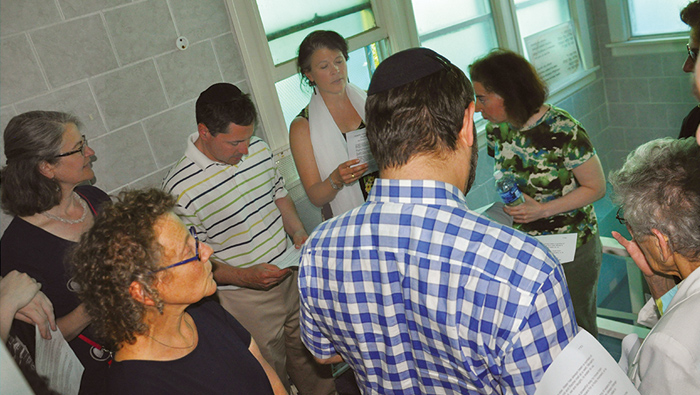 “From strength to strength, from mikvah to mikvah,” said Rabbi Ariel Stone at the July 24 desanctification ceremony to close the Portland Ritualarium (aka Portland Community Mikvah), which has served the full spectrum of the Jewish community since 1962.

The Jewish Federation of Greater Portland, in partnership with the Oregon Board of Rabbis and others, is building a new community mikvah using the proceeds from the sale of the house that contained the ritualarium. Federation President and CEO Marc Blattner explained that the confluence of Portland’s hot real estate market and the escalating maintenance needs of the mikvah made this an excellent time for the transition.

“A Jewish community is required to have a mikvah,” explains Blattner. “Portland is blessed to have had two mikvaot. The old Jewish Ritualarium of Portland, however, was falling into disrepair, and the Jewish Federation, in partnership with the Oregon Board of Rabbis and other community leaders, realized the need to build a new mikvah that will be open and accessible to everyone in the Jewish community. This is an exciting opportunity for Jewish Portland.”

The new mikvah will be located on the Schnitzer Family Campus, which is in the heart of Portland’s Jewish community’s main population center.

Blattner and Rabbi Stone both say they expect greater mikvah usage and learning to take place in the new location with a modern, open feel.

Rabbi Stone said the Board of Rabbis hopes to sponsor various opportunities for learning and to be available for teaching about mikvah. She noted other mikvah professionals and attendants will also be good resources for the community.

The new mikvah is expected to be ready for use  by early 2017.

“After today, this place that has been so important to our community for so long, is no longer sacred,” said Rabbi Stone at the desanctification ritual.

Rabbi Joshua Stampfer had planned to present a history of the community mikvah, which opened nine years after his arrival in Portland. But in the face of the day’s heat, the nonagenarian felt unable to appear, and Rabbi Stone provided a brief history (see box for historic overview).

For the second immersion into community, Rabbi Stone spoke of the people who have lived in the home and served as caretakers of the mikvah.

The ceremony’s third immersion explored the spiritual meaning of water in Jewish tradition. “Miriam had a well that followed her around,” said Rabbi Stone. She described crossing the sea from slavery to freedom as “our people’s first mikvah.” Immersion in the mikvah is about transitioning from one state to another, she explained.

The new mikvah, like the ritualarium, will be used across the Jewish spectrum, she said.
“Very few mikvaot in the U.S. are truly community mikvaot,” she said in an interview before the groundbreaking for the new mikvah. “A mikvah can’t be made unkosher if someone who you disagree with religiously goes into it, and the rabbis of this community have figured that out and are willing to live by that. I’ve very proud of this group of rabbis.”

At the time of this writing, groundbreaking was predicted to occur in mid-to-late August.
“To break ground on a sacred space right after Tisha B’Av is a nice coincidence,” said Rabbi Stone. Tisha B’av is a fast day that commemorates the destruction of the First and Second Temples, and to begin to create a new space for Jewish life just after such a somber day is very meaningful, she added.

A campaign to fully fund the new mikvah’s construction and provide funding for its upkeep and operation was also launched in August. Portlander Ronnie Malka is leading the fundraising effort. Ronnie worked with Caron Rothstein, who is the JFGP coordinator for the project, to develop an online resource for the project: jewishportland.org/ourcommunity/portland-community-mikvah. This link displays videos from four members of the community who have used a mikvah in meaningful ways, shows images of the architectural plans and explains details of the giving tiers for the campaign.

On Aug. 2 Ronnie’s sister-in-law, Naomi Malka, the director of the Adas Israel Community Mikvah in Washington, D.C., was in Portland to help launch the campaign. At an evening program she spoke about the creative ways women and men can use the mikvah to mark a variety of life transitions.

A local option for women is Mikvah Shoshana, which opened in 1998 to promote Taharat Hamishpacha, family purity – where women immerse in order to reenter the holy, loving, mindful intimacy and mitzvah of the marital relationship. For information or an appointment call 503-309-4185.

The Harrison Street mikvah was at least the third community mikvah in Portland.  According to several sources, a mikvah organization was incorporated about 1902 to serve immigrants in the South Portland neighborhood. There are no mentions in news stories or other sources of an earlier mikvah, though there may have been one.

A 1975 story in The Jewish Review, a longtime Jewish community newspaper, notes that a mikvah was established in the Duniway Park area in the South Portland neighborhood about 1902. It was later relocated to Southwest Third Avenue and Lincoln Street, where it fell victim to the urban renewal clearance project that claimed more than 50 blocks in the Jewish and Italian immigrant neighborhoods.

The late Lydia Brown, who had been president of the mikvah organization for more than 20 years, said she, her husband, Barry Brown, and other families found a house across the street from their home, and the new mikvah opened in February 1961.

“It took a lot of legal procedures,” she recalled in a letter about the mikvah’s history. “We had to get permission from the neighbors, because it was considered a public utility.”

She noted that Ruben Cohen, who served multiple terms as president of Congregation Shaarie Torah in the 1940s and 1950s, helped raise money for the mikvah. “Mr. Cohen used to tell (potential donors) that if there is a choice in a community to build a shul or a mikvah, the mikvah is more important.”

Julius and Ilona Aigner, Holocaust survivors who had come to Portland from Hungary, were the first couple to serve as the “new” mikvah’s live-in caretakers “They took great pride in their position, especially since they were both Holocaust survivors and saw our traditions being continued,” said their son, Leslie Aigner.

In about 1980, Lilian and Joseph Corcos took over as the mikvah staff, serving in that position until their retirement in 2014, when they moved to be closer to family.