Tel Aviv — A new Tel Aviv University study finds that microplastics — tiny pieces of plastic ingested by aquatic life — are present in solitary ascidians all along the Israeli coastline. Ascidians are sac-like marine invertebrate filter feeders. The research also confirmed the presence of plastic additives, i.e. “plasticizers,” in ascidians. Plasticizers are substances added to plastics to increase their flexibility, transparency, durability and longevity.

The research was led by Professor Noa Shenkar of the School of Zoology at TAU’s Faculty of Life Sciences and The Steinhardt Museum of Natural History and published in the January 2019 issue of Marine Pollution Bulletin. The study was conducted in collaboration with Professor Dror Avisar, head of the Water Research Center at TAU’s Faculty of Exact Sciences; and Aviv Kaplan, a postgraduate student in Professor Avisar’s TAU laboratory. 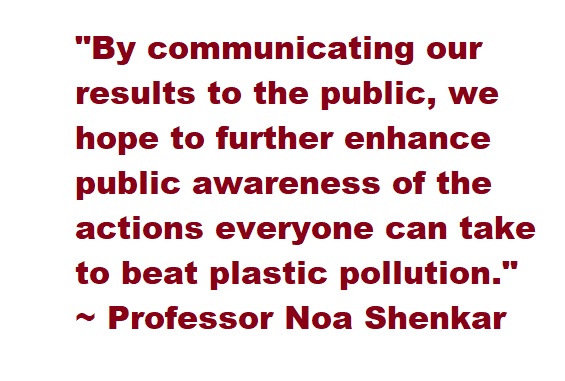 “This is the first study that examines plastic additive contamination in marine organisms in the Eastern Mediterranean and Red Sea,” says Gal Vered, co-author of the study and a PhD student in Professor Shenkar’s laboratory at TAU. “Solitary ascidians are highly efficient filter feeders and are excellent examples of the state of pollution that affects many other marine organisms. Our findings are extremely disturbing. Even in protected beaches, there was evidence of microplastics and plastic additives in ascidians. In fact, at every sampling site, we discovered varying levels of these pollutants.”

“This is a direct result of human use of plastic,” Professor Shenkar says. “It may seem that plastic bags and bulky plastic products that we notice floating in the sea are the major problem. But a more important cause for concern is the fragmentation of these products into small particles that are then ingested by many organisms and reach even the deepest zones in the ocean.”

The researchers developed a novel method for testing for additives in marine life. “Our new chemical analysis method can be used on a variety of soft-tissue marine organisms,” Professor Shenkar continues. “We can now extract phthalates, an additive that’s used primarily to soften polyvinyl chloride, from organism tissues without contracting any background contamination from the laboratory equipment itself, which also has plastic components. This was a big challenge because the laboratory is actually a highly plastic ‘contaminated’ environment.”

Some 350 million tons of plastic are produced worldwide every year, and the number is rising. The research suggests that if plastic is found in ascidians, it is probably present in other sea creatures.

The researchers are currently preparing their results for policymakers interested in preventing further damage to Israel’s coastline. They are also continuing to investigate the extent and effect of plastic pollution on the coral reef of Eilat.

“By communicating our results to the public, we hope to further enhance public awareness of the actions everyone can take to beat plastic pollution,” Professor Shenkar concludes.