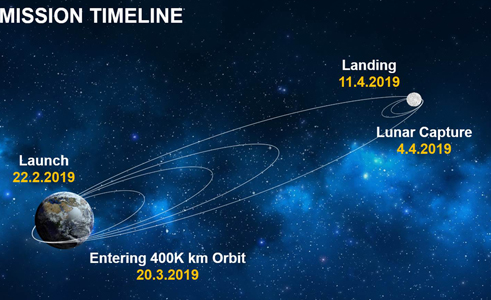 SpaceIL’s engineering team and Israel Aerospace Industries (IAI) this evening at 5:17 pm Israel time conducted the most critical manveuver to date of Beresheet’s journey to the moon – the Lunar Capture. This maneuver enabled the spacecraft to be captured by the moon’s gravity and begin orbiting the moon – and with the moon, orbiting the Earth. 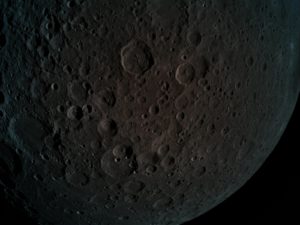 A picture taken by Beresheet – the far side of the moon during the maneuver at a height of 470 km from the moon. (Photo credit: Eliran Avital)

Today’s maneuver moved the spacecraft into an elliptical orbit around the moon, with the closest point (perilune) 500 km to the moon, with the farthest point (apolune) 10,000 km from the moon. Unlike the longer orbits around the Earth, Beresheet’s first lunar orbit will last 14 hours. Before it lands on the moon, each orbit thereafter will take only two hours. At the beginning of this week, Beresheet reached, for the last time, the closest point to Earth in its last Earth orbit, only 1,700 km, and continued on course to the point where it could join the lunar orbit, 400,000 km from Earth.

At 5:18 pm Israel time the spacecraft’s engine activated for six minutes, and reduced its speed by 1,000 km/hour, from 8,500 km/hour to 7,500 km/hour, relative to the moon’s velocity. The maneuver was conducted with full communication between Beresheet’s control room in Israel and the spacecraft, and signals in real time match the correct course. In the coming week, with expected intense engineering activities, many more maneuvers will take Beresheet from an elliptical to a round orbit, at a height of 200 km from the moon. The maneuvers will aim to reduce the spacecraft’s distance from the moon and reach the optimal point to conduct an autonomic landing in the Sea of Serenity in the evening Israel time, April 11.

SpaceIL Chairman, Morris Kahn: “The lunar capture is an historic event in and of itself – but it also joins Israel in a seven-nation club that has entered the moon’s orbit. A week from today we’ll make more history by landing on the moon, joining three super powers who have done so. Today I am proud to be an Israeli.”

SpaceIL CEO, Ido Anteby: “After six weeks in space, we have succeeded in overcoming another critical stage by entering the moon’s gravity. This is another significant achievement our engineering team achieved while demonstrating determination and creativity in finding solutions to unexpected challenges. We still have a long way until the lunar landing, but I‘m convinced our team will complete the mission to land the first Israeli spacecraft on the moon, making us all proud.”

IAI CEO, Nimrod Sheffer: “After a challenging journey, we made tonight another Israeli record and became the seventh nation to orbit the moon. Even before Beresheet was launched, it already was a national success story that shows our groundbreaking technological capabilities. Tonight, we again reach new heights. In the coming week, our talented engineering team will work 24/7 to bring us to an historic event on April 11. Good luck Beresheet.”

Highlights of Beresheet’s journey up to the lunar capture:

The spacecraft has performed seven maneuvers

The spacecraft has traveled 5.5 million km (over 3.4 million miles) in its orbits and will travel one million more while orbiting the moon

Beresheet has experienced two challenges, which the engineering team has been able to overcome: one with it’s star trackers, which were blinded by the sun more than expected, and the other involving undesirable restarts of the mission computer.

The Israeli spacecraft Beresheet was launched to the moon on February 22 at 3:45 a.m. Israel time (8:45 p.m. local time) from Cape Canaveral, Florida, on a SpaceX Launchpad by a Falcon 9 rocket as secondary payload alongside two satellites. The first data from the spacecraft was received by 4:23 a.m. and at 4:25 a.m. Israel time, when Beresheet deployed its landing legs as planned.