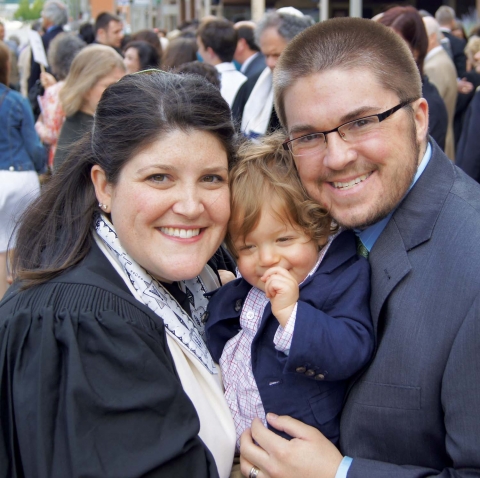 Newly ordained Rabbi Rachel Joseph aims to “connect young Jews to something greater” when she assumes the position of assistant rabbi at Congregation Beth Israel on July 1.

CBI leaders had identified the need for an assistant rabbi when the congregation exceeded 825 families. Senior Rabbi Michael Cahana explains, “We wanted every family to have access to clergy and as we grew, we knew we needed more help.”

Fortunately, as the board identified the need, Betty Rosenfeld and her family stepped forward to make a significant contribution with maximum impact. “Betty Rosenfeld’s extremely generous gift is supporting a major portion of the cost of the new assistant rabbi for the next several years,” he said.

CBI leaders began a vigorous search process beginning with in-person interviews at Hebrew Union College. Three hopefuls were flown to Portland to meet with congregants, teach classes, give sermons and participate in meetings. “It was a tough decision, but we thought Rachel Joseph would make a perfect addition to our community,” said Rabbi Cahana.

Rabbi Joseph has a long history of rabbinical inspiration. She grew up in Ohio watching her father, Rabbi Sam Joseph, lead congregations both nationally and internationally. At Ohio University, Athens, she majored in interpersonal communications with minors in political studies and women’s studies.

After graduation, she went to Washington, DC, to “pursue social justice in the halls of Congress.” She began as a legislative assistant at the Religious Action Center for Reform Judaism and then worked for Americans United for Separation of Church and State for seven years.

However, she found her time in the nation’s capital unfulfilling both spiritually and professionally. “As an uninspired, overworked and underpaid 20-something, I didn’t have time or interest in organized Judaism, but that changed when I met an amazing young rabbi who mentored me,” she said.

After almost a decade in Washington, she found her true calling. “The more time I spent at synagogue the more I was fulfilled personally, spiritually and intellectually in a way that my day job could not support. I realized I wanted to serve the Jewish people as a teacher, preacher and mentor. I was ready to help others discover their path to each other and to G-d,” she recalled.

She is thrilled to be coming to Portland. “Congregation Beth Israel is the center of Reform Judaism in the Pacific Northwest and I want to be a part of it,” she said, adding she is drawn to the congregation’s roots in history and strong outlook toward the future.

Rabbi Cahana hopes that Rabbi Joseph will help create connections within the congregation as well as reach out to young adults. Among many other projects, she will spearhead CBI’s young adult group, Jews Next Dor.

“Jews Next Dor is a vibrant and active group, but we haven’t had the capacity to devote as much clergy attention to them as we would like. Creating connections to young adults in the Jewish community is essential,” said Rabbi Cahana.

Rabbi Joseph strongly encourages the power of young people. “Portland is an exciting community and a place where people come to find meaning. I want to be a part of that process and help connect young Jews to something greater,” said Rabbi Joseph. She will also work with young families in the community, as she is moving with her husband, Gabe, and their
year-old son, Max Abram.

CBI’s cantor Ida Rae Cahana is ecstatic about Rabbi Joseph’s entry into the community. “Rabbi Rachel has the unique capacity to be fully present and really listen to whomever she is engaged with. We are lucky to have her,” said Cantor Cahana.