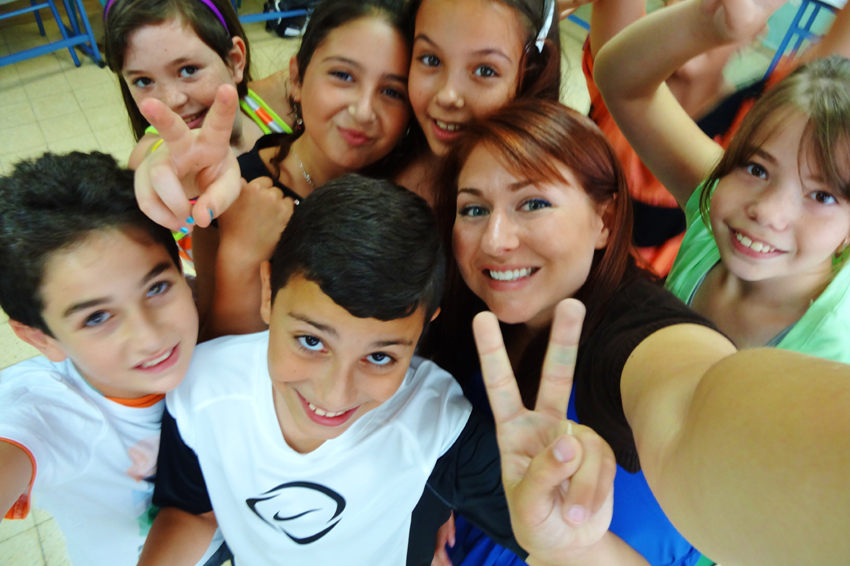 Soon after Jessie arrived, the war in Gaza erupted, putting the entire country on high alert as a barrage of missile attacks hit ever-widening areas. Though Golan Elementary in Nazareth Illit in Israel’s northern desert never came under fire, Jessie says, “The atmosphere was tense and the kids were worried. So much so that the principal came in to talk with them nearly daily about what was going on and had a child psychologist come in to answer questions and alleviate fears.”

Still, Jessie applied and was again accepted to return to Israel this summer with TALMA, The Israel Program for Excellence in English.

“This time, instead of being a classroom teacher, I will be creating an active workshop and floating into classrooms, as well as teaching other teachers how to implement it,” says Jessie. “I decided to return because, although last year was challenging, there is something wonderful about creating something meaningful and new in such a significant place. I am beyond excited to visit with some of my Israeli friends and see my kids from last year!”

Jessie isn’t alone in thinking last year was successful and something special.

Supported by ROI Community, an initiative of the Charles and Lynn Schusterman Family Foundation and the Steinhardt Family Foundation in Israel, TALMA was recently rated Israel’s top education program despite the war and other challenges. Inspired by the phrase “return on investment,” ROI funded TALMA to do just that. By immersing children in English at a young age, TALMA is intended to boost their achievements in high school and university, so they can ultimately land better jobs in the global economy.

So this summer volunteers will return for TALMA’s second year. Nearly 400 people applied, with 78 from across North America chosen to participate in TALMA’s second summer. Many of them will co-teach with Israeli teachers and help Israeli schoolchildren, who do not otherwise have meaningful, affordable educational options during the summer months.

Jessie says last year most of the children she worked with were second-generation immigrants – some from Russia and others from Ethiopia.

Last year wasn’t Jessie’s first trip to Israel. She was a Teach for America teacher with REALITY. She heard about TALMA through an email from a REALITY alumni. In Portland she works in higher education as a Success Coach for college students (insidetrack.com), but decided to jump at the chance to return to Israel yet again.

“The goal of the organization was very much in line with my personal beliefs and mission, and I felt I had a skill set that matched the needs of this inaugural group,” she says. “There is a certain energy that comes from the excitement and chaos of starting something from the ground up, and I was ready to be a part of that!”

In addition to returning herself this summer, she says she would also recommend the program to other young adults in future years.

“It is not for the faint of heart,” she cautions. “The sleep deprivation and classroom management (or lack thereof) makes for a challenging few weeks, but rewarding nevertheless! I learned more about myself in those three and a half weeks than I have on months-long traveling adventures. The kids, while often wild, hold a special place in my heart. I believe the students left with a better understanding of English and a larger scope of the world.”