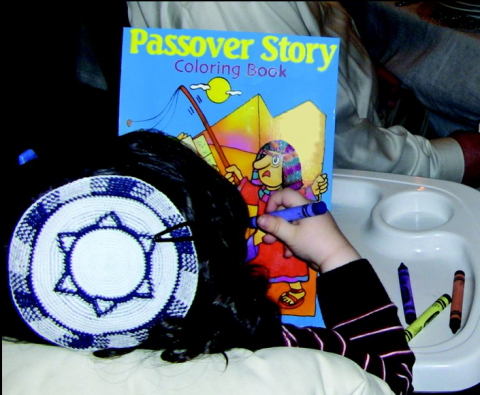 The crack of that first piece of matzah, destined to become the afikomen. Homemade matzah ball soup simmering on the stove, its magical aroma evocative of days of Pesach past. The warmth of family gathered together. Is it any wonder that Passover is the most widely observed Jewish holiday in America?

Why is this night different from all other nights? Unlike most Jewish holidays, observance of Passover (or Pesach) takes place in the home rather than in the synagogue. For parents with young children, this home-field advantage can be both boon and burden. No need to worry about getting your kids to services on time. However, as leader of the seder, now it is up to you to conduct the service in a way that captures the imagination of your little kinderlach. As a Jewish parent during Passover, you are tasked with teaching your children the epic story of the ancient Hebrews and their journey from slavery to freedom. Growing up in New Jersey, I recall that our seders were warm family affairs with delicious food, but the Haggadah readings were a little stiff. Pesach and the ritual of the seder meal really lend themselves to Oregon’s thriving do it yourself culture. With a bit of planning, you can create Passover memories that will last a lifetime.

As Pesach approaches, have your kids assist you in rounding up all the chametz (leavened products) in your home. With their help, box it up and dispose of it or sell it to a neighbor. To make the bedikat chametz ceremony (the search for chametz on the night before Passover) more fun this year, assemble your kids into The Chametz Squad! Parents, be sure to scatter small pieces of bread throughout the house before you deploy your team. Your mission: to seek and destroy all offending breadstuff throughout the house. Assign each team member a flashlight (candles for older kids) plus a feather and spoon (when crumbs are found, sweep them into the “dustpan” with the “broom”). After the search is completed, place the chametz in a paper bag and burn it in the fireplace (or outdoors). Be sure to recite the blessing before burning the chametz. Mission complete!

Visit Chabad.org and Kveller.com for coloring pages with Passover themes that are simple to print; then let their imagina- tion run wild. Last year my kids raided their closet and costume bins and reenacted a battle of Egyptians versus Slaves. Shop local and support Portland stores such as Everything Jewish and New Seasons for all kinds of fun items to liven up your seder table. KidKraft makes a Passover playset that includes everything you need for the perfect pretend seder, including the afikomen, matzah cover, seder plate and even a bottle of Passover wine. For an inexpensive alternative, make a seder plate out of construction paper, paper plates, glue and glitter.
Kids love to get crafty: Ask them to create art for the walls and decorations for the seder table.

As the Haggadah is the central text of the seder, what better way to make Passover more meaningful for your family than to make your own Haggadot? In our home we use a wonderful patchwork Haggadah that my wife, Leslie, forged from multiple sources, including the official CCAR Haggadah published for the Reform movement, numerous children’s Haggadot, and material culled from various seders we have attended in other people’s homes. You can visit your synagogue’s library or sisterhood gift shops to find kid-friendly Haggadot. Sammy Spider’s First Haggadah by Sylvia A. Rouss and The Animated Haggadah (with charming illustrations lovingly rendered in clay by Rony Oren) are both excellent children’s versions.

The 10 biblical plagues sent by G-d to punish Pharaoh are the perfect point in the seder for some silly fun. Each child at our seder receives a groovy little goody-bag of plagues. For the rivers of blood, we give the kids a kosher chocolate-covered cherry. For the plague of frogs, we give a small plastic frog. For the plague of lice, we give the kids small bags of confetti to toss in the air (beware: you’ll be picking it up for years!). For the wild beasts and diseased livestock we give small plastic lions, tigers and cows. Mini-bubbles represent the plague of boils, and a small bag of mini-marshmallows stands in for hail (Albertsons on Beaverton-Hillsdale Highway carries kosher for Passover marshmallows as well as other Pesach essentials). We give choc- olate “bugs” for the locusts. Dollar-store sunglasses create the illusion of darkness. To represent the final plague, death of the firstborn Egyptian sons, we give skull and crossbones stickers.
For the visit from Elijah, you can do everything from the ol’ disappearing wine trick to making/renting your own Elijah costume and really getting into character!

After the seder why not snuggle up with your little ones for some Passover entertainment? Here are my top five picks for greatest kids’ Passover TV moments:

1. “A Rugrats Passover”: If you have small children, this holiday classic is one they won’t want to miss. When Grandpa Boris and the babies accidentally get locked in the attic, it’s time for a retelling of the Passover story, Rugrats style. With Angelica as the Pharaoh and Tommy Pickles as Moses, you’ll be shouting, “Let my babies go!”

2. “The Prince of Egypt”: Sweeping visuals, a masterful score and a stellar cast will leave your kids mesmerized by this epic retelling of the Book of Exodus.

3. “Shalom Sesame: Jerusalem Jones and the Lost Afikoman”: In this Passover themed episode of the Israeli version of Sesame Street, the afikoman goes missing! It’s up to Kippi Ben Kippod and Jerusalem Jones, ably played by a young Sarah Jessica Parker, to save Passover.

4. “The Ten Commandments”: Best Passover movie ever! With Yul Brynner as Pharaoh and Charlton Heston as Moses, dazzling special effects and a cast of thousands, you’ll be swept away like baby Moses down the Nile.

Be sure to include an orange on your seder plate in solidarity with the girls and women at your seder, and place a Miriam’s cup filled with spring water beside Elijah’s cup of wine. These contemporary customs honor women’s contributions to the survival and prosperity of the Jewish people and demonstrate that Judaism is a living faith. To that end, build on the themes of freedom and slavery that define the holiday. Remind your children that African-Americans were slaves less than 150 years ago and that around the world people are still held in captivity and slavery today. The point of the holiday is making history and tradition come alive for your kids. If you make being Jewish fun, you might never even hear the age-old plea, “When do we eat?”

Rich Geller is a freelance writer and father of three children.