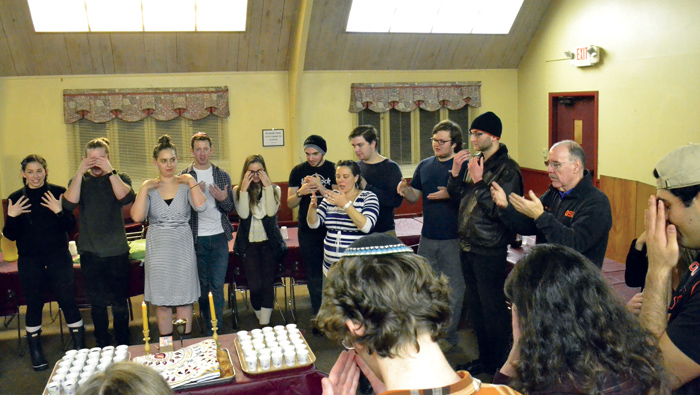 Hillel at the Oregon State University is finally off the ground thanks to a grant that has funded a part-time position for a staff member on campus. Until winter term began in January, a staff person from Hillel at University of Oregon would shuttle between Eugene and Corvallis, bringing limited programming but also a growing interest.

Rachel Chodorow-Reich started after the new year as director of student life for the Oregon Hillel Foundation at OSU, working 20 hours a week to bring Jewish programming to campus. She says in the few months she’s been there, the impact has been great.
“The more time I am here, (the) more Jews come out of the woodwork. I hear them say, ‘I didn’t know there was a Hillel here!’ ” says Rachel.

While there has been a Hillel on and off at the school for years, Rachel is the first staff member to live and work in Corvallis, which was made possible by a grant from Hillel International. For the past three years, the Oregon Hillel Foundation has used funding from the Jewish Federation of Greater Portland to send a staff member to Corvallis on occasion.

Rachel says she feels a great interest from students to plan and host events with Jewish content. The Hillel doesn’t have a physical space, so they are using coffee shops, the library and the student union when they gather.

“It’s community waiting to happen,” Rachel says. “We have a really strong board who are excited to make big things happen.”

Rachel helped plan OSU’s first Passover seder this year, where 65 undergraduate and graduate students gathered together on the first night.

“It was really wonderful,” she says. “It’s an example of how ready the community is for this type of programming.”

Rachel planned an array of other programming in winter and spring term, including Shabbat dinners, Yom Ha’atzmaut celebrations, and gatherings with the Muslim Students Association and the Ettihad Cultural Center (the Middle East and North African cultural center on campus).

Rachel’s impact is limited by the hours in her position. She hopes funding will be found to add five or 10 hours to her workweek next year.

“The dream is to make it full time,” she says. “There is so much more that can happen.”

Andy Gitelson, Oregon Hillel Foundation’s executive director, also has a vision for OSU’s Hillel down the line. He hopes to fund an associate director position one day and then build out shared positions with UO in Eugene, such as a shared rabbi and engagement staff.

Andy, who is based in Eugene, says the organization is thrilled with Rachel’s first months on the job.

“Rachel has all the amazing skill sets, the passion and the drive, even though she hadn’t spent time in the Hillel movement before. She says she didn’t find her dream job, her dream job found her,” he says.

Rachel’s background was as a teacher, camp counselor and youth group leader, and she had been working with teens at the multi-denominational Beit Am in Corvallis when the position opened up.

“We’ve seen an exponential growth in the student participation,” he says. “The most important piece is that we have someone building and strengthening relationships with students, and that’s the key to any student organization on campus, the human resources on campus and how they can connect with students.”

Rachel is able to provide that connection for students as well as track the impact and develop partnerships on campus.

“However, there are more hours than we have funding for. Students have seen this infusion of staff time and energy and unfortunately Rachel has to make choices with her time, and we’re hindered by that,” Gitelson says.

“As we look ahead for next year and beyond, we are looking at how to increase the position for 30 hours or full time. (This is) both for her professional development and growth, because it’s hard to keep someone in place in a part-time job. It’s also the right thing to do by our students.”

Andy believes having a Hillel at OSU will also attract more Jewish students to campus. He says the engineering program is attractive to many out-of-state students, who just accept Jewish life won’t be part of their college experience.

“We’re trying to educate admissions staff that we are here, so when prospective Jewish students ask if there is a Hillel at OSU, the staff can say yes, even though we don’t have a physical building.”

Andy estimates there are about 1,600 Jewish students at UO and at least 400 at OSU.
To connect with Hillel at OSU, Rachel recommends using Facebook:  facebook.com/groups/OSUHillel/ or email rachel@oregonhillel.org.