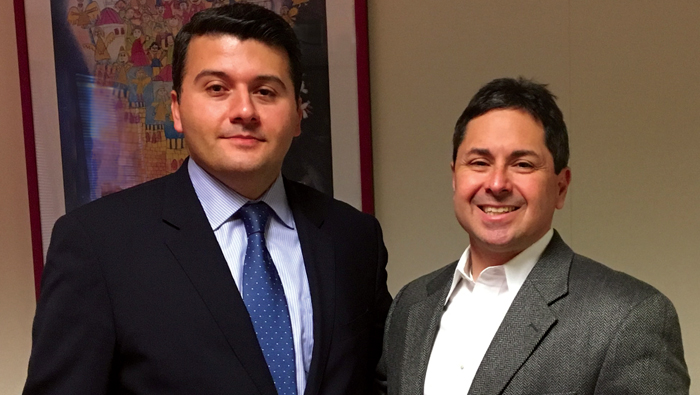 Earlier this year, my professional team had the pleasure of meeting Nasimi Aghayev, the Consul General for Azerbaijan stationed in Los Angeles. Mr. Aghayev oversees 13 Western states, and this was his first trip to Oregon. On his two-day visit he met with Gov. Kate Brown, Mayor Charlie Hales and other political leaders. But he made a special call and time to connect with the Jewish community – both the Jewish Federation and Greater Portland Hillel.

Azerbaijan is a landlocked country nestled against the Caspian Sea, with its borders touching Russia, Georgia, Armenia and Iran. Baku is the capital of this oil-rich country, where the vast majority of its citizens are Shiite Muslim. For most of the 19th and 20th centuries, while under the rule of Czarist Russia, Azerbaijan produced 50% of the world’s oil supply. When the czar fell in 1918, Azerbaijan quickly formed a secular republic, which included granting women the right to vote (a year before the United States). Less than two years after declaring independence, the country fell under the restrictive rule of the USSR, and then had to wait 71 years to regain its independence with the fall of the Soviet Union. Today, the country has the largest economy in the region due to its oil and is using those resources to invest elsewhere, including the State of Israel.

Azerbaijan has 30,000 Jews (one-third of Ashkenazi descent and two-thirds of Sephardic descent) with one-third living in Baku. The country has never had a history of anti-Semitism – in fact, the people are quite proud of the strong relations between the Muslim and much smaller Jewish populations.

People believe that when the Second Temple in Jerusalem was destroyed, Jews moved to Babylonia, then to what is modern-day Iran and many later came to Azerbaijan. The oldest community of Jews today lives in the Caucasus Mountains region near Guba, where they became known as “Mountain Jews.” Historians believe Jews first settled there in the 5th century; many today speak their own language, Juhuri, which is a blend of Farsi and Hebrew. In the Guba region is a village called Red Town, where all 4,000 inhabitants are Jewish.

The Consul General is very proud of the religious harmony in his country. Not only are Jews welcomed in the country, but the Shiite and Sunni Muslim communities have very close ties. They have unity prayer services at the largest mosque in the region, marry one another and coexist peacefully.

Azerbaijan’s excellent relationship with Jews extends to the State of Israel. Israel opened an embassy there in 1992, the first in the region. Israel is one of Azerbaijan’s top three trade partners, and Azerbaijan is one of Israel’s top five trade partners. In fact, half of Israel’s oil supply comes from Azerbaijan. Beyond oil, there is sharing in technology, agriculture, solar energy, medical cooperation, cybersecurity and defense. The two countries conduct over $6 billion in trade annually. There is also a direct flight from Tel Aviv to Baku.

We should be proud that the American Jewish Joint Distribution Committee, one of our overseas funding partners, has been active in Azerbaijan ever since the fall of the Soviet Union.

A few other interesting notes:

30 million Azeris (what people from Azerbaijan are called) live in Iran (out of a total population of 75 million people). Iran is concerned by this large secular population from another country. Therefore, there are no Azeri schools in Iran.

A member of the Azerbaijan parliament is Jewish (a Mountain Jew).

A Supreme Court Justice is an Ashkenazi Jewish woman.

The meeting with Consul General Aghayev was enlightening and positive. And how remarkable that one of his top priorities for his visit was to meet with representatives from the Jewish community! It was nice to learn more about Azerbaijan and, more importantly, to hear such positive thoughts about the State of Israel and the Jewish people from a country in that region of the world.