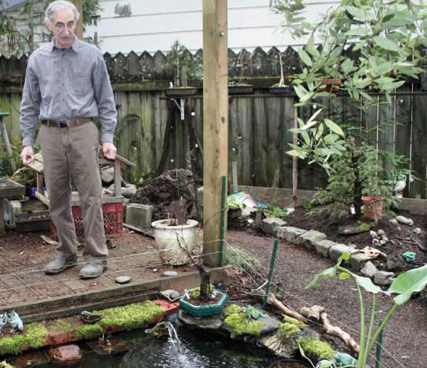 Stanley held spends hours by the window of his 1899 farmhouse in the city. here amid the finches, hummingbirds, possums and resident family of squirrels, nearby Powell Boulevard seems miles away. now retired, the former zookeeper and raptor rescuer is also a self-made expert at making backyard wildlife feel right at home.

“The sunflower seed feeder attracts finches all year round,” Held said over a cup of echinacea tea made from the herb garden tended by his wife, Karen. “In the fall we let our herb plants go to seed for the birds. Suet feeders attract bushtits, warblers and chickadees. We try to have bird-friendly plants like the yellow forsythia bush and little red fuschias.”

Held’s love of all things natural started in Queens, NY, where he was brought up in an observant Jewish home. His favorite Hanukkah presents were chem- istry sets with microscopes for viewing water from the surrounding wetlands. He always wanted to work at a zoo and came to Oregon after completing a two-year agricultural program. He worked with elephants, giraffes, even snow leopard kittens, before specializing in birds.

“The zoo had recently opened the African exhibit, and three of us took care of four aviaries,” he said. “Outdoors we had big marabou storks. They can be dangerous. They’re as tall as I am and have big bills. We had weaverbirds. We gave them grass every day and they wove nests. The zoo kept beehives to feed African bee-eater birds. They grabbed the bee in their bill and pulled the stinger out before they ate them. It was fascinating.”

When the zoo’s animal hospital closed, Held helped start a nonprofit raptor rehabilitation center. Located on Sauvie Island, Birds of Prey Rescue Northwest dealt mainly with wing injuries. Most bird clients had been shot, trapped and hit by cars. Loggers found baby owl nests in felled trees. “We invited the people who found the birds to watch us release them,” Held said. “The whole family and neighborhood showed up. You’d always get a smile.”

Walking through his backyard, Held pointed to evergreen trees and the corner pile of branches. “Birds need a place to hide where they can fly in and out,” he said. “Everything eats little birds – crows, blue jays, Cooper’s hawks. And, they need places to get out of the rain.”
He advises feeding birds only in winter and early spring, since native seeds and insects form a complete diet during sum- mer and fall.
“The most important thing is clean water,” Held said. “Birds bathe and drink out of the same water and poop while they’re bathing.” In addition to the high fence enclosing the yard, a large goldfish pond includes an electric fence for keeping raccoons and possums at bay.
“The birdbath is electric so it doesn’t freeze,” Held said. “I clean it out twice a day with a hose and once a week with a little bleach. I scrub it. I was a zookeeper. This isn’t work for me.”

Polina Olsen is a freelance writer and author in Portland.