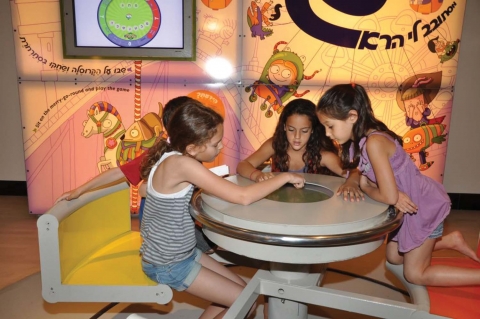 Hot on the heels of their success with the interactive A-B-See-Do exhibit at Israel’s Diaspora Museum, Tamar Hadar and Efrat Adiv came to Portland to share their vision of the future of children’s museums at the 2012 Association of Children’s Museum Conference held in Portland this year.

The two women presented a lunch program at the Portland Hilton in May during one of the three days of InterActivity 2012: The Wonder of Learning, which drew 750 participants from around the world.

At the Diaspora Museum, Tamar and Efrat created a 5,700-square-foot interactive exhibit about the Hebrew language that drew more than 50,000 visitors in six months. In English the exhibit is called A-B-See-Do and in Hebrew it is A-ba-ga-da (ga means touch and da is to know). The exhibit enables families with children between the ages of 1 and 12 to experience learning through self-exploration and play within the framework of a family outing.

“We emphasize the visit as a family experience,” says Efrat. “The next generation (of children’s museums) will be family museums. That’s why we were asked to lecture.”

“People want to see how we’ve actually done it,” adds Tamar, noting the exhibit at the Diaspora Museum attracted people from 1 to 89.

“We wanted to share with people the way they can achieve more in their museums,” says Efrat of their presentation at the museum conference. “And we want them to share with us … we came to learn about fundraising.”

The duo’s Children’s Museum of Tomorrow Association is developing a national center in Israel for creativity and innovation, making it experiential education for children.

“We have the concept, we have the land, we need funding,” says Efrat.

“The museum will be about life skills,” she explains. “The world changes so fast, we need to teach kids how to learn by themselves. … Israelis know high tech is a tool. It has to enable. We teach children to use the tools that surround them.”

As a nonprofit startup company, the women say they have no problem sharing their knowledge and experience. They say they hope the national center in Israel will have an impact on the world.

They also are developing traveling exhibitions similar to the Hebrew language exhibit at the Diaspora Museum.

“The CEO of the Diaspora Museum told us we were change-makers for the museum,” says Tamar. “We brought in 50,000 visitors in six months, who then moved on to other exhibits.”

In an email, Irina Nevzlin Kogan, president of the NADAV Foundation, which supports Beit Hatfutsot (the Diaspora Museum), said: “As a foundation that is dedicated to strengthening the sense of Jewish peoplehood, we were extremely enthusiastic about the idea of a multi-sensory free-play journey of learning Hebrew that is fun, and at the same time promotes educational goals. The exhibition is a wonderful means to create a special connection between children and culture, and when Tamar and Efrat first presented us with this idea, we saw its great potential and decided to get involved in the development and construction process from the initial concept until the final completion of this incredible project.”

For more information on the project, visit www.cmota.com.