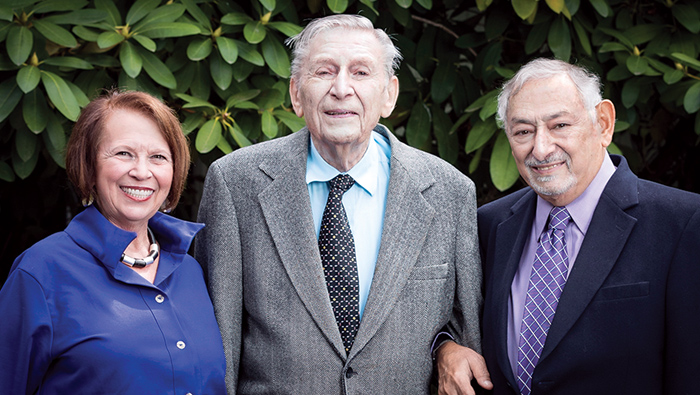 Seventeen years ago, Dr. Merritt Linn created an award to honor Rabbi Stampfer on the 50th anniversary of his ordination. This year, Gary and Carolyn Weinstein will receive the Joshua Stampfer Community Enrichment Award.

For the first several years, the dinner event was held at outside venues; but in 2014, the celebration was permanently moved to Congregation Neveh Shalom, the congregation the rabbi emeritus has called home for more than 60 years.

The Community Enrichment Award wouldn’t exist without the support of the organizations that Rabbi Stampfer helped found. They are the Harold Schnitzer Family Program in Judaic Studies at Portland State University; Camp Solomon Schechter; the Institute for Judaic Studies; the Oregon Jewish Museum and Center for Holocaust Education; and, of course, Neveh Shalom.

The purpose of the award is to honor an individual or organization that has enriched Jewish culture, education and community life with the dedication exemplified by Rabbi Stampfer. The awardees – chosen by representatives of the five local organizations the rabbi helped to establish and by previous honorees – can be Jewish or non-Jewish, living or deceased, and may be recognized for a lifetime achievement or a specific project.

The award is one of three that will be presented annually at a non-fundraising dinner at the synagogue.

This year the committee added an interfaith award. The Rev. Dr. Rodney Page, retired executive director of Ecumenical Ministries of Oregon, will be the first recipient of the Joshua Stampfer Interfaith Community Enrichment Award.

In 2006 a youth recognition award was created to give a moment in the spotlight to our outstanding Jewish youth who have demonstrated exceptional devotion to advancing Jewish learning, creating a more ethical and peaceful world through Jewish values and the exercise of tikkun olam. By recognizing their early accomplishments and witnessing the high esteem shown for the evening’s honorees for their lifetime of achievements, and for those who preceded them, the committee hopes that our young people will be encouraged to continue down the path they’ve already begun to forge. This year the award will have a new name, “The Merritt Linn Youth Award,” honoring the man who helped create the community enrichment event and saw it through until his passing last year. The name of the youth honoree was not available at press time.
The centerpiece of the evening will be the presentation of the 2016 RSCE Award to Gary and Carolyn.

Gary was born in Portland, grew up in Astoria and returned to Portland as a teen. Carolyn was born in Minot, ND, grew up in Spokane and arrived here as a teenager. They met through BBYO at the Jewish Community Center’s former location. Following college studies in Oregon and Washington, they married in 1956. Throughout their 60 years of married life, they have exemplified leadership, involvement and volunteerism in the Portland Jewish community and the Portland community at large.

Gary is well known for his dedicated service on many boards, having begun his organizational activities while in high school as president of his AZA City of Roses BBYO chapter. He has served on a variety of boards including Congregation Neveh Shalom (two years as treasurer), Jewish Family & Child Service and Store to Door. He served as chairman of the Oregon Bankers’ Association Consumer Credit Committee as well as the Portland Agenda Club. He is currently volunteering with Sinai In-Home Care, Start Making A Reader Today and the Jewish Free Loan Committee. He and Carolyn twice co-chaired Super Sunday for the Jewish Federation of Greater Portland. Together they have been volunteer cooks at the Goose Hollow Family Shelter for the past seven years. Gary retired in 2007 after 47 years of work in the field of banking. His main forte was as a “creative thinker” in developing the content for programming for banks.

Carolyn has lent her talents and skills to more than 25 organizations, taking leadership roles in all. She is a recent recipient of the Good Neighbor Award, presented by the Portland Metropolitan Association of Realtors, as well as the Kipnis-Wilson/Friedland National Lion of Judah Award, presented by the Jewish Federations of North America. Carolyn was featured in the March 2016 issue of Oregon Jewish Life in connection with this award.

As a couple, Carolyn and Gary truly personify a “dynamic duo” who give unstintingly in their support of the community.