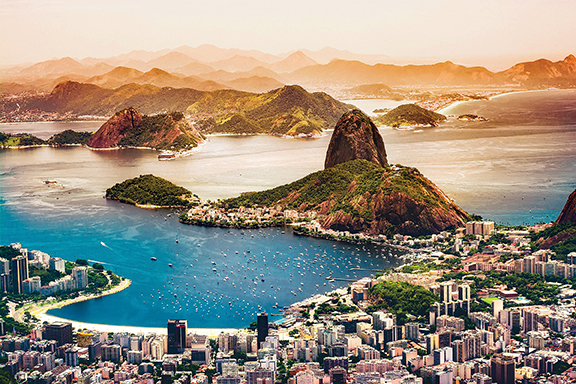 Brazil was nothing like I had expected it would be. Lush, bustling and diverse, it was a thriving country of varied landscapes and cultures. My family’s primary reason for going was to visit our 17-year-old daughter, Lauren, who in 2004 was a foreign exchange student for the year. Despite the exhausting 20-hour trip from the States, I was totally energized as we left the airport and drove through sugar cane fields, rolling hills and tiny towns, crunching fresh cashews and sipping ice-cold coconut water we bought from a roadside stand.
Brazil is a huge country, slightly smaller than the United States, with regions that vary from desert to mountainous to tropical. Its spectacular 4,655 miles of Atlantic coastline is home to numerous coastal cities where modern buildings stand adjacent to colonial forts and churches. And everywhere you go, there is music, people and chatter in the streets, although rarely in English.
Almost 75% of Brazil’s 186 million residents are Catholic. When Lauren first decided to go, this caused us some concern because we knew that she would have little opportunity to connect with Jews for an entire year. But I was not prepared for the fact that once she arrived at her destination in Campina Grande, there was not a single Jewish person in that city of 350,000 people. And that no one, from her large, extended Brazilian family to her classmates and friends, had even met a Jew before!
The Jewish mother in me screamed, “Book Lauren a flight from Rio de Janeiro to Tel Aviv now!” But my rational mind and reasonable husband kept me in check. History helped me too, as we Jews have lived in the Diaspora for more than 2,000 years successfully preserving our faith, rituals and community. Hopefully, Lauren would be able to do the same.
My prayers were answered at the end of her first month, when she called and asked if I would send a “Shabbat box” so she could light candles on Friday night. What she missed most, she confided, was our family connection – lighting candles and sharing Shabbat dinner as a family.
As Rosh Hashanah approached, she searched for a synagogue to attend services, which had become even more important to her now that she had so little opportunity to be with other Jews. With a great deal of effort, she found one in Recife, a city more than two hours away, and a Jewish family hosted her. We marveled that as Lauren sat in the women’s section of the Sephardic synagogue next to the rabbi’s wife and prayed in Hebrew and Portuguese, our family said the same prayers 10,000 miles away.
In December, we sent her a “Chanukah box” – complete with menorah, candles, dreidels and gelt so that she could celebrate the holiday. But she had other ideas. In addition to celebrating each night by herself, she was determined to share the holiday with her new family and friends, to teach them about the Maccabees and the re-dedication of the Temple in Jerusalem. And, of course, to treat them to delicious potato latkes and homemade applesauce, which, without a grater, took the entire day to make!
Like most parents, I often wonder whether the ideals, values and family traditions that we have tried to instill in our children will be important to them as they mature into adults. I know first-hand how difficult and painful it is to let our children go their own ways. But I also know that the choices they make and the paths they follow will lead them to better understand who they are and what they truly value. And, if we have given them the tools and confidence to explore, we must be patient and have faith that they will find their own way to create a meaningful relationship to Judaism, God and the Jewish community.
Amy Hirshberg Lederman has written more than 300 columns and essays that have been published nationwide. amyhirshberglederman.com