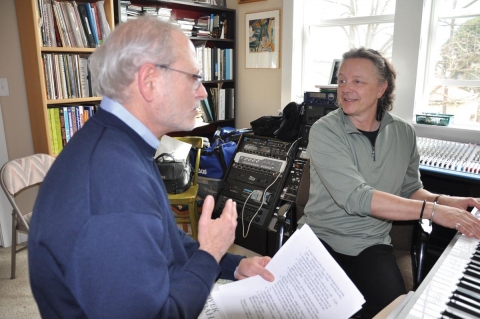 Throughout history, humanity has instinctively understood the power of music to heighten emotions. The strident beat of war drums, melodious Torah chants, ethereal church hymns and the ominous rhythm of the Jaws movie theme have all used the language of the soul.

Yet Rabbi Alan Berg says that he has never heard a liturgical composition to heighten the experience of the climax of the most widely celebrated holiday on the Jewish calendar, Passover. Each year Jews at Seder tables around the world relive the Exodus experience. Despite the proliferation of songs found in nearly every Passover Haggadah, no epic composition targets the seventh day, when the Israelites crossed the Red Sea and moved from slavery to freedom culminating in their acceptance of the Torah at Sinai.

Portland pianist and composer Michael Allen Harrison has teamed up with Rabbi Berg to create “Crossing Over: A Musical Haggadah” as a gift to the community from the Oregon Area Jewish Committee, the local affiliate of American Jewish Committee.

“Crossing Over will call the emotions of the seventh day (of Passover) to our heart,” says Berg.

“It has the heart and spirit of the seventh day like nothing I am aware of,” adds Harrison.

On the main stage: a Seder table for the singers and narrators; Harrison and his piano will be in the foreground, and below on the sides, a small orchestra and a guitarist. Wait, a guitar?

Yes, Harrison’s brother Brian will bring his guitar to lend a light-hearted and fun flavor to the Israeli folk song feel of the music for the Four Questions.

“This will be a musical theater experience,” says Harrison, who is well known for his December concerts at The Old Church, his Jazz at Jimmy Mak’s and his annual “Ten Grands” concert, a fund-raiser for his Snowman Foundation to promote music education.

The musical seder will be performed twice at the Mittleman Jewish Community Center April 12 and 15 – the sixth day of Passover and the Sunday after Passover.

The days were chosen in part to enable everyone from across the spectrum to attend the concerts (Orthodox Jews would not be able to attend if it were on the seventh day). OAJC hopes the concert will bring a true unity to the community by attracting the unaffiliated and the affiliated from Reform to Orthodox for a new spiritual experience.

“We hope people will have the experience of crossing over, not simply observing it,” says Berg. “Crossing over is there to be deepened. It is that deep in tradition, but for many today, the seventh day is elusive. It is the climax of the story. I hope people who attend will get some element of that transformation.”

“This is something we are creating as a gift to the community,” says Harrison. “I am a board member of OAJC. We wanted a way to reach out to the community, and I’ve been sitting on the idea of doing something deeply Jewish for 20 to 25 years. My father (of blessed memory) encouraged me to do ‘my own Jewish project,’ but at that time I didn’t know what it would be.”

Coincidentally the Torah ark created by Harrison’s father, Joe Harrison, is the ark at Beit Haverim, where Berg is now the rabbi. Berg and Harrison first met in the 1970s when Berg was the assistant rabbi at Congregation Beth Israel.

Berg, who collaborated on the PBS Hanukkah at Grover’s Corner special and taught the lyrics of Walt Whitman at the university level, has written the lyrics for Harrison’s Passover compositions.

“I develop lyrics to evoke Yizkor (memorial candles are traditionally lit on the seventh day) and not to get out of line with what might be appropriate Jewishly,” he says.

OAJC President John Moss, who brought Harrison onto the OAJC board to broaden the organization’s perspective by adding artists and other eclectic professionals to the board mix, also has a long history with the composer. He first heard Harrison play the piano when he was in a Portland hotel on a house-hunting trip before moving to Portland more than 20 years ago.

“I can hear Michael’s signature no matter what he plays,” says Moss.

“We envision this as an ongoing tradition that will be part of the community’s Passover experience every year,” says Harrison. “We also want to publish it in a way that it can be done by other communities.”

Berg adds, “I believe it has the potential to add to what American Jews are able to experience as a community.”

The concert will feature some traditional Passover melodies, but 90% of the music will be original compositions by Harrison, whom Berg describes as a “composer with a Jewish heart.”

“Because this is so grounded in tradition, yet so modern, we think this could become an integral part of people’s experience for Passover,” adds Berg.

“The whole point is, this is a remembrance that feeds our soul. We are going to feast on it in a different way,” says Harrison.

Listening to the Crossing Over theme, Berg calls it “prophetic – it opens you up so much, you can feel something extremely holy.”

Harrison says that view reflects a phrase one of his fans told him, “Your music cleans up my heart.”

Overall, the concert has a classical feel, but one flavored by Harrison’s experience in jazz, folk and Jewish melodies.

“This will be a huge communal experience,” says Moss. “Just as we were all at Sinai, here the Reform and Orthodox can come together for an intensely personal event and new music that ties us all together. We want this to be for the most orthodox to the most liberal, just like at Sinai.”