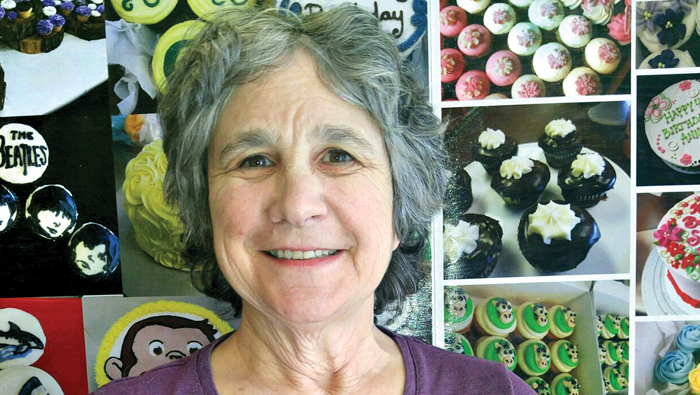 When Ida (Green) Gurule graduated from the University of Oregon with a degree in anthropology and a master’s in public health, she never imagined that she’d end up becoming the Cupcake Queen of Central Oregon. Yet today, she and her team go through 500 pounds of powdered sugar in a week to supply the three Ida’s Cupcake Cafés in Bend and Redmond, close to twice that in the summertime, and many online reviewers tout the cupcakes as the best they’ve ever tasted.

Ida wasn’t one of those little girls who baked in the kitchen with her mommy. She grew up in Southwest Portland, attended Wilson High School and was confirmed at Congregation Beth Israel. Her family included three siblings, a dad who was a Polish immigrant and a mom from the long-time Portland family who started Gevurtz Furniture. It was from her dad that she learned to love, love, love to eat bread. Even today, she says, “I can eat a loaf by myself!” It wasn’t until her own kids were growing up, though, that she started to get serious about baking, and, of course, she started with bread.

She and her husband, David, moved the family to St. Louis in 1987 because they just couldn’t turn down a plum job he’d been offered in public health. Ida wasn’t working – she’d just had twins, children #3 and #4. Ida met new friends and reconnected with her Jewish “spiritual self” at Central Reform Congregation, and it was there that she met a woman who made the best challah Ida had ever tasted. Ida had been tinkering a bit with sourdough, but she became a challah convert.

“I tweaked it a little, adding more honey, and everyone in the family loved it. It became a good reason to light the candles, say Kiddush and then get to the HaMotzi so we could eat the challah. I made it every Friday night!” When they moved to Tacoma four years later, Ida started a challah business, first out of their garage and then later in a commercial kitchen she and David built in their basement.

“First I took my challah to a produce stand that sold gourmet food and said, ‘You have to taste this.’ They loved it, and I ended up making about 20 loaves every Friday, and they sold it out.” She would wake up really early to start the dough and then finish the baking while the kids were in preschool. Soon after, she developed cookie recipes and before long she branched out to a local farmers market.  “I made rugelach and hamantaschen plus more goyim things: snickerdoodles, lemon bars, marionberry bars and more. I was making a little money and it was a ton of fun.” By the time she had added a gourmet grocery to her client list, she was baking cookies on Thursday and 100 loaves of challah every Friday. The only thing keeping her from opening what she calls a “real bakery” was the lack of a partner to help her tackle the details.

In 2006, with the kids out of the house, she and David moved – for the last time – to Bend. They were tired of the rain and longed to be near family. They also figured Bend would draw the kids home more often than Tacoma would. As they did in every city, they found a congregation, in this case Shalom Bayit, and then Ida got to work. First she and her sister, Nancy, started a move management company, assisting seniors who wanted to downsize and organize, but then they decided to help Ida realize her dream by opening a bakery. Nancy eventually returned to focus on the move management company, and the rest is, for Ida and the many fans of Ida’s Cupcake Café, sweet, sweet history.

For the first two years, the business was a carry-out bakery with cookies, bars and bread. Although Ida made only enough money to cover her expenses, she stuck with it. When a space across the street opened up, a storefront with room for tables so people could sit, drink coffee and linger over her treats, Ida took the plunge and changed her location and focus. She wanted a café and she decided on cupcakes.

“I created the recipes and honed them by trying them out on my Jazzercise class victims,” she remembers with a laugh. “Cupcakes are so much easier and they take less time. Why would I kill myself making labor-intensive cookies when I can make a huge batch of delicious cupcakes and people will buy them?” Ida’s Cupcake Café was born. She actually kept making challah at first as well, but she stopped two years ago. Cupcakes rule!
Of course the cupcakes and frosting are delicious, but what makes Ida’s Cupcake Café unique is the mix-and-match ordering adventure. Cupcake lovers, picture this: you study the list of cupcake flavors available that day: chocolate, vanilla, red velvet, peanut butter, carrot, lemon poppy seed, seasonal novelties like passion fruit for Valentine’s Day … you get the idea. But then you look at the list of the day’s frostings, like chocolate, vanilla buttercream, coconut, peanut butter, raspberry, salted caramel … and you get to put together the combination that makes you happy. Peanut butter cupcake with raspberry frosting! Red velvet with coconut! Vanilla with salted caramel!

“Some people do get overwhelmed,” Ida concedes, “and so we have a list of popular combinations.” They offer mini, regular and extra-large cupcakes and have gluten-free options. Ida also created a Party in a Box and a Cupcake Parfait for people to take home, and they are popular via mail order. (Please note that they do not ship June 15-Sept. 15.) The now three cafés are absolutely slammed every summer with the onslaught of tourists combined with their huge wedding business.

What’s next? I know what I want to be next: an Ida’s Cupcake Café right down the street from MY house.

'Countless Cupcake Combos: A recipe for fun!' has no comments