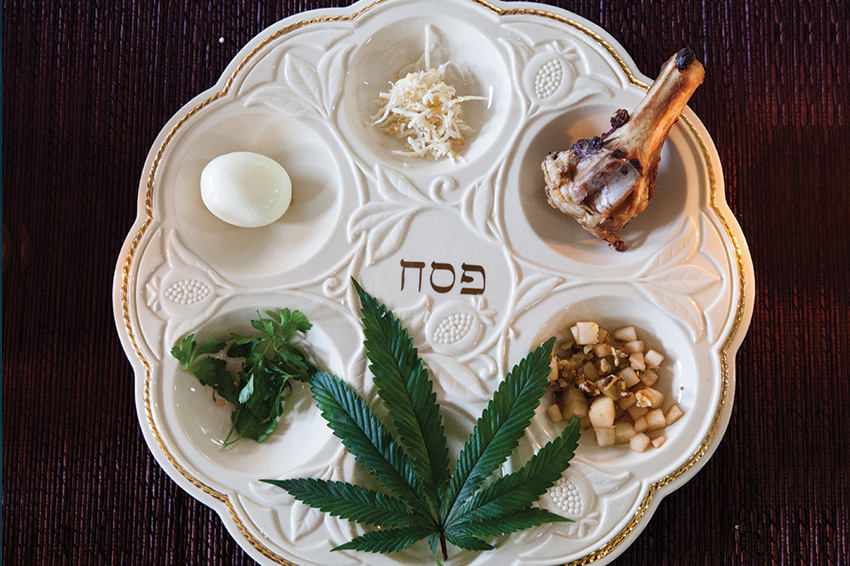 Oregon enters a brave new world July 1 when recreational marijuana becomes legal across the state. Oregon has long been a trailblazer when it comes to cannabis, becoming the first state to decriminalize the plant in 1973, and the second to legalize medical marijuana in 1998.

Cannabis has long been a part of the Jewish experience as well. From the ancient land of Israel to modern-day Israel and America, Jews have long consumed cannabis for a variety of purposes.

In the Torah G-d grants all plant life on Earth to humanity in Genesis. The Torah also refers to keneh bosem, which etymologists have translated to “sweet cane.” Some researchers speculate the cane is cannabis. Keneh bosem is one of the five ingredients in the holy anointing oil applied to the tent of meeting and the heads of the high priests in the book of Exodus.

Archeological evidence points to the use of medical cannabis in ancient Israel. The remains of a pregnant young woman with several grams of hashish were discovered in a cave west of Jerusalem. It is presumed the hashish was used to ease the pain of childbirth, since she was about nine months pregnant when she died in approximately 300 B.C.E.

One of the most prolific and influential Torah scholars and physicians of the Middle Ages, Maimonides wrote about the medicinal uses of cannabis oil for headaches and to unblock ears.

Modern Israel first legalized marijuana for therapeutic purposes in 1992 and has been a global leader in medical cannabis research.

Many leading counter-culture figures of the ’60s were Jewish, including activists such as Yippie founders Abbie Hoffman and Jerry Rubin, and of course Robert Zimmerman, aka Bob Dylan. These early proponents of marijuana decriminalization and legalization had a common enemy in President Richard Milhous Nixon. On June 18, 1971, President Nixon launched the “War on Drugs” declaring drugs to be “public enemy number one.”

Nixon certainly had no difficulty establishing a connection between Jews and weed. In a conversation with his Chief of Staff, H.R. “Bob” Haldeman, Tricky Dick opined, “You know, it’s a funny thing, every one of the bastards that are out for legalizing marijuana are Jewish. What the Christ is the matter with the Jews, Bob? What is the matter with them? I suppose it is because most of them are psychiatrists.”

In the intervening decades, as subsequent administrations expanded the scope of the drug war, the U.S. prison population steadily escalated with many of these new inmates convicted of nonviolent drug offenses.

Standing at the nexus of progressive Judaism and cannabis activism are Roy and Claire Kaufmann of Portland, cofounders of Le’Or (which means to light up or illuminate), a nonprofit that challenges the drug war by framing the issue of cannabis through the lens of Jewish social justice. Roy is a former gubernatorial speechwriter and currently works in public relations; Claire has an MBA and a background in marketing.

Asked about her inspiration for Le’Or, Claire says, “Le’Or helps to connect the dots in the Jewish community between cannabis consumption and the larger impact of the war on drugs. … in general, fewer Jews suffer the ramifications and legal consequences associated with the drug war. The war on drugs is doing harm to millions of people, most of whom are people of color. … We are morally obligated to do something.”

To that end the couple hosted a third-night “Cannabis Seder” to prompt discussion of drugs, race and other issues related to social justice. The seder was sponsored by Dr. Bronner’s Magic Soaps and a number of local cannabis-related businesses, including Qi Chocolates, Oregon’s Finest and Lief Medicinals. Le’Or was started with seed money from David Bronner, the CEO of Dr. Bronner’s Magic Soaps.

The Kaufmanns composed a Haggadah for the occasion. Many elements of the seder such as the four questions, the four sons and the 10 plagues were modified to play on the themes of the injustice of the prison-industrial complex, the suffering of its victims, and the arbitrary nature and application of drug laws.

As Claire explains, “Le’Or is a lot more than ‘holy smoke.’ Le’Or’s mission is to engage the Jewish community around the issues of cannabis legalization, prison reform and larger drug peace. The Jewish community has a long way to go before it begins to fully understand how these issues are all related.”

As more and more states “legalize it,” medically or otherwise, the rabbinic view of weed has been evolving. Orthodox rabbis in New York state recently approved the use of medical marijuana in the form of edibles.

Throughout the diaspora the Halakhic precept of dina d’malkhutah dina, the law of the land is the law, has been practiced for centuries. This is generally interpreted that Jews defer to the law of their country of residence. As legalization becomes the new normal, it is likely that Jewish authorities will come to defer to this new reality.
Claire does not expect rabbis and other traditional Jewish leaders to step up to the plate on this issue.

“While cannabis may be legal in Oregon, the rest of the country still has a long way to go,” she says. “Le’Or is beginning to work on a national level. We plan on being involved in legalization efforts nationally. … This is going to be a bottom-up effort.”