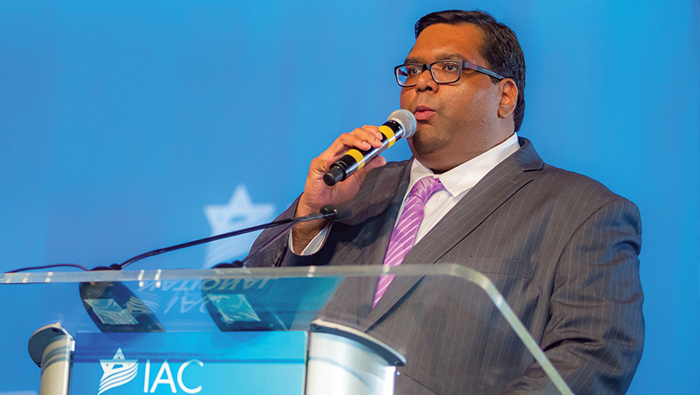 The son of immigrants from India, Milan Chatterjee grew up deeply immersed in Indian and Hindu culture. Though he became president of the UCLA Graduate Students Association, he was apolitical.

So when he was targeted by supporters of the Boycott, Divest, Sanction movement, he was very surprised but assumed the university would deal with it. When he was instead rebuked after a UCLA investigation, he became publically committed to opposing the BDS movement. He is now finishing his law degree at New York University.

In September, Milan was a featured speaker at the Israeli American Council’s national conference that attracted 2,100 activists and leaders. Among those leaders was Jewish Life Magazine’s Publisher Cindy Saltzman who recorded a video interview with Milan (an excerpt of the video is posted on azjewishlife.com). The following story is based on that interview.

Milan’s road to becoming an anti-BDS activist began in October of 2015 when a student group requested funds for a campus diversity event from the graduate student group Milan was president of. Since the BDS movement is extremely active on UCLA’s campus, Milan said some of his administration was concerned that topic would be part of the event.

When he received a letter a couple of weeks later from Palestinian groups and the ACLU “falsely accusing me of viewpoint discrimination, I was surprised but thought the University would address it.”

Instead, the letter was circulated on campus and a petition was started against Milan. Then one BDS activist called for “holy war against me and my administration.”

“We had to get campus security to come to our meetings,” says Milan. Though nothing happened, Milan said he felt he could be in physical danger because you don’t know where that kind of language can lead.

“I asked UCLA for help and support from this anti-Israel harassment,” he says.
Instead, UCLA launched a three-month investigation against Milan, but never investigated the BDS activists. “That is the double standard you see in terms of the administration’s handling of the BDS movement.”

“They returned a defamatory report saying I violated viewpoint neutrality in the allocation of student fees,” Milan says in a tone that still resonates with shock nearly a year later. “I was trying to be neutral.”

Milan and his attorneys now are attempting to have the report overturned.

“Seeing how the BDS activists want to destroy people’s reputations and their careers, and engage in smear campaigns, I don’t know how anyone can support the BDS movement,” says Milan, adding, “It also calls for the economic annihilation of Israel.”

He says he is most troubled by UCLA’s collusion with the BDS movement causing him to waste three months of his life and needing lawyers to defend himself. He says he is grateful for the support he has received from the Jewish community.

Those two diverse reactions have inspired him to become a very public anti-BDS activist.

“I feel a moral obligation to expose the BDS movement and administrations who collude with them,” he says. “It is a very dangerous movement … the tactics they use to advance it is malicious and affects the safety of students.”

“Since I had this experience and learned a lot, I feel I can help in overcoming it.”