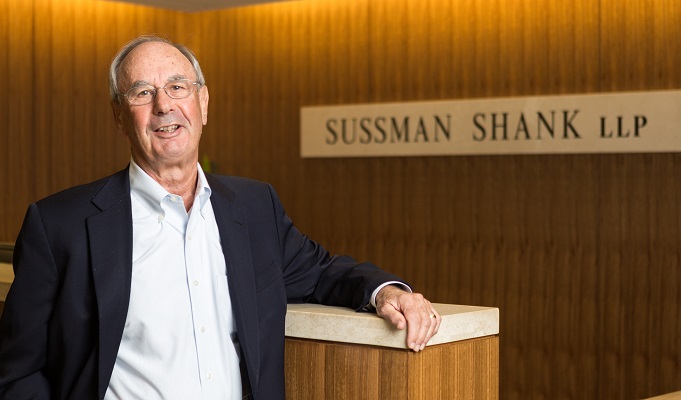 Born in Portland 77 years ago, Barry Caplan has been an attorney in his hometown for the past 53 years. Though the Jewish community and legal profession have changed dramatically in that time, he says that the core values of the legal firm where he has spent the past half century have remained constant.

When Barry graduated from law school in 1965, most of Portland’s large law firms generally were not hiring Jews. Barry spoke to the Sussman Shank team, but says they told him he needed experience.

“They were right,” says Barry, who joined the Multnomah County District Attorney’s office. “I got a lot of court experience and confidence.” After two and half years of being in court almost daily, Portland attorney Jake Tanzer, also Jewish, told Barry that Gil, Jerry and Norm were interested in talking to him again.

Since Barry joined the firm, it has grown to nearly 35 attorneys. It has also diversified from its Jewish roots. “Over time opportunities have changed,” says Barry. He credits early Jewish legal professionals including Federal Judge Gus Solomon and attorney Dick Brownstein, who was very active in the bar, with helping to open doors for Jews and other attorneys.

He recalls a conversation with Dick Brownstein, who helped lawyers of color and various ethnicities enter the profession. “He said, ‘Never forget how hard it was for us.’ ”

“Now we have diversity in the firm, and I’m proud of that,” says Barry.

At his 50th anniversary celebration he received a compliment that meant a lot to him. As the firm’s first managing partner from 1980 to 1986, Barry had hired a young mother. When the woman had her second child, Barry arranged for her to work half-time after her maternity leave. Though she has moved on from the firm, she returned for Barry’s celebration. “She told me, ‘You were so far ahead of others and kind enough to understand the plight of a young woman being a lawyer and a mother.’ ”

Barry looks back to the ’80s as a heyday of openness and expansion in the legal community. Sussman Shank grew from eight attorneys to 22 during that decade. Big firms across the city were expanding rapidly. Cases were becoming more complex, and technology and paralegals contributed to the growth. Young Jewish lawyers were being accepted by large firms.

Since the recession of 2008, Barry says young attorneys of all colors and ethnicities are once again struggling to find a first job.

“All are treated the same, but it’s not easy for any young attorney to get a job,” says Barry. “For people who want to work hard and set their vision, there are opportunities, but it takes patience.”

Barry also has seen changes in Portland’s Jewish community. He says when he grew up there were only three to five congregations in the city; now the greater metro area boasts more than 20.

Just months after the arrival of Rabbi Joshua Stampfer, Barry became a bar mitzvah at Congregation Ahavai Sholom, which later merged with Neveh Zedek to become Neveh Shalom.
“Barbara and I are crazy about him,” says Barry. “He just gets better with age like good wine.”

Barry’s wife, Barbara, was raised at Temple Beth Israel, and the couple married there.

When Barry joined Sussman Shank, the partners were all active in the Jewish community and encouraged him to do the same. Gil Sussman and Jerry Shank were both involved at temple, and Norm Wapnick was president of Neveh Shalom. Barry and Barbara joined Beth Israel and taught in the Sunday school in the 1960s. Barry joined the social action committee at temple and was soon asked to join the board; he served on the board from 1972 to 1978. As chair of the social action committee, he also became involved with the Community Relations Council at the Jewish Federation of Greater Portland. He went on to chair the CRC and then served on the federation board for six years in the 1990s, including two years as vice president. He and Barbara co-chaired the federation gala two years. The whole family volunteered for federation’s special 40th anniversary celebration of the movie “Exodus” presented at the Arlene Schnitzer Concert Hall in 2001.

The couple’s son, Jon, and wife, Michelle, are active at Neveh Shalom, where their children Jennifer, 18, and Andrew, 15, became b’nai mitzvah. Their daughter, Lisa, and husband, Thaddeus Girard, belong to Beth Israel where their children, Presley, 13, became a bat mitzvah, and Brady, 10, is studying for his bar mitzvah.

Barry’s social action interests also led him to co-chair with Laurie Rogoway the Portland march in support of freedom for the Soviet Jews in the 1970s. When Laurie became the director of Oregon’s American Jewish Committee, Barry also became involved there. He served on the board for three years and represented the AJC before the Portland School Board on the Equal Access Act regarding prayer and after-school clubs. He also represented the AJC in issues regarding the menorah in Pioneer Square.

Barry expanded his social justice issues again in the 21st century. For the past dozen years, he has been involved in the Campaign for Equal Justice. He serves on the advisory committee for the group, which “helps legal aid serve people with the most critical legal needs – food, shelter, medical care, income maintenance and physical safety.”

“I’ve been very fortunate in life, but many Oregonians have not,” said Barry in an interview with Oregon Business Magazine in April. “For those with legal problems they can’t afford, CEJ believes that giving them access to justice is a right, not a privilege. … (I) give time and money to help support this legal right for people.”

Just as the legal profession has become more open to diversity, so has society in general.

“When I started, there were lots of clubs and places where we were not accepted or not comfortable,” says Barry, noting that now Jews can feel content to be who they are here.

As opportunities have expanded, Barry says he has followed his interests to become involved beyond the Jewish community.

“I never got less interested in the Jewish community, but I also got involved in other things such as equal justice,” says Barry. “I didn’t shut anything out, but I couldn’t find time for everything.”

'Barry Caplan: The staying power of values' has no comments