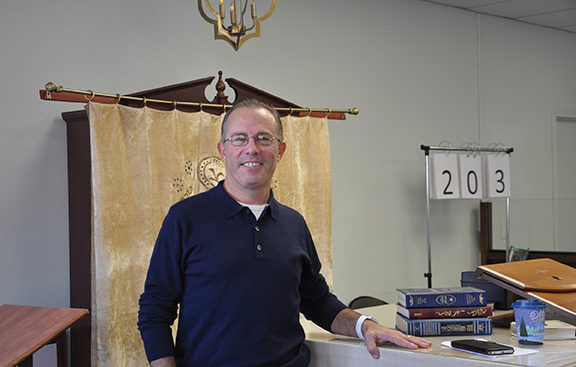 The congregation was founded in 1910 by Jews arriving from Turkey and the Isle of Rhodes. After being forced to relocate by urban renewal, the congregation dedicated its Byzantine-inspired synagogue on Barbur Boulevard in 1965.
The red-roofed “beehive” is a well-known landmark sitting under the aerial tram between Marquam Hill and the South Waterfront.
Now shifts in Portland’s Jewish population have inspired another move. For several years, the congregation has considered selling the synagogue on Barbur Boulevard to move to the Hillsdale building where it holds Shabbat services.
With Rabbi Michael Kaplan’s recent announcement of his family’s intent to make aliyah in June and four-term president Charles Levy’s announcement that his family is moving to Hong Kong for two years, the congregation is looking for new leadership. The third development is the first Jewish heritage tour to Morocco being organized by the Sephardic Cultural Center of Oregon, which was founded on the congregation’s 100th anniversary. Charles, a native of Morocco, will lead the 14-day tour of discovery April 11 to 25.
“Our small but mighty community is changing,” says Charles. “We have a core of Sephardic people who want to preserve their culture.” The four-term president plans to stay involved with the congregation’s transition via phone and frequent trips, even after his family’s move to Hong Kong this summer, where his wife, Jo, will serve as an Intel vice president for two years. He says he hopes most of the decisions regarding the building will be completed before his departure.
“On Dec. 6 we had our annual membership meeting in which we made a presentation to our members about the status of the sale of our Barbur Boulevard synagogue building and some preliminary plans for our future,” says Charles. “We received a purchase offer from a government entity that also includes a generous relocation package, and we are in the process of negotiating the final details.” The proposed sale includes an option for the congregation to use the Barbur building for the next couple of years as the Hillsdale location is remodeled and expanded to include a sanctuary. Charles says the Ahavath Achim board will update members and the public with more details after the sale has closed.
Over the next few months, Charles says he and the board will meet with Ahavath Achim members and others interested in a Sephardic future to determine what needs need to be met in the new sanctuary and in the leadership. Many of those who want to attend services at a Sephardic synagogue now live in Southwest Portland, so Hillsdale is more accessible by foot than Barbur.
In terms of building needs, Charles says, “We’ve been trying to find the best avenue for our community to keep our synagogue and Sephardic Cultural Center running for the next 100 years.” Charles says that a primary consideration is making the congregation self-sustaining with income beyond that from the congregation’s small membership. Current tenants of the Hillsdale building are the Jewish Federation of Greater Portland, the Portland Kollel and the Everything Jewish store.
Plans are to maintain the rental space and find ways to expand the congregation’s small space there to include a sanctuary that can seat about 70 people and a small kitchen and dining area.
“We want to be nimble,” says Charles.
Many Ahavath Achim members also belong to a second (predominantly Ashkenazi) synagogue and send their children to religious school there.
“We are everywhere – Neveh Shalom, Beth Israel, Havurah, Shaarie Torah,” says Charles, who also belongs to Neveh Shalom and serves on the board of the Jewish Federation. He encourages others to come and listen to Neveh’s new cantor, Eyal Bitton, who has a Sephardic heritage and incorporates some melodies familiar to Ahavath Achim members.
New leadership might be another rabbi, a hazzan and/or an executive director to run programs.
“I believe we need somebody who is going to come make Ahavath Achim their home,” he says, adding member input is being gathered to determine what a new leader needs to provide.
Charles says he believes maintaining a Sephardic minyan and offering cultural programming to maintain the Sephardic culture need to be key priorities.
The Sephardic Cultural Center hosts an annual film series from November through April to share Sephardic stories and issues with the entire community. It also collaborates with other organizations to present educational programs of Sephardic interest. And this April, the center is organizing a Jewish heritage tour of Morocco. The country, where Muslims and Jews have long lived together in peace, is a popular destination for Israelis, with about 50,000 visiting each year.
Charles was born in Essaouira, Morocco, where he attended yeshiva and became a leader of the Moroccan Jewish Boy Scouts. He moved to Israel at age 17 for college and then moved to San Francisco, where he founded several entrepreneurial businesses. When Charles and Jo decided they wanted to live in a smaller community to raise their children, Jo Levy transferred to Intel’s Oregon headquarters in 2005. The couple took the four youngest of their five children to Morocco for a vacation last year.
Now Charles is looking forward to sharing those same sights with his Portland community in April. He also plans to offer future Jewish heritage tours to Morocco from the United States, and while in Hong Kong he will promote tours to Morocco, which recently waived visa requirements for China.
For more information on the tour or Ahavath Achim leadership and building plans, contact board member Richard Matza at 503-318-3732 or Charles at 415-235-5491.
Charles Levy’s family visited Morocco last year. In April he will lead a Jewish heritage tour of his native land for the Sephardic Cultural Center of Oregon.
LivingJ