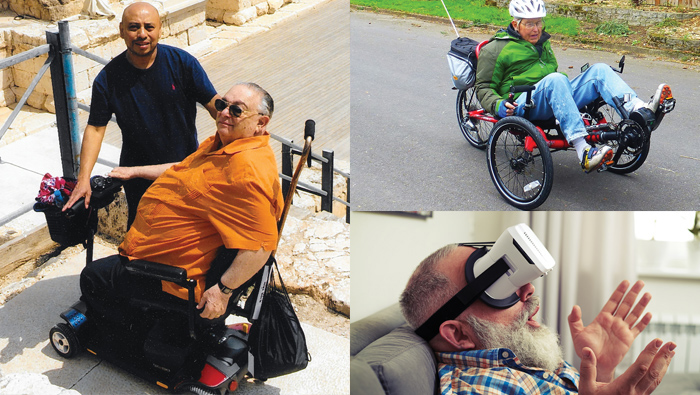 Three years ago my father-in-law, now 96, traded his bicycle for a recumbent trike. Freed from the fear of falling and breaking a hip or shoulder as he had seen friends do, he continued his cycling adventures.

But the heavier cycle and different muscles needed to pedal made climbing hills a slow, tiring process. Concerned he wouldn’t have the energy to make it home, Dad planned routes with fewer hills. Then, last year, he decided to buy a motor for his trike. It doesn’t run all the time, but he can push a button and get an assist on climbs. He returned to many of his favorite rides. The world was once again open before him.

There’s no denying that as we age, our brains and bodies change. But thanks to technology and revolutionary ways of thinking, we can now enjoy a rich life well into our golden years.

That’s especially important given the growth of our senior population. The 2010 U.S. Census found more than 40.3 million people aged 65 and older, with the 85+ the most rapidly growing age group.

Maintaining mobility is an important part of retaining independence.

From canes to mountain trikes, finding ways to stay on the go has gotten easier in recent years.

As Dad discovered, even active seniors can benefit from getting creative to extend their mobility. A 2011 AARP article on the increasing popularity of recumbent trikes listed advantages including stability, comfort, cardiovascular benefits, adaptability for riders with disabilities and a view of the landscape instead of the road.

For those who rely on their upper body strength to get around, there are options for them to enjoy the outdoors, too. Mountain Trikes, an all-terrain, self-propelled wheelchair, is perfect for exploring the outdoors, from muddy trails to the beach, or as the name implies climbing mountains.

Scooters have also grown in popularity.

“Families bring in a senior to look at scooters, and the grumpy senior sees it as being stuck, as losing independence,” says Christina Forlenza, manager of All In One Mobility. “While they are here, they realize this is a move to more independence. Soon they are riding around doing what they want to do.”

Phoenix Barrow, life enrichment manager at Rose Schnitzer Manor, says scooters are in wide use around the Cedar Sinai Park campus, allowing residents to travel further than they could in a wheelchair.

RSM resident Shelly Petcher, 81, goes further than most – he has used his scooter on visit to Israel twice, Japan, the Baltic countries, Scandinavia and Russia. In mid-April he headed off on a cruise to Central America with stops in Belize, Mexico and Honduras, followed by a week in New Orleans.

“The only place I got stuck was in the Hermitage in Russia,” he says. Stopped at the base of a stairway with no elevator around, he got moving again when two American tourists picked up his scooter and carried it up the stairs. “I can go anywhere I want to go except stairs.”

“The scooter is what enables me to go on these trips,” Shelly says. “A walker could do it, but I run out of energy.”

When he’s home at RSM, he uses a walker in his apartment, but hops on his scooter to get around campus.

According to a 2013 report from the University of California Disability Statistics Center, Shelly is not alone: “Just over 6.8 million community-resident Americans use assistive devices to help them with mobility. This group comprises 1.7 million wheelchair or scooter riders and 6.1 million users of other mobility devices, such as canes, crutches and walkers.”

Even walkers have advanced in recent years.

“They are more tailored to the individual now,” says Phoenix. “There used to be one model. Now some have reverse brakes, which are good for residents with Parkinson’s. You squeeze the brake as you walk and release to brake.”

A couple months ago I saw the futuristic play “Marjorie Prime,” which explored the intersection of science and aging. It was a deeply thought-provoking play. The technology in the play, an artificial version of Marjorie’s late husband who helps her grapple with memory loss and loneliness, clearly does not exist – yet.

On a much simpler level, smart speakers and personal assistants such as Amazon Echo and Alexa can provide interaction and memory aids to seniors.

While screen interaction is often considered detrimental to in-person social interaction among children and teens, the use of social media and the internet seems to have the opposite effect on seniors.
A 2013 Pew Research Study on internet use reported:

“… Among older adults who go online but do not use social networking sites, that figure is 71%; and for those who are not online at all, it is 63%.”

Kristi Ferris, the administrative assistant at NW Place, offers technical support once a week. She helps residents set up their portable devices, create email accounts and download apps. Uber, Lyft and Facebook are the most common apps that residents want, she says. She also helps residents retrieve and save videos and photos that relatives have emailed to them. A grandson of one resident comes once a month to help with some of the technical issues that Kristi can’t solve.

West Hills Village also offers weekly help. “Every Monday is electronics assistance day,” says sales and marketing manager Sean Proper. Staff help residents who are having trouble navigating the digital world. He says most seniors use technology for communication. “They use FaceTime and Skype to see loved ones in different parts of the country.”

Technology also provides “armchair travel experiences” for seniors. CSP has a green screen where groups of up to 20 residents can participate in interactive visits to museums, castles and other far-flung places. “They can connect with a docent via green screen,” says Phoenix. “It’s similar to Skype, you see the person on screen but see the exhibit in the background. The docent can go through and discuss each piece of art, and we can ask questions in real time.”

“It’s a low-impact way for seniors to enjoy participating in tennis and bowling,” she says.

A 2015 blog post from McMaster University found that virtual reality gaming systems like the Nintendo Wii provide both entertainment and opportunities for physical activity. The post noted that evidence from research studies shows that Wii-based training is comparable to other exercise programs for improving balance in older adults, which can reduce the risk of falling.

There’s no question that technology is changing how we age. Being willing to adapt and use technology creatively helps us hold onto the passions, activities and connections that make us who we are.