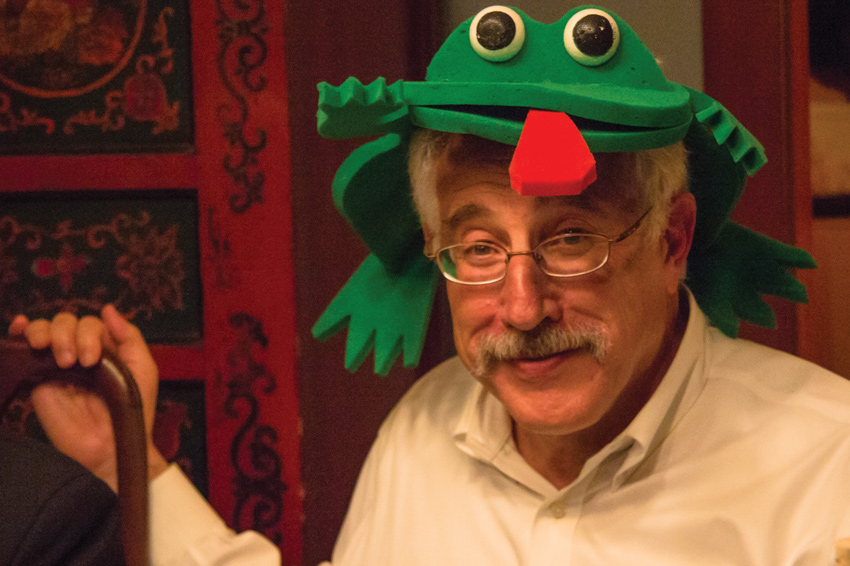 “A haimisher mensch means someone with whom you can take your shoes off, or let your hair down.”
~ Leo Rosten, The Joys of Yiddish

If Rabbi Daniel Isaak had to pick one word to describe his tenure at Congregation Neveh Shalom, it would be “haimish.”

The Yiddish word means informal, cozy, warm. Having the friendly characteristics, or kind of rapport, as writer Leo Rosten explains, that exist inside a happy home.

And that is the atmosphere that Rabbi Isaak has fostered during his 22 years with the congregation.

“I wanted Neveh Shalom to become the ‘haimeshest’ shul – if that’s even a word,” he said in a recent interview. “To increase the sense of community – that we are here for each other, for the good times and the bad.”

On June 30, Isaak will retire from official duties at Oregon’s largest Conservative congregation and will step into the role of rabbi emeritus. But he will continue to look for ways to strengthen the congregation and community he and his wife, Carol, have embraced.

“I’ve learned things from Rabbi Stampfer about how to be the ‘retired rabbi,’ ” he says, referring to Rabbi Joshua Stampfer, who had been the spiritual leader of Neveh Shalom for 40 years before stepping down in 1993. “I’m hoping that I and my successor will be able to develop as supportive a relationship as Rabbi Stampfer and I have had.”

The congregation is honoring Rabbi Isaak’s service to the congregation and community May 15-16 with a full weekend of activities, including Friday and Saturday religious services and a Saturday night “dinner and frivolity.” On Sunday, May 17, Rabbi Isaak will officiate a group Jewish wedding ceremony for congregants who may not have had an opportunity for a religious ceremony.

“He is a people person,” says Priscilla Kostiner, who, with her husband, Tony, has been a member of Neveh Shalom for more than four decades. “He embraces all ages and all people who come into the shul.”

“He’s a mensch,” says Rich Meyer, 49, Neveh Shalom’s president and a lifelong member of the congregation. “He is generous, progressive – and a real Torah scholar. I’m always amazed at how he can pull out meaningful stories from the Torah.”

“He has always been open to new ideas,” says State Sen. Elizabeth Steiner Hayward, D-Portland, “especially as the kehillah has grown and become even more diverse and members have needed different services – both in terms of tefillah and in terms of affinity groups.”

Some speak of his role as the “lollipop man,” distributing candy to children, and sometimes adults, during the course of Shabbat services. Or his creative Purim costumes. Or how he’ll end High Holiday services with a joke, to set a lighter tone.

“His greatest legacy,” says Meyer, “is that he’s empowered our members to take the shul in directions they want to go. He’s made it possible for everyone to worship in ways that interest them and still be part of a larger community.”

Daniel Isaak didn’t start out to be a rabbi.

The son of German refugees, he grew up in San Francisco and graduated in 1971 from the University of California at Berkeley with a double major in linguistics and Near Eastern languages. He thought he might pursue a career in either psychology or psychiatry.

“It was a wild time at Berkeley,” he says, remembering political demonstrations and a class he took from Black Panther Eldridge Cleaver. But he’d also spent his junior year in Israel, was a counselor at Camp Ramah and had a close relationship with the rabbi of his Conservative shul.

“I liked the things he was engaged in – in people’s lives, in their celebrations and crises,” he recalls. “It was attractive to be involved.”

By September 1971, he was enrolled at the Jewish Theological Seminary in New York City, graduating in 1976. He met Carol there – their first date was at a protest of Richard Nixon’s second inaugural. They married in 1974 and then served congregations in Hackensack, NJ, and Briarcliff Manor, NY, before returning to the West Coast – and becoming a part of Neveh Shalom.

“I came to a large congregation to succeed a much-revered rabbi, who had served the congregation for 40 years,” Rabbi Isaak wrote in his official biography. “It was a daunting undertaking.”

But Neveh Shalom felt that the Isaaks were a good match for the growing congregation – and the Isaaks agreed.

“He is a risk taker,” she adds. “He’s not afraid to take a position that might be controversial. He’s curious. He’s always looking to learn.”

When he came to Neveh Shalom, one of Rabbi Isaak’s first steps was to physically bridge the gap between the pulpit and the congregation: He asked the congregation to lower the bimah, began using a portable microphone so he could walk among worshippers during his d’var Torahs and strove to create dialogues rather than deliver a speech.

“I wanted to start a conversation,” he says. He also encouraged congregants to take leadership roles in services, began weekly emails to share his thoughts on a variety of topics and asked congregants to share their thoughts and experiences about Judaism and faith.

The latter led to publication of two booklets, “This I Believe,” in 2010, and “Why Be Jewish” (nevehshalom.org/flyers/whybejewish.pdf), published during this year’s High Holy Days. And now, the congregation is assembling reflections from members about their relationship with Rabbi and Carol Isaak and their family for a special retirement tribute.

“Rabbi and man, rabbi and friend, religious leader and private citizen, the role of a rabbi serves many purposes for many people,” Barry Horowitz wrote of his family’s relationship with Rabbi Isaak. “All four of our boys and their wives have enormous respect and regard for him as a religious leader and a man.”

“He is really involved with people, and has endeared himself to so many in the community,” Rabbi Stampfer says of Isaak. “He is very devoted to the congregation, and to every congregant.”

Rabbi Isaak worked with the congregation to reach out to interfaith families and gay Jews, and engaged members in a round of discussions that ultimately led to his decision, following one of the options presented by the Rabbinical Assembly, the organization of Conservative rabbis, to officiate at same-sex weddings.

“It was an excellent model of how a good rabbi combines being a Mara d’Atra (the local authority) and teacher,” Steiner Hayward says.

In addition to his focus within the congregation, Rabbi Isaak has been deeply involved in the larger Jewish community and the greater Portland community. He’s twice been president of the Oregon Board of Rabbis, teaches in its Introduction to Judaism course and helped initiate an inter-congregational Selichot service and the Teen-Israel scholarship program that sends qualified high school students for a summer in Israel.

He’s also taught various classes in the community and speaks to church groups, high schools and colleges on topics of Jewish identity, thought and culture. He participates in a Jewish-Catholic discussion group, works with Ecumenical Ministries of Oregon on issues of common concern and, together with Rabbi Joey Wolf of Havurah Shalom, organized a Jewish-Muslim dialogue group.

In retirement, he expects to expand his involvement with the Oregon Food Bank, where he’s a member of the executive committee as well as serving on the board of directors. And he also is looking forward to taking some classes at Reed College or Portland State University.

“He shouldn’t worry about time hanging on his hands,” Rabbi Stampfer advises. “There are constant needs in every Jewish community – I’ve found myself at least as busy in retirement as before.”
Rabbi Isaak is grateful to Neveh Shalom’s board and membership for their support in a number of endeavors, from anti-hunger programs such as the Heifer Project International to congregational trips to Israel to his recent attendance at the J Street national conference.

“People have been respectful of the way I feel I need to support Israel,” he says.
He’s seen – and in some cases helped shape – what he calls “positive and wonderful changes in this evolving community,” yet notes there are also significant challenges for American Jewish life.

“We are, as a community, engaged with both centrifugal and centripetal forces,” he says. “How broad can we make the center, so that fewer are spun away – but how broad is too broad?”

He mentions feeling “heartbreak” when officiating at funerals of congregants at which none of the descendants identify as Jewish. And concerns, faced by all congregations, about attracting and retaining members.

Still, Rabbi Isaak’s optimism about Neveh Shalom’s future, and the strength of its 850 or so families, is evident in his advice to his (still to be determined) successor:
Smile. Be enthusiastic. Don’t get frustrated. Allow for failure. Trust the congregation. Sometimes you may have to say ‘No,’ but if the answer can be ‘Yes,’ say ‘Yes’ as much as possible.

As he looks back on his career as a congregational rabbi, he recalls a conversation with one of his children, a financial advisor in the New York City area, who said he didn’t know anyone who was excited to go to work in the morning.

And perhaps that is the greatest tribute to him – and to his congregation.