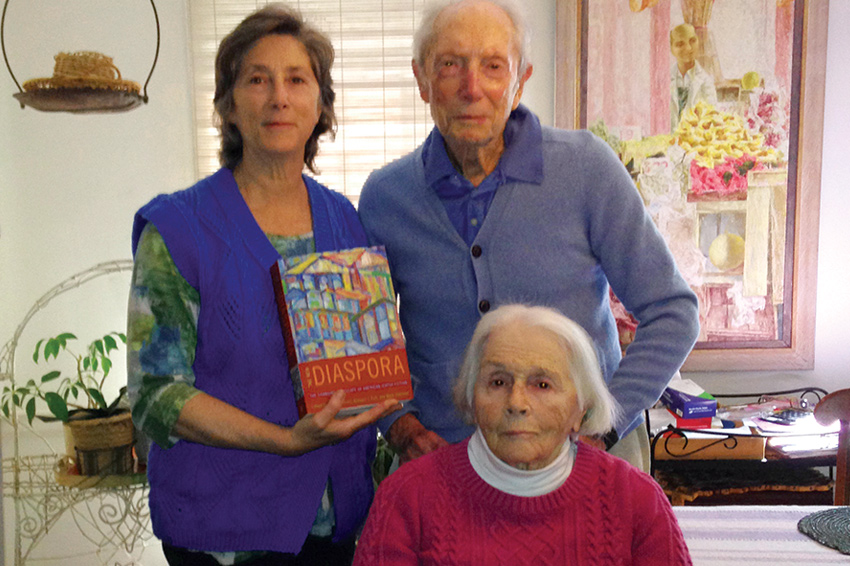 Roseburg artist Marjorie Feldman flew home to Hartford, CT, to visit her parents and to attend the annual presentation of the Edward Lewis Wallant Award. For more  than 50 years, the award has honored the memory of the author of The Pawnbroker and other works by selecting a promising Jewish writer as its recipient. An anthology about the award called The New Diaspora: The Changing Landscape of American Jewish Fiction has just been released. The hefty volume tells the history of the award and is filled with excerpts from the writing of Wallant Award winners and other significant Jewish writers.

For almost 30 years, the award has been managed by the Maurice Greenberg Center for Judaic Studies at the University of Hartford, and the students there have unique opportunities to interact with the authors who convene for the annual event. But it wasn’t always this way. The explanation for this is also the back story of why Marjorie Feldman was an honored guest at the dinner and the ceremony.

It was Marjorie’s mom, Fran Waltman, now 93, who created the award 53 years ago. When Marjorie was still in grade school, her mother started a book club to explore American Jewish literature, including, among other works, Wallant’s The Pawnbroker. Fran was so shocked by Wallant’s premature death at the age of 36 that she convinced Emanuel Synagogue in West Hartford to dedicate a shelf in its library in his name. Each year, on Wallant’s yahrzeit, the library would purchase a “singular book of fiction” by an American Jewish writer. The authors, they decided, would be relatively unknown yet would be “worthy of being placed on this particular shelf,” according to the authors of The New Diaspora. The award quickly became a prestigious honor. The book itself is dedicated to Marjorie’s parents and features one of Marjorie’s paintings on its cover.

From the beginning, and for many years, the awards dinner was at Marjorie’s parents’ dining room table, with food made from scratch by her mom.

“We had creative people around us all the time,” Marjorie remembers. “Sometimes we were awestruck by the celebrities – Isaac Bashevis Singer, Chaim Potok, Elie Wiesel – but they sat at our table, and it became a familiar thing. It was a ‘salon’ of sorts.” The dinner table discussions were, as you might imagine, memorable. And, she says, “It created an environment where personal expression and creativity were valued.” To wit, Marjorie’s younger brother is a graphic artist, designer and actor, and Marjorie is an accomplished painter.

The Wallant Award has significance for the literary world in general as well as for the Jewish community itself. Ehud Havazelet is professor of creative writing at the University of Oregon, and he won the Wallant Award in 2007 for his novel, Bearing the Body.

“It’s important that it focuses on Jewish writers who, at the time, are not fully well known by the outside world. It is attention that might draw more readers to them,” says Professor Havazelet. “There is also good in looking beyond the fact that these are Jewish writers, to show the world that these are interesting writers who happen to be Jewish.” He also observes, “This award goes back 50 years and gives people looking for Jewish writers many to explore and can then lead them to other writers. The list becomes a resource.”
Book club members take note! The list is included in the book or can be found online (uhaweb.hartford.edu/greenberg-center/wallant.html)

Marjorie herself is continuing in her mother’s footsteps. Andrew Apter, the art director at the Umpqua Valley Art Center, asked the Umpqua Valley Havurah if they would like to cosponsor an April event that would bring author Elyce Wakerman (A Tale of Two Citizens) to speak in Roseburg. Marjorie, a member of Havurah, said, “Absolutely.”

“Book events are precious to me. I love to hear writers speak about their process and tell their stories.” The event was a big success. And of course Elyce and her husband, Jeff, ended up at Marjorie’s for dinner.

“A writer is here in our community, you host them.”
Liz Rabiner Lippoff is a marketing consultant, freelance writer and community volunteer. LizInk.biz