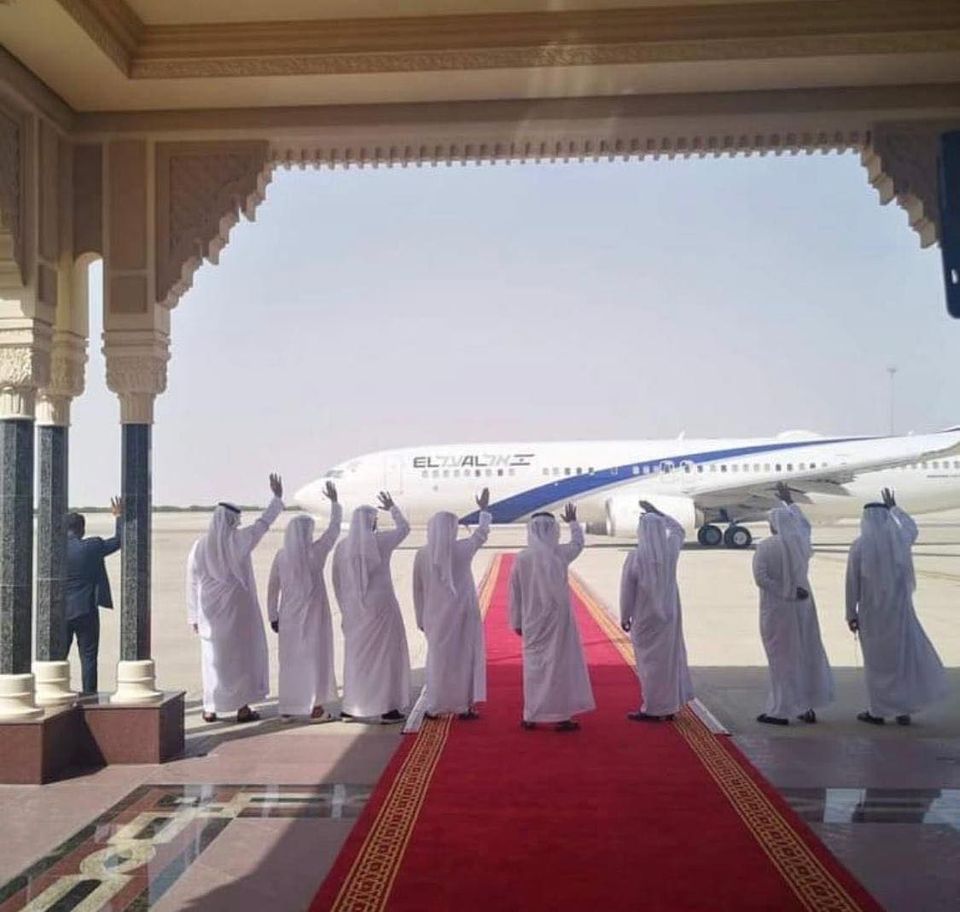 Photo: UAE delegates wave to the departing El Al plane at the end of the Israel-UAE normalization talks, with the US, in Abu Dhabi, September 1, 2020 (El Al spokesperson’s office)

ABU DHABI, United Arab Emirates (AP) — From the Israeli captain’s emotional greeting in Arabic upon takeoff in Tel Aviv, to the warm Emirati reception on the ground in scorching Abu Dhabi, it was obvious this was no typical flight.

The journey was steeped in symbolism. U.S. and Israeli flags adorned the tarmac at Ben-Gurion Airport as Israeli music played, and the word “peace” was emblazoned in English, Hebrew and Arabic above the cockpit window of the Boeing 737. On board, the “Making History” motto featured prominently on each seat’s headrest covering and complimentary fabric bags of the “Abraham Accord Inaugural Flight” were distributed.

A special menu was prepared, highlighting touches of Middle Eastern cuisine, and the director-general of Israel’s Health Ministry even handed out a limited-edition face-mask featuring the Israeli and Emirati flags. The American diplomats on board sported a tri-country face mask amid the coronavirus pandemic.

“While this is a historic flight, we hope it will start an even more historic journey for the Middle East and beyond,” he said. “This is a very hopeful time and I believe that so much peace and prosperity is possible in the region and across the world.”

But only after takeoff did that take on concrete significance, as the El Al aircraft veered east toward the desert terrain rather than west over the Mediterranean Sea as it does on nearly all its outbound flights. Pilot Tal Becker proudly announced the historic moment when the El Al aircraft crossed into Saudi airspace for the first time ever, noting that the flight would now take “just” three hours and 20 minutes to Abu Dhabi, rather than the more than seven hours it would have taken to circumvent the Arabian Peninsula.

Kushner visited the traveling press corps in the back of the plane while over Saudi airspace to say it was “gracious” of the kingdom to make such an extraordinary gesture, and Prime Minister Benjamin Netanyahu delivered a recorded in-flight address over the loudspeaker noting so as well.

By granting Israel access, Saudi Arabia gave a strong indication of its approval of the newfound normalization with Israel and raised hopes it could be next to take its covert relations with Israel up a notch.

“We are all excited and look forward to more historic flights that will take us to other capital cities in the region, advancing us all to a bold, prosperous future,” Becker said over the loudspeaker system. “Wishing us all salaam, peace and shalom.”

Cognizant that that moment has yet to arrive, El Al official Stanley Morais noted that the 737, with its built-in anti-missile defense system, was required for the route for security reasons.

The flight itself caps weeks of a quickly warming relationship since the surprise Aug. 13 White House announcement establishing ties. In just over two weeks, telephone lines were connected between the countries, the UAE’s ruler issued a decree formally ending the country’s decades-long boycott of Israel and several Israeli companies have already signed business deals with Emirati counterparts.

The Israeli delegation was led by national security adviser Meir Ben-Shabbat, who spoke in Arabic upon arrival. It included the director generals of several government ministries who hoped to establish a rapport with their Emirati counterparts on issues of diplomacy, trade, science, technology and cooperation in countering the coronavirus pandemic during the short two-day visit.

For the Palestinians, the day was also symbolic — and painful. The Palestinians have long counted on the Arab consensus that normalization with Israel could come only after a Palestinian state is established. They have condemned the UAE’s move toward Israel as treacherous.

Palestinian Prime Minister Mohammad Shtayyeh said “it hurts us very much” to see the Israeli plane landing in the UAE. He noted that the plane was called “Kiryat Gat,” a southern Israeli town built where Arab villages once stood before the war surrounding Israel’s establishment in 1948.

“We would have liked to have an Emirati plane landing in liberated Jerusalem, but we live in a difficult Arab era,” Shtayyeh said.

While the Palestinians have cut off ties with the U.S., Kushner said the U.S. and the “whole region” is ready to help them. “But they can’t be stuck in the past. They have to come to the table,” he said.

For veteran El Al purser Hedva Opatovsky, the flight marked a fitting final journey for her 46 years of air travel. After thousands of flights to dozens of countries, she was put on leave several months ago as El Al grounded its fleet due to the sudden virus-related downturn in air travel and had thought her career had come to an inauspicious end. Instead, the 67-year-old Opatovsky, who flew with Israeli prime ministers dating back to Menachem Begin and used to work the Tehran route before the 1979 Islamic Revolution, got one last trip to Abu Dhabi.

“This journey has personal and national significance for me,” she said, as she strolled the aisle. “It’s very exciting and it feels good to finish with a sense of hope.”