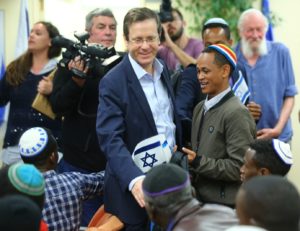 After years of waiting, the dream of Aliyah has come true for 83 Ethiopian immigrants (Olim) who landed at Ben Gurion Airport Monday, Feb. 4. This is the first group of immigrants to come from Ethiopia following the Israeli government’s decision last October to bring 1,000 members of the Falashmura community who already have first degree relatives living in Israel.

Upon the flight’s arrival, a reception was held at Ben Gurion Airport in the presence of Chairman of The Jewish Agency for Israel, Isaac Herzog, who welcomed the new immigrants. At the end of the absorption process on site, the new Olim then had a joyful reunion with their close family members who were on hand to reunite with them as they begin their new lives in Israel together.

“The Operation Yehudith campaign to bring Ethiopian Jews to Israel is a very moving moment, and all of Israel welcomes you. I call upon the Israeli government to do everything in its power to bring the rest of the Ethiopian Jews waiting to come to Israel and who are praying to Jerusalem everyday,” said The Jewish Agency for Israel Chairman, Isaac Herzog. “The Jewish Agency will absorb, assist and accompany you for the next two years in everything that is needed in order to be able to successfully integrate into Israeli society, to build your home, your future, and the future of your family here in Israel.”

In November 2015, the Israeli government passed a decision to allow family reunification for the remaining 9,000 Falashmura community members waiting for Aliyah to Israel. By the end of 2017, about 1,300 had been approved and immigrated, and approximately 8,000 remained in Ethiopia. In October 2018, the government decided to bring another 1,000 members of the community who already had close relatives living in Israel.

After the festivities at the airport, the new Olim traveled to absorption centers across the country operated by The Jewish Agency, with the assistance of the Ministry of Aliyah and Integration. New Olim can reside for up to two years in dedicated absorption centers, where educational programs help both children and adults learn Hebrew and start acclimating to life in Israel.

Since the early 1950s, The Jewish Agency has assisted more than 90,000 Ethiopians with their immigration to Israel. The IDF and Mossad began bringing Ethiopian Jews to safety in Israel, and The Jewish Agency welcomed and absorbed the refugees, housing them in youth villages and special sites established for this purpose. The two most famous airlifts from Ethiopia to Israel were Operation Moses in 1984-1985, aiding the arrival of 6,364 Olim, and Operation Solomon in 1991, bringing 14,000 immigrants.

Since 1929, The Jewish Agency for Israel has been working to secure a vibrant Jewish future. The Jewish Agency continues to be the Jewish world’s first responder, prepared to address emergencies in Israel, and to rescue Jews from countries where they are at risk.

'83 Ethiopian immigrants reunite with family in Israel' has no comments