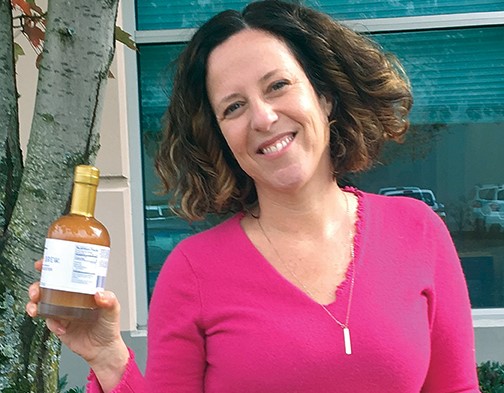 Fire Brew founder Valerie Roth drew on her interest in holistic nutrition to create a concentrated, shot-based health tonic. What began as offering samples at a local farmers market now has garnered national attention, including a mention in Sunset Magazine.

“You drink a shot of Fire Brew a day,” says Valerie. “You add it to a smoothie, tea, seltzer water or even a salad. You’ve got to get a tablespoon a day!” The following Q&A with Valerie has been lightly edited for clarity and brevity.

What led you to produce Fire Brew?

I always knew I was an entrepreneur but was plagued trying to find the right thing that resonated with me and would motivate me to go the distance. It wasn’t until I went back to school about five years ago to become a holistic nutritionist that I realized I could fulfill what had been in my mind’s eye for decades. A classmate turned me onto this fiery health tonic called “fire cider,” which home brewers had been making since the ’70s. It was hot and spicy and sort of jarring to the palate the first time I had it, but I was told how good it would be for me. I was intrigued. Well, after a few days (and then weeks) I still found myself thinking about it. I decided I would test my version at a farmers market I was volunteering at. People liked it. I just decided it was now or never in terms of giving it a go.

There are a lot of health drinks on the market. How does yours stand out?

First off, it’s not a drink. It’s a concentrated, shot-based health tonic. Think of it more as an all-natural, liquid vitamin that you should take every day by the tablespoon. Second, the amount of nutrient-dense ingredients in Fire Brew is awesome.

We literally pack it with fresh vegetables, fruits, herbs and spices that heal your gut, stave off inflammation and keep your system running at its optimal level. Third, it’s just flat out fun and crazy. Everyone should give it a go at least once and see for themselves. Warning, it’s very spicy (which is part of the “fun” factor).

What will people discover if they take Fire Brew religiously?

If people take Fire Brew consistently, they will come to appreciate that they can stay healthy naturally without taking tons of pills and medications. So much of what we need, we can get straight from our food, provided it’s clean and nutritious.

Why not choose to go this route and try to stay healthy proactively rather than panic once things start to flare and then reach for the quick fix? Fire Brew can help ward off the onset of problems like joint pain, congestion, digestive issues and more.

All it takes is a tablespoon a day.

How did you start producing Fire Brew?

When I first started producing Fire Brew, I was making it in my home kitchen. It was sort of novel at first, until it completely took over every inch of my entire house! By the time I moved into a commercial kitchen, my entire family and I were literally swimming in Fire Brew 24 hours a day, seven days a week. It got to the point where my kids were embarrassed to have any of their friends ride in my car or come over to our house because everything, and I mean everything, smelled like vinegar! How does your brew differ from Kombucha?

Kombucha is amazing and I drink it all the time. Ours is a shot-based health tonic filled with a ton of very dense, nutritious vegetables, fruits, herbs and spices steeped in an apple cider vinegar base for more than a month. It’s something you sort of “get through.” Think of it more as your daily vitamin than a drink.

Did getting written up in Sunset Magazine affect your sales?

That was amazing! I’m not sure how much it helped sales, but it definitely didn’t hurt! More than our sales going through the roof, what it did was validate that we have a product that is very timely, tasty and attractive enough to be in a major publication.

Can you remember mitzvah moments with your brew?

The best part is turning a skeptic into a believer. And that happens all the time. So many people have come up to us and told us how much Fire Brew has helped them stay healthy.

Honestly, what more could I ask for than that? That is where the magic is!

Tell me about your Jewish roots?

My family moved around a lot when I was a kid, but elementary and high schools were in Paramus, NJ. I went to Jewish day school. I made a few teen tours to Israel in the summers.

It wasn’t until I moved alone to Burlington, VT, at 26 and knew no one that I realized how significant my Jewish roots were. It was the Jewish community there that welcomed me and became a comfortable place for me to connect with when I felt alone. The connection was instant. I have come to cherish that bond with other Jews wherever I go since that time. I am deeply proud of my Jewish heritage.

I remember my parents sending me to public school in seventh grade. When I came home from school on the first day, my mom asked how my day was. I told her it went well and that a boy in my class (who wasn’t Jewish) called me “his girl.” The next day, she put me right back into yeshiva.

Are you and your family involved in the local Jewish community?

My kids did go to Portland Jewish Academy. Now they are 13 and 15, and one of our favorite things is to have Shabbat with friends. Recently, we all went to Israel for the first time as a family and had a blast! My son, Jonah, just became a bar mitzvah and Isabelle was a bat mitzvah two years ago.

How many people work for you?

It depends on what season we are in, but on an average we have 10 people working at Fire Brew, and I love them all.

Where can we buy the brew?

We’re in all the co-ops around town. We are in grocery stores like New Seasons, boutiques like Tender Loving Empire, Barbur World Foods, Food Front Cooperative Grocery, Made in Oregon stores and some fitness facilities. Soon we’ll be in Fred Meyer!

What are your plans for the future?

I keep joking around that I’ll make tonics till I die, but that’s probably the truth. I love what I do, so I’ll just keep finding ways to bring natural, fun, crazy remedies to people as long as they keep buying them. Where it ultimately goes is anyone’s guess.