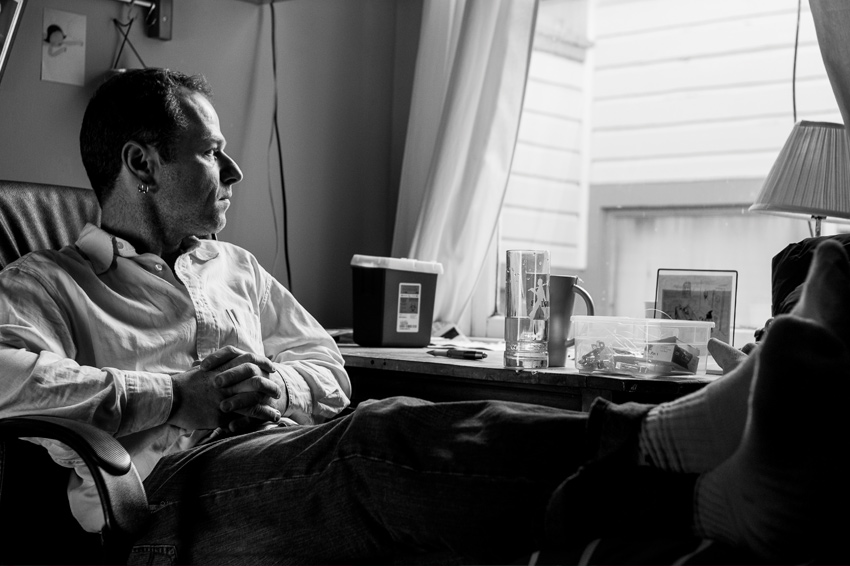 Stephen Elliott, 43, is a successful and acclaimed author and director, living in New York and New Orleans, with seven books and two films to his credit. He is a senior editor at Epic magazine, funded by Fox, which features long-form journalism that is optioned and made into movies. He is the founder/editor-in-chief of The Rumpus, an online literary magazine. And he has a new collection of essays coming out soon.

Stephen Elliott is also a victim of child abuse whose mother died when he was 13 and who was raised by the state of Illinois for much of his teen years. He was a runaway, a drug addict, a stripper and a homeless guy who lived in his car. The New York Times Book Review called his, semi-autobiographical Happy Baby, “the most intelligent and beautiful book ever written about juvenile detention centers, sadomasochism and drugs.”

So you may be wondering why Stephen Elliott is also the featured speaker at the Jewish Family & Child Service annual luncheon to be held May 19 at the Multnomah Athletic Club in Portland.

His story has more ups and downs than the Cascade Range. Stephen grew up in a nice neighborhood on the north side of Chicago. His home life, however, was not so nice. When Stephen was 8, his mother was diagnosed with multiple sclerosis; Stephen and his sister took care of her at home. His father was in real estate and was himself a writer. As a father, however, he was negligent at best and verbally and physically abusive at his worst. When Stephen was 10, he was already experimenting with drugs and running with the wrong crowd. It was also at 10 that he turned to writing as an outlet. He wrote on paper, on the walls of his room, anywhere.

Stephen desperately wanted to run away, but his mother begged him to stay. When she died, Stephen was 13 … and he was outta there, living on the streets, on rooftops, wherever he could. He attempted suicide several times and has the scars on his arm to prove it. It was after one such attempt, at 14, that the police came, finding him lying in a doorway. They asked him where his parents lived; he replied that he didn’t know. (Actually, as he reported to The Chicago Sun Times, that wasn’t true. “He knew where one of them was. But his father … had up-and-moved without leaving a forwarding address.”)

So Stephen became a ward of the state, and he eventually came to sample just about all the state had to offer kids like him: foster care, group homes and juvenile detention.

The first thing they did, though, was put him in a public mental hospital because of the suicide attempt. “This was a bad place on the edge of the city where they warehouse people,” Stephen says. “There were no towels, no soap: you dry yourself off with a bed sheet. It has since closed down for all kinds of health violations.”

It happened, though, that there was a program where the kids could go to a nearby synagogue once a week with the adults in the adult ward. Stephen actually was Jewish, via his Jewish father, but he didn’t feel Jewish and wasn’t raised with any religion at all save an occasional Christmas. Nevertheless, this program appealed to him.

“We weren’t allowed to smoke in the facility, but we could smoke there,” he remembers with a laugh. “And they had really good food – cake and stuff. These black kids and I would go, not because I was Jewish but because we could smoke and eat.”

He was now on the radar screen of the Jewish community.

When the mental hospital released him after three months, Stephen went to a very tough group home. Stephen was sent because he had a record of running away; the other kids were there because of their violent records. As a result, Stephen continued to run away – a lot. After six months, even a place this tough kicked him out.

There weren’t many options left.

“They were going to put me in a horrible place, a locked facility near Wisconsin,” says Stephen. “But instead, I got picked up by the Jewish Children’s Bureau, a program of Jewish Family & Child Service. They had external funding because of their fundraising, plus they had kids there who were placed by their parents and guardians, not just wards of the state, so it was a much better place and much less violent.”

Stephen was still doing a lot of drugs at 16, but the JCB facility was across the street from Mather High School, and Stephen’s attitude began to change. “They’re not better than I am,” he realized. “I want to go there. I said to the JCB principal, ‘If I get straight A’s, can I go there?’ He said yes, so I went off drugs and got the A’s.” Stephen completed four years of high school in 2½ years, and he was off.

“I credit JCB with this. I wasn’t good with adults. But they gave me a place that was stable and nonviolent, a place where I could make the changes I needed to make. There would have been no way to do that in a place where every day I was fighting for my life.”

The JCB also gave Stephen money for college, and off he went to the University of Illinois. The road ahead was still rocky, however. He dropped out of school after three years and spent time in the red-light district in Amsterdam, did more drugs and made more bad decisions. Yet, when he returned to school, he won a short story competition in his senior year. He continued writing back in Chicago while working as a stripper and doing more drugs. He began to submit stories for publication, and he wrote a novel. He moved to San Francisco and wrote more seriously, still “on the side.”

In 2001, things turned around. Stephen was chosen for the prestigious Wallace Stegner Fellowship, which sent him to Stanford University for two years to be a writer-in-residence. There he studied writing, taught writing and sold several novels. He was now, by profession, not just by inclination, but officially: a Writer.

Then and ever since, Stephen has done what he needed to do to steer his life in his chosen directions. He has published books, most of them about the violence, sex and drugs he himself has lived through. He travels and studies. He writes and films, edits two publications and he blogs. He hangs out with creative people who fan his own creative fire. And he speaks to groups about his journey and about the importance of taking care of our troubled youth. He freely credits Jewish Child & Family Service for its pivotal role in his own saga.

“I like Stephen’s edginess and drive in overcoming a lot that could have made his life go elsewhere … or maybe nowhere,” says Miriam Hecht, chair of this year’s JFCS Celebrating Our Caring Community luncheon. “He is smart, creative and embraces what makes him tick differently. Stephen is also a model of how much of a difference a Jewish social service agency can make in someone’s life.”

In 2005 Stephen was invited to join Steven Spielberg and a group of artists who are, he says, “culturally influential and Jewish” at a luxurious weekend to talk about art and culture, to “move the needle,” as it were. “For me, the needle had a long way to move. It was the first time I hung out with Jews who are my peers, and it’s amazing how much we have in common.” Little things, like a shared sense of humor and a love of lox on a bagel. It also, he says, explained a lot to him, like “why I was drawn to Israel even though I didn’t think of myself as Jewish. It’s almost like being Jewish is in your blood.

“I am privileged,” says Stephen, but he isn’t talking about money. “People who are poor but are doing what they want for a living, compared to people who have to go to a job they don’t enjoy: that’s my definition of privilege. A lot of people may have more money than I have, but that I can choose my work, I feel fortunate.”

Portland’s Jewish Family & Child Service Interim Executive Director Carrie Hoops says, “For me, Stephen is a reflection of why the services JFCS provides in our community are so desperately needed. As Stephen has said, ‘There is lots of funding for people who are doing well.’ What JFCS does is to help create a fabric of support for those that are the most needy. (Without this) Stephen’s life would most likely have had a different – and dire – outcome.”

Jewish Family & Child Service’s Celebrating Our Caring Community Luncheon featuring Stephen Elliott will be May 19, 11:30 am-1 pm, at the Multnomah Athletic Club in Portland. To reserve your free tickets, visit jfcs-portland.org or call 503-226-7079, ext. 111.