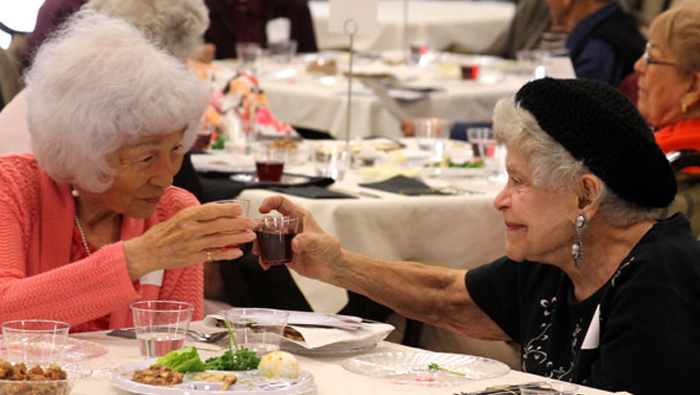 Since taking her position as the social service coordinator for the Jewish Federation of Lane County in October 2013, Oriana Kahn Hurwit’s work has increasingly centered on the elder, senior and aging baby boomer populations in Eugene. During visits to senior care communities, she became aware of the need to develop educational programs targeting cultural competency for providers of senior care services.

“Many of our Jewish elders have vastly different experiences from other West Coast seniors,” says Oriana. “Some are first- or second-generation immigrants who learned English as a second language. Many formerly lived in predominately Jewish areas of larger cities of the Midwest or East Coast, only coming in recent years to join their adult children here.”

Oriana says that many are now in settings with only a small numbers of Jews in their social sphere. “Many have said they feel ‘alien’ here,” she adds. “Additionally, Jewish holidays are rarely marked and frequently overlooked in care communities. It’s not uncommon for our seniors to be surrounded by Christmas or Easter decorations covering the walls during those holidays, or for residents to be encouraged to attend Sunday church services.”

To address this issue, Jewish Family Services hosted “Jewish Culture and Traditions,” an educational program followed by a bagel brunch on May 28. Twenty-four senior care providers attended, including staff from Senior and Disabled Services, in-home health care services, hospice workers and residential care communities. Oriana and federation volunteer Abby Gershenzon designed and presented the hour-long program. It included an introduction to the federation and a glance at Jewish history (from 1800s Europe until today). Oriana and Abby  shared personal family stories to bring that history to life. An explanation of Yiddish and the role it played for many of Jewish elders was included, as well as highlights about kashrut, the lunar calendar and a Power Point presentation about Jewish holidays. Abby and Oriana also provided activities that care facilities can use to bring awareness and celebration to the whole community, whether Jewish or not. A representative from Temple Beth Israel’s Hevra Kadisha talked about Jewish end-of-life traditions. To conclude the program, a Jewish community member spoke about bringing her mother from New York City to live here.

Since then several care community professionals who were unable to attend contacted the federation asking to be invited to future programs. Invitations were also extended to “take it on the road” and offer the presentation at three other venues, including the Senior Companion Program, part of the National Senior Service Corps. A future program is being planned, but no date has been set.

Debbie Rose Libeskind is the secretary for the Jewish Federation of Lane County.