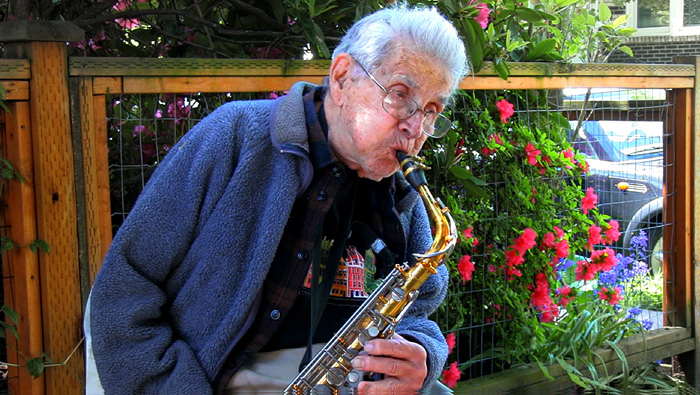 EDITOR’S NOTE: Less than a week after the issue with this article was printed, Frank Wesley passed away at the age of 97. He died  at 6:30 in the evening on May 26, 2016. He was surrounded by the love of his family and friends and received visitors until the very end.

When David Bee, a filmmaker from Brooklyn, was relocating to work on a film project in Portland in 2009, he moved to a house/studio across the street from Frank. Hearing saxophone melodies floating through the evening air, David stepped outside and found Frank sitting across the street playing his sax. Reminded of his Brooklyn roots and love for jazz, he wandered across the street and introduced himself. This led to regular conversations about jazz, lyricists, composers and a big connection over Johnny Mercer, who wrote about dreams, disappointments and hopes. These conversations developed into a four-year film project called “Frank’s Song.” It premiered last year at Portland’s Hollywood Theatre. The Oregon Jewish Museum and Center for Holocaust Education also screened the film in November.

David arranged for me to meet Frank at his home in the heart of the Hawthorne District, close to Frank’s favorite coffee shop, Stumptown, and the Bagdad Theater.

His is a survival story about embracing life no matter what unfolds. Frank Wesley was born in 1918 in the Province of Silesia, which at that time was part of Germany. It is now part of Poland. Frank grew up in a well-to-do family that lived on a farm with servants. His father owned several pharmacies. Frank was 20 when he was arrested and put on a train to Buchenwald. It is estimated that between 1937 and 1945 some 56,000 prisoners perished there. Frank, chained to other men, was there to haul rocks from the quarry to build the Autobahn from Dresden to Berlin.

Following is a Q&A with Frank (his answers have been edited for brevity and clarity).

You have lived a lot of life. How do you do it?

I really seriously do not know.

It was 1937; it was in the middle of the night when I was arrested by a family friend who was a police officer.

What do you mean when you say it was a family friend?

We had one bicycle shop in our town. I knew the man because I bought tubes for my bike from him. He was a friend of my dad’s.

What do you remember about the camp?

I was the first one in the truck on the way to this camp. It was a bumpy ride. I remember big metal gates. I was surprised it was a big space with bright lights all over. There were 10 or 20 people that were shaving hair. I remember I learned to show no emotion. It was important to be useful and not a threat. These were survival skills.

How long were you in that camp?

I was there seven months working in a quarry. We all had a number. One day over a loudspeaker they said my number. I was told I had three days to get out of the country.

This was the happiest day of my life. From that day on, I was never going to be angry.

Did you legally leave Germany?

I had all the papers, but my weight was not acceptable. I lost 40 pounds in prison and was not fit to qualify for an American visa. I had three days to get out of Germany or I would go back to camp. I had a friend in Belgium. I walked over the border at night. My mother’s father was an American. He sent me money for the entrance visa. The ship left in January. I remember it was rough sea. An older cousin in New York met me, and we went by train to Bainbridge, GA.

I understand you always loved jazz. Did you meet any famous players when you were in the South?

I saw Louis Armstrong in Atlanta. The black people could listen from the downstairs and dance.

What was your first job in America?

In Georgia I worked for an exterminator. His wife played the piano, and I sang while she played. I sang in German. I fell in love with her. I figured I should leave.

Where did you go?

People from the shipyards had some money. There was always dancing. We danced on the ferry to and from the yards. It would hold almost a thousand people. We would get on it to get to the shipyards in St. Johns. It would take an hour. We had our lunch boxes and a jukebox was playing. The city was a friendly place because everybody was a foreigner. There was always dancing and music playing.

You got your citizenship and immediately enlisted. Why go back to Germany and fight?

I really thought we had to win the war with Hitler. It was a sense of duty. When I got my American citizenship, I enlisted.

(Because he could assist with intelligence as an interpreter, Frank was the only person in his training unit sent to Europe. By a twist of fate, he was assigned to the troops being sent to liberate the camp he suffered in years earlier.)

What do you remember?

The Nazis ran out of petrol, so there was no way to dispose of bodies. They were piled five high all around. Some alive and nothing we could do.

The liberation of Buchenwald was the beginning of the end.

(When Frank returned to America, the free college tuition through the GI Bill enabled him to enroll at Reed College. After graduating with a bachelor’s in psychology, he went on to Washington State University for a master’s degree and then a 50-year tenured career at PSU.)

You were 70 when you got a saxophone and started taking lessons. Do you feel fulfilled?

Always, I never thought about it. I didn’t think I had a mission I couldn’t fulfill. The very best humans can feel is probably pain free. If you get lucky enough to find pleasure, stick with it. I am working on the last chapter – what I recommend and have pleasure doing. I like to go for walks. I like to go to Fred Meyers and impulse buy. I like bus trips, just for the ride. If I write one page I feel fulfilled. Jazz, chocolate, friends, family and living in the coolest place … my neighborhood.

I hear you have a favorite saying. Could you share it?

You have to cheat a little for joy.