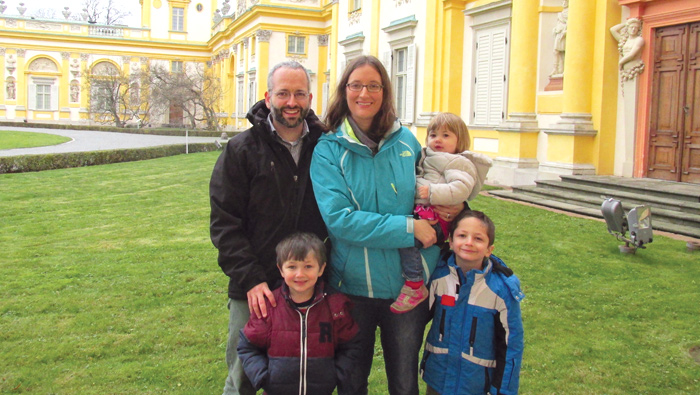 After being crushed by the Nazis and further diminished by Soviet-era communism, it hardly seems likely that Warsaw, Poland, could nourish anything resembling a thriving Jewish community today. And yet, support for Jewish culture is emerging from some very unlikely sources.

Last summer, Eugene’s Rabbi Boris Dolin and his wife, Sarah, left Oregon to accept pastoral and educational positions in Warsaw and surrounding communities. For the past half year, they’ve been busily expanding on their efforts to rebuild Jewish life there, aided by forces they hadn’t known existed prior to their arrival.

“Two of the most surprising elements are how absolutely unique this community is and how enthusiastically non-Jewish Polish urbanites are celebrating Jewish culture,” Rabbi Boris recently told me via a Skype connection from his Warsaw apartment.

When I asked him to define “unique community,” he replied: “A generation or two ago, many members of my congregation didn’t even know they were Jewish. In some cases, there had been a deathbed revelation from a parent or grandparent, who admitted having to hide their Jewishness from those trying to annihilate or oppress them decades back. Others discovered they’d been adopted as babies by Christian neighbors long ago in a last-ditch effort by desperate parents to save them. And for many, a visit to the 2-year-old POLIN Museum of the History of Polish Jews, built on the site of the tragic Warsaw Ghetto, revealed to them their Jewish roots and ancestors through an examination of freely available archival material. (Polin is Hebrew for Poland and ‘rest here.’) Of course some people in the community had no Jewish roots and chose to convert, or were simply raised Jewish.”

Rabbi Boris’s progressive Jewish congregation, Beit Warszawa, has been a beacon to young adults and others who’ve discovered that somewhere along the line they had Jewish roots. “We can’t call them converts to Judaism,” Rabbi Boris insists, “because they’re more like returnees. Our job is to re-educate them on what it means to be Jewish and how to celebrate that.”

Those wanting to rejoin the Jewish community after a generation or more of assimilation are finding that it’s an easier transition doing so with a liberal congregation than entering the Orthodox life of Nożyk Synagogue, the only surviving pre-war Jewish house of prayer in Warsaw.

“Beit Warszawa is a member of Beit Polska, the umbrella organization for Progressive/Reform Judaism in Poland,” Rabbi Boris explained. “We operate as a full-fledged synagogue with regular Friday night and Saturday morning services and, of course, all the Jewish holidays.”

, Michael Schudrich, the leader of Nożyk Synagogue and the Chief Rabbi of Poland for the Orthodox community, is also an American whom, like Rabbi Boris, spent time in Japan and is conversant in Japanese.

“In fact, our first greeting was in Japanese,” Rabbi Boris said. “We do find opportunities to work together, but since Beit Warszawa was formed in 1995, and Nożyk Synagogue came into being in 1902, they’ve had time to develop a more established community despite the losses of wartime and serious pre- and post-war emigration to the U.S., Canada, Argentina and the Land of Israel.”

, Sarah and their three children are trying to learn Polish as efficiently as possible – the rabbi with a hired tutor and the kids through interacting with other children in a Montessori school where Sarah also teaches.

“Most of my congregation understands some English and many are fluent,” Rabbi Boris told me. “There’s also a part-time translator who assists with services and classes, but hopefully I can become moderately conversant by the end of my first year here. This is especially important for the smaller communities around the country such as Gdansk and Konstancin-Jeziorna, where I travel on a regular basis to help strengthen and train lay leaders to take over some rabbinical duties in lieu of having a full-time rabbi. One local woman who started out like that is now completing her studies in New York.”

High tech comes into play in the form of a Google translation app on Boris’s smart phone. “I speak an English sentence into it, and the electronic voice repeats it in Polish, kind of like the translator gadgets we used to see on Star Trek,” Rabbi Boris said.
I had to ask Rabbi Boris about anti-Semitism because it seems so closely tied to Polish history. True, Jews found a safe haven in Poland more than a thousand years ago, and for a while between the 16th and 18th centuries about 80% of Diaspora Jewry lived on Polish lands. That period of relative calm, however, was followed by pogroms, Cossack massacres, impoverishment and eventually the Holocaust, in which 85% of Polish Jewry was destroyed. But what about today?

“This was another unexpected twist,” Boris replied. “Today you can find klezmer music, Yiddish theater and Israeli film fests, all performed or supported by non-Jewish Poles! At least in the main urban areas, the Jewish mystique is culturally cool. There are lots of Jewish celebrations, but one of the biggest, sponsored by the Jewish Center on Twarda Street in Warsaw, is the annual festival called Open Twarda Street. Nearly 10,000 people attend each May!”

In addition, Rabbi Boris pointed out, “Kosher restaurants can be found in Warsaw and Krakow, and there are also a few cultural organizations in both cities such as a JCC and Jewish theater. Out in the countryside, though, many younger people have never even met a Jew, and some anti-Semitism remains. On the other hand, the recent win by right-wing political parties had more to do with returning to traditional Catholic conservatism rather than being anti-anyone, and no groups that may have been openly anti-Jewish gained any representation.”

For those wondering if Oregonians might be able to contribute something to Beit Warszawa’s dynamic and creative revival of Polish Jewry, Rabbi Boris recommends visiting their website Beit.org.pl, where he has a blog, and people can donate to the synagogue and to Beit Polska.

Rabbi Boris said, “We are about so many things: Jewish identity-building, renovating Jewish synagogues and cemeteries throughout the land, connecting American Jewry with their Polish heritage, and changing the narrative from one concerned only with Judaism’s deep and tragic past in Poland to one embracing a far brighter future.”

Joseph Lieberman is a freelance writer in Eugene.