Please join Congregation Beth Israel as we celebrate Dr. King’s enduring legacy and welcome Congresswoman Terri A. Sewell as our keynote speaker. Our service will include music from the NW Gospel Choir and CBI’s Kol Echad Choir. Free and Open to the public. 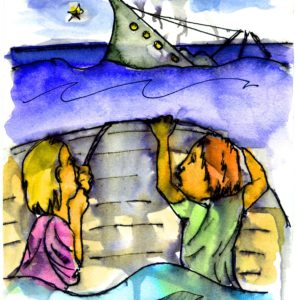 A True Story of Two Teenagers Who Did Not Give Up

A co-production with Northwest Children’s Theater

Lifeboat is the extraordinary true story of Bess Walder and Beth Cummings. Set during World War II, it is a story of courage, a story of survival and a story of enduring friendship.

On Friday the thirteenth of September 1940, a ship, The City of Benares, set sail from Liverpool bound for Canada. On board were 90 child evacuees escaping the relentless bombing and dangers of war torn Britain. Four days into the crossing, the ship was torpedoed and sank. Only 11 children aboard survived. Of those few, two young girls, Bess Walder (15) and Beth Cummings (14), clung to life as they spent 19 terrifying hours in the water on an upturned lifeboat. With the hopes and dreams upon which they’d set sail, they buoyed one another’s spirits with stories of home, family and adventure. Bess and Beth inspired each other to survive. Lifeboat tells their story.

“At its core, Lifeboat is a play about resilience,” said play Director Avital Shira, daughter of Portland Rabbis Laurie Rutenberg and Gary Schoenberg. “These two young women defy the odds through connection, story and the will to save the other to ultimately survive longer than humans should be able in the middle of the Atlantic.  The world is dark at the moment, and it’s especially important now to harness the power of human resilience and remind ourselves that if we find our common humanity, we have the ability to keep each other afloat.”

“Lifeboat packs a wallop because it is fundamentally about life, death and the human spirit. Oh, and it’s a highly entertaining history lesson too: informing the young and reminding the old.”
Theatre Review, New Zealand

This is a true story centered around two teenage girls during the evacuation of British children during World War II. Know as “Operation Pied Piper,” the British evacuation of children began on Friday, September 1, 1939. The ship the young girls in this story were sailing on was the City of Benares. It was carrying 191 passengers (90 of them children) and 216 shipmates, 407 souls all told — 260 perished (79 children) and 147 survived (11 children). Details about this ship and its demise are here.

The Jewish Community Center Association of North America (JCCA) has invited the MJCC to send a delegation of athletes and artists to the JCC Maccabi Games® and ArtsFest®!

We plan on expanding our delegation this coming year when we head down to California to represent our community. If you or someone you know is interested in joining our delegation for this summer, whether as an athlete or artist, please contact Len Steinberg at lsteinberg@oregonjcc.org or 503.535.3555. Commitments must be made by February 23, 2018.

This class is based on the work of Rabbi Zalman-Schachter Shalomi z”l of the same title. We will be using his book as well as Conscious Aging: Cultivate Wisdom, Connect with Others, Celebrate Life – a curriculum published by the Institute of Noetic Sciences – as guides to stepping into the role of Elder and Sage. This is not just for the “hoary heads” among us but all those who wish to be conscious about moving into our advanced years with grace and wisdom.
And, baruch Hashem, Dr. Victoria Howard, who taught at Naropa University WITH Reb Zalman z”l and specializes in conscious aging will be enriching the class with her expertise. Please see her bio below:

Victoria Howard, PhD, LPC:  Dr. Howard has a doctorate in Clinical Psychology specializing in issues of aging. Her dissertation was titled Suffering and Insight: Life Review with Older Adults. She was a co-founder of the MA Gerontology Program at Naropa University and helped to create the Masters in Divinity Program at Naropa where she taught the Pastoral Care Track. Dr. Howard is an authorized Meditation Instructor in the Shambhala Buddhist Tradition and a teacher of Buddhist Psychology.

She has helped to found two homecare agencies in Boulder, Colorado and provided consultation and staff training for small group homes for frail elders. She also trained volunteers at Hospice Care of Boulder & Broomfield Counties. Dr. Howard is a published author and a Licensed Professional Counselor in private practice working with older people and their families. Last but certainly not least, she is a grandmother of three and a great grandmother of a wonderful four year old and a brand new baby.

This class will be a minimum of eight sessions. Free for TBS members and their families; non-members can check out one class for free, after which the course is $90.

Learn to play this ancient game. It will give your mind a workout!

Take your game to the next level. It will give your mind a workout!

Learn the art of Jewish storytelling with professional storyteller Brian Rohr. In this nine class course, Brian will teach the art and skill of performative storytelling, exploring the ancient stories, personal narrative and techniques on how to discover your own unique storytelling voice. Tuition for the three month course is: $150 CNS members / $200 Non-members. 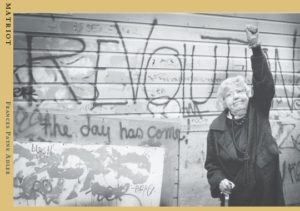 Reading with Frances Payne Adler, author of Making of a Matriot
In The Making of a Matriot, author Frances Payne Adler demonstrates—through poetry and prose—the need for a new conception of national defense through peaceful means, and provides a glimpse of the possibilities.
Definition: Matriot, noun. 1. One who loves his or her country. 2. One who loves and protects the people of his or her country. 3. One who perceives national defense as health, education, and shelter for all the people in his or her country, and the world.
“If national defense is the issue, why not, as poet-activist Frances Payne Adler suggests, a ‘national defense’ budget that defends the people through affordable health, education, and shelter for everyone?”
—Adrienne Rich, in Arts of the Possible
“These poems touch and explore the core of human existence—the wars, the illnesses, but also the love, the courage, the defiance, of which her own writing is an example. Her definition of ‘matriot’ alone makes it worthwhile opening the book.”
—Howard Zinn, author, People’s History of the United States
http://www.broadwaybooks.net/event/frances-payne-adler-making-matriot

Poet Frances Payne Adler is the author of five books: two poetry collections, Making of a Matriot and Raising The Tents, and three collaborative poetry-photography books and social action art exhibitions with photographer Kira Carrillo Corser, which have shown in galleries, universities, and state capitol buildings across the country, as well as in the U.S. Senate in Washington, D.C. Adler, along with Diana Garcia and Debra Busman, co-edited Fire and Ink: An Anthology of Social Action Writing, winner of the 2009 ForeWord Book of the Year Award for Anthologies. Her current exhibition, Dare I Call You Cousin, is about the Israeli-Palestinian conflict and is a collaboration with Israeli artists, photographer Michal Fattal and videographer Yossi Yacov. Adler has been awarded a National Endowment for the Arts Regional Award, a California State Senate Award for Artistic and Social Collaboration, and the New Millennium Obama Award. Adler, Professor Emerita and founder of the Creative Writing & Social Action Program at California State University Monterey Bay, lives in Portland, Oregon.
Read more
Jan
17
Wed
OJMCHE Exhibit Tours @ Oregon Jewish Museum and Center for Holocaust Education
Tickets
Jan 17 @ 1:00 pm – 2:00 pm 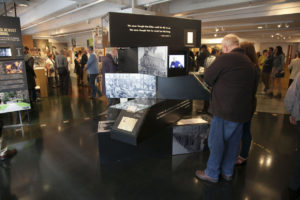 OJMCHE has exhibition tours every Wednesday at 1 pm.
Tours are free with admission and members, of course, can always visit for free. Come early or stay after and enjoy lunch in the museum’s Lefty’s Cafe!
Please join OJMCHE for weekly public tours of the newly reopened museum galleries. Tours last one hour and are lead by museum staff.

Vedem: The Underground Magazine of the Terezin Ghetto

Vedem Underground examines the literary magazine written by Jewish teens imprisoned at Terezin, a Nazi camp in Czechoslovakia during the Second World War. Using pop-art graphics, drawings and paintings, and the prose and poetry, these brave adolescents secretly wrote and illustrated the longest-running underground magazine in a Nazi camp. Vedem (Czech for “In the Lead”) documented their voices with defiance, humor and heartbreak. The exhibition breaks down their 800 original pages and reconstructs them in the form of a contemporary magazine. Curated by Rina Taraseiskey and Danny King.

To Tell The Story: The Wolloch Holocaust Haggadah

On view in the East Gallery: Commissioned by Helene and Zygfryd B. Wolloch, The Holocaust Haggadah is richly illustrated with lithographic prints by David Wander and calligraphy by Yonah Weinreb that link the story of liberation from ancient Egypt to the Holocaust.