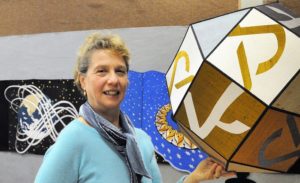 Artists Sara Harwin, Kanaan Kanaan and Inga Dubay love letters. They explore the tradition of sacred letters in Hebrew, Arabic & English calligraphy in many forms of art expression. They each have a creative voice dedicated to peace & justice.
Their will be an opening forum for the exhibit at 7 pm June 2. This event is open to all.

“Inga Dubay, Kanaan Kanaan and I come from three different lettering traditions, yet when we each speak about our journeys, we seek to touch upon a sacred, spiritual path,” says Sara. “We will be speaking on the evening of  June 2 at 7 pm preceding the Interfaith Iftar, traditional breaking of the fast during the month of Ramadan.”

During the exhibit, there will be activities on the MET community calendar where the show will be accessible (check the MET calendar https://www.metpdx.org/index.php/outreach/upcoming-events).

Sara Harwin
Sara was feaatured on the February 2014 cover of Oregon Jewish Life in conjunction with the exhibit she created: “Illuminated Letters – Threads of Connection.”
Her love of both art-making and Jewish learning come from being raised in a home filled with Yiddishkeit, Her early Jewish education at the Sholem Aleichem Institute in Detroit, Michigan and many years at Camp Tamarack enriched her sense of Jewish community. Later, she studied Hebrew and art history of the Middle East at the University of Michigan where she completed a Bachelor of Fine Arts Degree. At Michigan she gained first-hand experience in printing under the tutelage of artist and author Emil Weddige. Upon her arrival in Portland, Oregon in 1969, she went on to study clay work with Wally Schwab at Marylhurst College, incorporating her figurative approach to art onto dishware and freestanding sculptures. Her work has been exhibited internationally in numerous group and one-woman gallery and museum shows, while her ritual items are widely treasured by individuals and communities.

Inga Dubay’s work encompasses calligraphy, painting, drawing and printmaking. She taught at the Oregon College of Art and Craft for twenty-five years and was Book Arts Department Head for six years. Inga currently teaches at the Sitka Center for Art and Ecology. She has also taught at Portland State University for eight years and has conducted numerous workshops including as faculty at international calligraphy conferences. She has been a guest lecturer at Reed College’s Paideia, Scriptorium, and Art Department. She studied at Mills College and received a B.A. in Painting & Drawing from the University of Oregon with graduate study at the Art Academy in Oslo, Norway, the University of Oregon and the University of California at Berkeley. Her work has been shown nationally and internationally in juried and invitational exhibitions as well as shown in publications including Letter Arts Review, Lettering Arts and featured on Art Beat, Oregon Public Broadcasting. Her essay, The Write Stuff, appeared as an Op-Ed in The New York Times.

Mr. Kanaan’s background is both interesting and diverse. He was born and raised in Amman, Jordan, in a Palestinian refugee camp. An artist by training, Kanaan studied at the College of Fine Arts at Baghdad University prior to immigrating to the U.S. in 1994. After moving to Portland, he obtained his bachelor’s degree in Fine Arts and Graphic Design from PSU 1999, and in 2006, earned his Master of Fine Arts in Painting and Mixed Media from Warnborough University in Ireland. For the eight years, Kanaan was an adjunct professor in PSU’s art department where he’s taught courses in interactive media, Web design and computer graphics. Since 2011, he is serving PSU as the Middle East Student Retention Specialist. He continues to be an active artist, regularly participating in both solo and group shows. 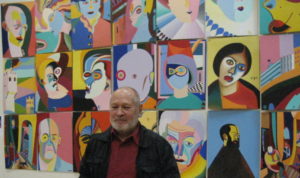 Boris Uan-Zo-li’s artwork reflects his fascinating life, big, bold, varied and colorful. His work is abstract, but his figures are identifiable like the portraits of Woody Allen and personal hero Bob Dylan. Boris was born in Moscow, Russia, in 1938. During the Soviet times, Boris participated in four exhibitions and at one of the exhibitions in the USSR his paintings were withdrawn from the gallery by the Soviet bureaucrat because they did not fit the communist vision. After the fall of communism, Boris’s paintings were exhibited in a number of places, including the Central House of the Artists, one of the most prestigious Russian exhibitions.

This timely and thought-provoking drama portrays a very different view of the personal impacts of war in a touching study of intergenerational trauma and the painful dysfunctions that continue to haunt an entire family. The play is full of music, and discussions of art, philosophy, culture, science and politics on a world stage. As details of the story lay out the facts of the past, the audience can’t help but be reminded of the political climate of the present.

Not suitable for children. 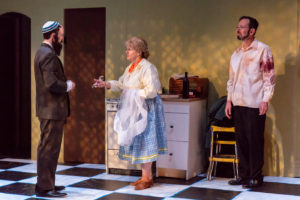 “When fascism comes to America, it will be wrapped in the flag and carrying a cross.”

This well-known anonymous statement from the 1930s (often erroneously attributed to American novelist Sinclair Lewis) is a prophetic warning about the rise of authoritarian regimes. With the recent tragic events of Charlottesville and other flashpoints of intolerance in the news, assaults on members of the LGBTQ community and racial, religious and ethnic minorities, attacks on a free press, and the rise of voices advocating extreme nationalism throughout the civilized world, many say that our current time is reminiscent of the advent of World War II. However, the real test of our time is to avoid the trap of reactionary fear and to commit to healing change. Adroit Maneuvers offers a compassionate, hopeful perspective on bridging these divides that threaten to fracture our humanity.

The play is set in New York City in 1996 at the Dinger family home. The story revolves around an elderly grandmother, Tilde, and her adult grandson, Micky, who comes back to the city for a final visit. Micky is determined to get Tilde to open up about her experiences during the Anschluss in Vienna. Until this point in her life, Tilde has never spoken about living through the Nazi invasion and World War II. As Tilde tells her story, her memories come to life and the characters from her past enter to relive vignettes from the golden era of Vienna’s famous café society. Micky discovers Tilde’s acts of selfless courage and her friendships with world-class figures of the day: Sigmund and Martha Freud, Albert Einstein, and members of the Vienna Philharmonic Orchestra. Tilde’s story is interwoven with true historical events, and hearing her story gives Micky the courage to be open for the first time about his own deep-rooted secrets.

This timely and thought-provoking drama portrays a very different view of the personal impacts of war in a touching study of intergenerational trauma and the painful dysfunctions that continue to haunt an entire family. The play is full of music, and  discussions of art, philosophy, culture, science and politics on a world stage. As details of the story lay out the facts of the past, the audience can’t help but be reminded of the political climate of the present.

In October 2017, actor/director Tom Hanks said, “If you’re concerned about what’s going on today, read history and figure out what to do because it’s all right there.”  Adroit Maneuvers delves into the history of intolerance and brings us to the realization that we have the power to rise above it all through devoted relationships, humility, compassion and forgiveness.

Join us for a special tour of R.B. Kitaj, A Jew Etc., Etc. with Bruce Guenther, Adjunct Curator for Special Exhibitions.

Free with admission; free for members!

Join us for a fun, introductory Israeli dance class. All levels are welcome. Six people needed to run class. The class starts July 11 and continues every Wednesday through Sept. 12.

In the Dance Studio

Beginning on Thursday, June 21 from 5-6 pm, Rabbi David Zaslow will teach an introduction class in Kabbalah Meditation. Participants will learn to understand the chakra system in Judaism known as Sefirot. Rabbi David will uncover the secrets of Jewish mysticism in simple and accessible language, and in ways that can benefit daily life. Class will take place on four Thursdays: June 21 and 28, July 12 and 19 from 5-6 pm. Class fee is $30 and pre-registration is requested by calling 541-488-7716. Available via live streaming for those unable to attend in person. The Havurah Synagogue is located at 185 N Mountain Ave., Ashland.

Bring your family or join your child at MJCC day camp for a special Shabbat. Enjoy a Shabbat set to the theme of camp this week with stories, songs and more.

Free and open to the community. 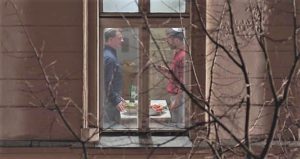 Thomas, a young German baker, is having an affair with Oren, an Israeli married man who has frequent business visits in Berlin. When Oren suddenly vanishes from Thomas’ life, he decides to travel to Jerusalem seeking for answers regarding Oren’s disappearance. Under a fabricated identity, Thomas infiltrates into the life of Anat, his lover’s wife, who owns a small Café in downtown Jerusalem. Thomas starts to work for her and create German cakes and cookies that bring life into her Café. Soon, Thomas finds himself involved in Anat’s life in a way far beyond his anticipation, and to protect the truth he will stretch his lie to a point of no return.