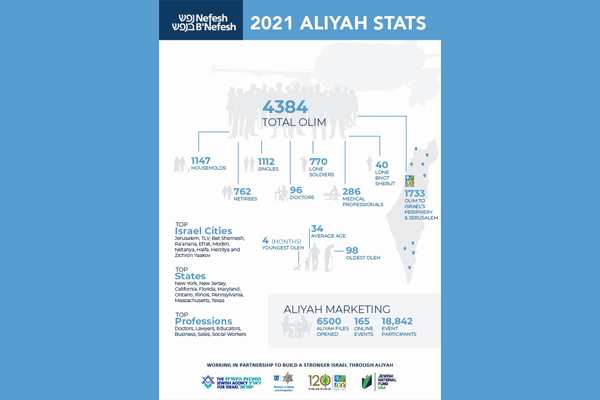 Aliyah (immigration to Israel) surged in 2021, with the 27,050 new arrivals from across the globe representing a 30% increase over the previous year’s 21,820 olim (immigrants), according to statistics released today by the Ministry of Aliyah and Integration, The Jewish Agency for Israel and Nefesh B’Nefesh.

This past year also brought a record-breaking 4,000 olim from the United States, who arrived in Israel with the assistance of Nefesh B’Nefesh. This immigration from the U.S. constituted a 30% increase over 2020 and the highest annual number of olim from the USA since 1973. Another 400 olim arrived this year from Canada, bringing the expected total of olim from North America in 2021 to over 4,400.

The Aliyah numbers also show a 40% jump in immigration from France this year compared to 2020, with the arrival of 3,500 olim, the highest number of arrivals from that country in the last four years.

Elsewhere around the world, Aliyah figures for 2021 included 7,500 olim from Russia this year, an increase of 10% from 2020; 3,000 olim from Ukraine, up 5%; and 1,636 immigrants from Ethiopia as part of Operation Zur Israel, which is expected to renew soon and reunite the new Olim with their relatives in Israel after decades of waiting.

Aliyah is facilitated by the Ministry of Aliyah and Integration and The Jewish Agency, together with Nefesh B’Nefesh, Ofek Israeli, The Jewish Federations of North America, Keren Hayesod, The International Fellowship of Christians and Jews, and friends of Israel from around the world.

Minister of Aliyah and Integration, Pnina Tamano-Shata: “Aliyah continues to break records. Despite the pandemic and its limitations, Aliyah to Israel did not stop and we’re happy to welcome tens of thousands of Olim who chose to make Aliyah this year. Olim are an incredible growth engine for the Israeli economy and are a national, economic and moral powerhouse for the nation.”

“We are thrilled to see a sharp increase, of tens of percentage points, in Aliyah from countries such as the U.S., France, Argentina, the U.K., South Africa, Australia, Germany, Italy, Belgium, and more,” said Yaakov Hagoel, Acting Chairman of The Jewish Agency. “Growing interest in Aliyah continued this year, with The Jewish Agency’s Global Aliyah Center, which provides Aliyah information throughout the day in six languages, opening almost 32,000 new Aliyah files. However, the best is yet to come – we haven’t yet maximized on the potential Aliyah.”

“After an incredibly challenging year, we celebrate each and every Oleh who made the courageous move and overcame the many difficulties and ever-changing factors over the last year and made Aliyah,” said Rabbi Yehoshua Fass, Co-Founder and Executive Director of Nefesh B’Nefesh. “The resounding interest in Aliyah that we witnessed in 2020 has borne fruit this past year, translating into an actual surge in Aliyah. As we look to 2022, our organization’s 20th year, we are excited about the future of Aliyah and look forward to helping thousands more North Americans realize their Zionist dreams.”

** All Aliyah data is based on information as of 20/12 and estimated arrivals through the year’s end. Some numbers may be adjusted after December 31, 2021.